The Brilliance of Letterman’s Netflix Show Needs No Introduction 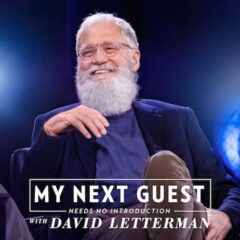 My Next Guest Needs No Introduction with David Letterman is simply brilliant. If you have Netflix, it has likely been suggested to you as a touted original series, but if you are a fan of people in general – not just celebrity or long form conversation, comedy, or anything, just people – then this show is built for you.

He definitely hand selected the cream of the crop for guests, but these celebrities and personalities are people, and David Letterman gets everything out of them. The thing about this show is that Letterman is now working because he wants to work. He’s clearly doing what he loves, which happens to be talking to people while being genuinely comically self-deprecating in a light-hearted way.

It’s similar to what made me enjoy his late night show, but in a different way. Dave was always earnest, but in the in-between bonus episodes of My Next Guest, the ones supposedly guest hosted by Zach Galifianakis and Jerry Seinfeld respectively, Dave appears at times embarrassed by his own success in late night and on Netflix.

I think Dave has found a format that is just long enough, with a conversational interview element and an on-location bit. Even the episodes shot during the pandemic are more than just two people talking to each other. This is a show that Dave has evolved into. He’s the right host at the right time with the right show. 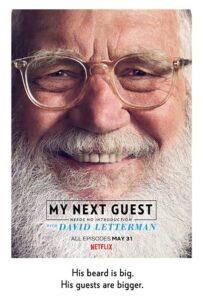 The guest list is incredible, and there is guaranteed to be someone in the mix that you are interested in learning more about if you don’t want to just start at the beginning. I would strongly encourage you to watch episodes with people you are unfamiliar with. For example, I absolutely adored Letterman’s conversations with George Clooney, Robert Downey Jr., Ryan Reynolds, and Will Smith, but I knew them.

I didn’t know of Cardi B, Lizzo, or Billie Eilish other than having heard their names, but their stories and the conversations Letterman has with them have endeared them to me. The same is true for the 2019 special episode with Shah Rukh Khan.

While this topic is certainly for another post at another time, my late night television hero was Letterman, followed closely by the guy who followed him for a decade, Craig Furgeson. To now have Letterman back with new episodes of his own show is great in my book. I look forward to more My Next Guest seasons as long as he’s inspired to keep making them.

Whoever wants to reach a distant goal must take small steps.
Fame and fortune are coming your way.
Today it’s okay to make a few choices by going with your instincts.
More Fortunes >