“The Berlin Wall is demolished. Marx is dead. Try telling that to Ramon and his desperate men hiding in the jungle cradling their AK-47’s, dusting off the slabs of Semtex and dreaming of world revolution.”

That’s merely the start of the inner dust jacket description on MAMista, Len Deighton’s novel that breaks away from the Samson-verse. It’s classic Deighton moved from espionage and Europe with dalliances in America and Mexico to revolution in Spanish Guiana and the South American rainforests.

The coming together of the cast of characters is, as cliche as this is, a slow burn, but once all the parties involved are together, the book is hard to put down. And who are they?

Ralph Lucas is an Australian doctor looking to confirm the needs of the people of Spanish Guiana for a charitable organization out of England. 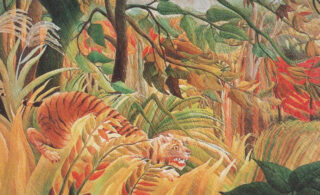 Angel Paz is a hot-headed hoodlum of impressionable passion with a dangerous streak and the arrogance of youth from California.

Gerald Singer is the “tough, black warrior, with an indomitable sense of humour,” who was there when the others arrived.

Inez is the femme fatale with hints of both espionage and public relations know-how who is working for the revolution and the leader who stirs the four of these characters together is General Ramón.

Ramón isn’t the straw that stirs the drink entirely. There are circumstances surrounding the revolution that are larger than he. But he is, as Deighton describes, “the mystery man that chaos and revolution always attracted.” We see Ramón through the eyes of the four characters. Deighton changes perspective as it suits the narrative, and it works to great effect.

All of Deighton’s detailed descriptions that act as scene-setting and metaphor have been moved from the concrete jungle to the real one, and he leaves no stone unturned. But perhaps even more than the action and interpersonal complexities of the Ramón and our four main characters, is the ongoing discussion about revolution, politics, and beliefs that happens between any number of characters.

My favorite discussion belongs to Lucas and Singer:

‘Religion and politics have no place in a soldier’s life,’ said Lucas, who seemed as stolid and unemotional as ever.
‘They had no part in life when you were a soldier,’ Singer told him. ‘Things have changed. Now men fight for their beliefs and for no other reason.’
‘Men were doing that in the Middle Ages,’ said Lucas, ‘but what did they decide by their fighting?’
‘That you would not be born Catholic?’
‘How do you know I’m not a Catholic?’
‘That self-righteous air of impartial superiority.’ 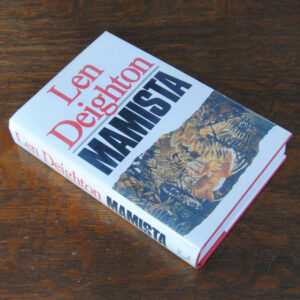 Yet another character, John Curl, a national security advisor for the President of the United States, shines some light on our characters’ circumstances and how they’re connected to people in positions of power and even the public at large.

This book has everything that the Samsonverse has had in terms of details, world events, and economics, as well as the detail that Deighton applies to his non-fiction works. It somehow feels even fresher because he has not written at large this much about South America.

It’s fresh, hot, humid, complicated, and human in a way that only Len Deighton dropped into the jungle could be. That means it should be on your bookshelf.

Read the Secret File of technical information and quotes from MAMista by Len Deighton.

Nothing in the world can take the place of persistence.
Even a broken clock is right two times a day.
A difference, to be a difference, must make a difference.
More Fortunes >