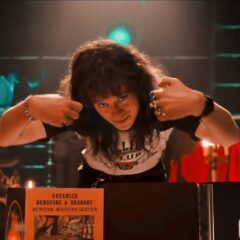 I’ve written about it here and spoken of it on my podcast in various episodes. In high school, I was a shapeshifter. I was in marching band, jazz band, pep band, and symphonic band. I ran cross country and track. I was in a classic rock cover band and a metal band.

I did Science Olympiad and hung out with the gifted kids even after my grades kept me from officially joining. I messed around with the school paper and yearbook.

If you were a nerd, geek, spaz, or any other marginalized classification of high school clique, I was basically in and around and adept enough to stay on good terms among them all, and even occasionally with the jocks and the popular kids.

But outside of the scholastic setting? My best friends were the nerds, geeks, and metal heads – generally speaking, the outcasts.

Now, 18 years removed from my high school graduation and years after my geek and nerd brethren got their pop culture due, the metal heads are finally getting some due respect!

Earlier this year Metal Lords was a wonderful insight into what we went through. Followed by Eddie Munson’s debut in Stranger Things 4 parts 1 and 2, metal heads are finally getting their redemption! 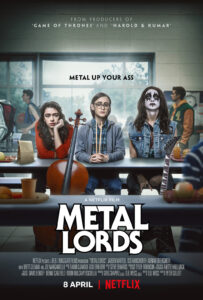 Two doses of metal head youth surely doesn’t make it a true trend in any sense. I’m not sure it has moved the needle in most cases of data insights or analytics, but it is still a monumental achievement for metal heads who have seen very little of themselves in a positive light in popular culture.

And what’s more, Stranger Things, perhaps more than Metal Lords, encompasses more of the metal head experience of youth. In truth, metal heads are often overlapping with nerd and geek cliques. Because they literally wear one of their passions on their shirts, often like Eddie, in the case of a band tee, they are often, at times, disassociated from their other nerd and geek brethren.

Stranger Things got that right. Now that two fairly large, positive portrayals of metal heads have been unleashed upon the world, it’s given me pause to think. Are the former metal heads finally getting their chance in writers’ rooms and pitch meetings?

It has been almost 15 years since Big Bang Theory and similar shows and movies have hastened the rise of the nerd and geek to a new level. Is now the time for metal heads? Even stranger to say, is Eddie our Sheldon?

Maybe it’s too much to think what happened to nerds and geeks will happen with metal heads.

Remember my shapeshifting high school experience? Well, my best friend who I’ve held onto since that time is still a metal head, or at least he was. Now he’s got a good job, and when we hang out, he’s basically traded in his metal tees for polo shirts or plain T-shirts. But do you want to know something? He’s happy to see his youth on the screen, big or small. He’s happy to be able to remember what it was like without being accused of devil worship. 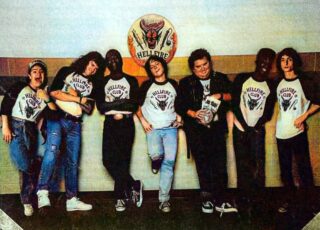 Some of that still exists in Stranger Things and Metal Lords, but there is a mostly positive redemption to the old “Satanic Panic,” which is much more than ever was given before. This is coming from the guy whose own parents went to a school board meeting in the mid-90s about the “demonic” connections between devil worship and Magic: The Gathering.

Ostracism and claiming marginalized group’s fun, such as Dungeons & Dragons, as devil worship, is not just something for the 70’s and 80’s. It endured at least into the 90’s as well.

Perhaps your hair isn’t as long as it used to be, but I’m sure that somewhere in the back of your closet you still have that band tee, be it Def Leppard, Aerosmith or Madonna. Maybe it’s something much heavier like the big four – Metallica, Megadeath, Slayer, or Anthrax.

Either way, two releases this year have given you a little more leeway to wear that out in public with a few less stares. After all, it’s not every day Metallica stitches a TikTok with the most metal science fiction/horror concert of the century.

I’ll leave you with this small connection. Stranger Things’ Eddie Munson shares the name Eddie with Iron Maiden’s mascot. This was clearly on purpose, since Munson defends the band as he declares, “This is music!” while brandishing what I’m pretty sure is 1983’s “Piece of Mind” cassette. And if you didn’t know that, you probably weren’t a metal head, at least not one that was born before 1990.

Your moods signal a period of change.
Courtesy is the password to safety.
Look forward to great fortune and a new lease on life!
More Fortunes >