“Hey, yeah. The 1960’s? Happy times, heavy times.” Those are the first eight words of Ralph Bakshi’s “Fritz the Cat.”

This isn’t your average animated flick. The movie was a trailblazer as it was the first animated film to receive an X rating from the MPAA. And it received such a rating in 1972, long before animated sex from the Far East would invade American soil.

After a career at Terrytoons, Bakshi created Bakshi Productions and was looking to create his first feature film. He had developed “Heavy Traffic,” but studio executives were not willing to fund his debut with unknown characters. After stumbling across Robert Crumb’s “Fritz the Cat” in a bookstore, he pitched that character to the executives and eventually Warner Bros. bought it. 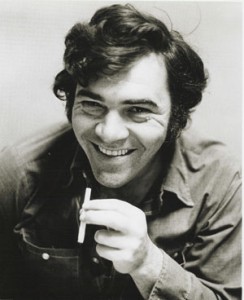 After the those first eight words about the 60’s, the intro to the movie is over a conversation between constructions workers on lunch, high above New York City, about “the bourgeois, American-type society family.”

This does well to transition us to the entrance of Fritz himself, complete with his own theme song that starts with the lines:

Hey, you fucking intellectuals
You think you’re so where it’s at

At the park, Fritz and his band of friends are trying to score some chicks, when they get passed up. Does this deter our Cat? Nope, he listens to the three girls flirting with a homosexual spade and then gets into character. 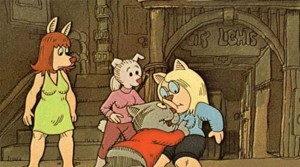 Fritz the Cat and the Girls

I’ve had riches and fame and adventure. Stood face to face with danger and death countless times. I’ve tasted life to the fullest… and still my soul cries out… in this hungry tortured, wrecked quest, ‘More!’” 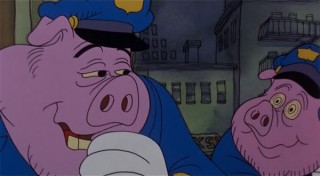 The cops in this movie are pigs. This isn’t subtle nor should it be. After all, the African Americans in the movie are all crows. Bakshi, really managed to get a lot out of the two pigs, having them chase Fritz into a synagogue, where we learn that one of the pigs is Jewish. Seriously, a Jewish pig!

Anyway, Fritz manages to escape during the celebratory dancing when it comes over the radio that America will send more arms to Israel. Ending the scene as Fritz runs on is the Jewish pig berating his partner for dancing in the celebration because he’s not Jewish.

Now, we move to NYU, where Fritz sees his roommates and attempts to talk to them, while they are studying. His response to their non-response starts with;

“You’d think the goddamn exams… was the be-all and end-all of existence… cosmic life force or something.”

And ends with him burning all of his notes and books.

Fritz the Cat hangs out with the Crows

This leads to a great transition into Harlem of a crow dancing as the noted section of Manhattan moves from background to foreground.

It’s a simple transition, but the significance of how long the transition takes, really emphasizes how far out of his element Fritz is going as he enters the Crow Bar.

In the bar, Fritz meets Duke at the pool table. After a conversation about the race problem, Duke hits the nail on the head:

From there, after Duke saves him from death-by-pissed off bartender, they steal a car. The chase that follows is one of the best animated car chases I’ve ever seen. I mean, it’s like a drunk person playing “Grand Theft Auto,” serving all over the road and escaping without a single collision. And who’s chasing them? The cops from earlier in the movie, of course. 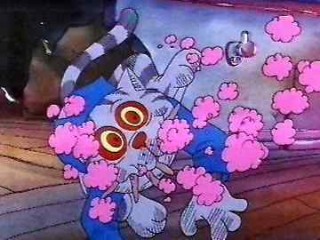 Pot is the drug of choice in this movie. Duke takes Fritz to a club where the quote is, “Let’s get that cat going on pot!” At one point he’s smoking at least seven joints. When anyone smokes pot in this movie, their eyes change color. It’s a subtle change that is consistent throughout.

One of the things I really enjoy about Bakshi’s movies is his attention to detail and consistency. It’s not something that is common throughout older animated features or shorts.

At this point, while making it with a busty crow, he stops and says, “Suddenly it’s all very clear!” Out into the street atop the stolen car, Fritz is telling the crows to revolt when our beloved pigs show up again. This doesn’t end well for the cops, Duke, or Fritz. 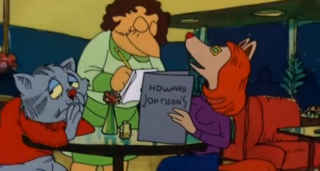 Winston and Frtiz and Howard Johnson

Where do you go from here? West, of course! At this point, Winston Schwartz gets her own song as they zoom along the open road.

Is this movie dated? Not that much, except where do they stop for a bite to eat? Howard Johnson’s. I know there are still hotels of that name, but I haven’t personally seen a restaurant of that name in over two decades! It’s the reason I find Winston’s after meal line so hilarious: “That was a really fine steak. You can always depend upon Howard Johnson’s.”

What would a trip out West in a movie be without the car breaking down at some point? It’s hard to tell, because they always do. Fritz is told by Winston that he “can’t cope with a real woman” and he is sent off to get gas. This is, of course, after he tries to fix the car, a VW Bug, by looking in the front for the engine. 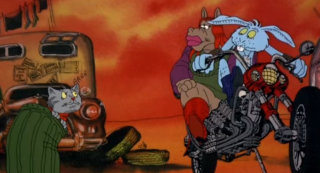 Fritz, in his journey through the desert, meets Blue, a junkie Nazi rabbit biker and joins him at a meeting of the revolution. Their shared meeting dialogue is priceless.

Blue: “Get out of the garbage cans”
Fritz: “You talking to me, Jack?”
Blue: “What the hell you doing there, anyway?”
Fritz: “Man, here we are on the brink of the apocalypse… the eve of destruction, so to speak… and I can’t think of anything to do.”
Blue: “Offhand, son, I’d say you have got a problem. But at least you’re honest. The revolution could use a man like you.”

He isn’t indoctrinated, but his spouting about the apocalypse brings him into their plan to blow up a power plant. At their meeting, Blue and his gang beat the hell out of Blue’s girlfriend and Fritz tries to stop it.

It’s the beginning of the end, as Fritz shows he has a conscious.

After helping to plant the dynamite in the power plant, Fritz backs out. Is it too late? Of course it is. The fuse has be lit and he blows up.

Is he dead? No, this is a cartoon. 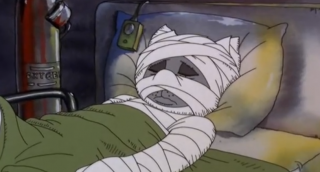 Fritz laid up in the Hospital

In the next scene, Fritz is laid up in a Hollywood hospital where he is visited by the same three girls from the beginning of the movie, including Winston, and we’re reintroduced to his monologue as well.

I don’t know if that line works in the real world, but it works for Fritz. The backgrounds, the music, the art, the voices, the animation – it’s all trademark Bakshi. This was his first feature, and the style and realism he adds to his films are all set up from the get-go.

Is this film still relevant? Certainly. Regardless of the time period it takes place in, we are all poets looking for a muse and the meaning of life. We are all looking for those things and, so far as I can tell, this movie states a case for the continued search for those things better than any other film of its time or any time.

Seriously, it’s the adventure of searching for those things that keeps us going.

Read the Secret File of technical information and quotes from Fritz the Cat.

Let’s finish this up now, someone is waiting for you on that.
Your moods signal a period of change.
You are interested in higher education, whether material or spiritual.
More Fortunes >