About “Old School” Magic the Gathering

Sometimes, in geekdom, I think there remains a great ignorance to what came before. Other times, there is more emphasis on the past to the detriment of the present or future. But sometimes those attitudes can exist in harmony.

For me, it’s the latter, a focus on the past, in regards to Magic: the Gathering, which I refer to as “Old School Magic.” 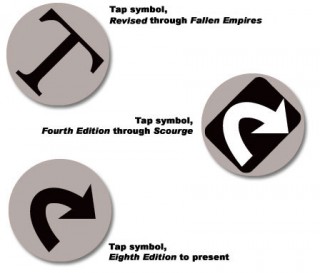 Evolution of the Tap Symbol of Magic the Gathering

I was witness to the evolution of the “tap” symbol from the word “TAP” to a slanted “T” to the white arrow in an angled rectangle and circle to the current black arrow in the grey circle. I have seen the change in rules and languages, from when a Serra Angel didn’t tap to attack to “Vigilance” and the replacement of “unaffected by summoning sickness” and “can attack the turn it comes into play” to “haste”.  I have been privy to the death of “banding”, the attempted abilities of “flanking” and “rampage,” and the rise of “cycling,” “echo.” I have seen the abolition of the word “bury” and the discontinuation of the “interrupt” as a card type.

The truth is, the game has changed. Arguably, there was a shift in the game in 1999 when Wizards of the Coast was purchased by Hasbro, but my life took me away from the game around that time as well. Before I talk about the end and eventual renaissance, however, I must first speak about the beginning. 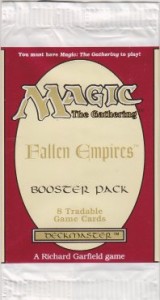 First off,  I didn’t always view it as “Old School Magic.” When I started out it was just “Magic.” I learned to play back in 1995, just after the November release of Fallen Empires and before the release of Fourth Edition. Back then, I was just playing with friends, making up house rules to make the games more fun, as we didn’t really have collections and had no idea about deck building, strategy or mana ratios.

Then I discovered the newly opened gaming store in my town. And by newly opened, I mean that I was the first customer to walk in the door. This store changed everything. I had a place to hang out with like minded fanatics. It was a gaming den that included Magic, of course, but also dealt heavily in the realms of “Quake,” “Warcraft II: Tides of Darkness,” Dungeons & Dragons, and an attempt at many other CCGs that never really took hold, like Star Wars, Monty Python, X-Files and Middle Earth.

I remember my first tournament. I got destroyed in the first few rounds of round robin, but it didn’t matter. The level of competition had been raised and I was up for the challenge. Eventually, I started to work at the store. Even though I got paid in store credit more than cash, I was happy with the arrangement. I started to build a collection, gathering sets as well as amassing a library of decks.

The store started to host Arena, Magic’s precursor to Friday Night Magic, where I ended up becoming a DCI Judge for a time. The store also had a team of players that would travel to Pro Tour Qualifiers, which I was a part of. These experiences changed the way I looked at Magic. I started to build decks that were “out there.” Sure, I fell into a few Counter/Burn and Elf decks, but always with my own spin on them. 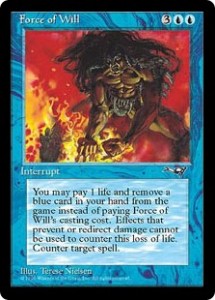 Force of Will from Alliances

I remember the release of Ice Age, Alliances and Mirage so vividly. We didn’t all run out and buy boxes, but we did mull over the combo and deck possibilities from the card lists. By the time the Urza’s block came out, I had my own playing style. Some deck themes came and went, but there were a few that stuck to me. Cocoa Pebbles, Squatageddon, Elves, Goblins and a very nice Propaganda deck.

Eventually, I took a semester abroad in high school and went away to college. In college, I played with friends, but completely got out of the competitive circuit and started to rely on my decks as they were. Shortly after college graduation, a friend of mine who I had been trying to get to play for years finally succumbed and started playing around the Kawigama block.

Thanks to him, I put a few newer cards in my deck library to enhance my already impressive collection, but for the most part, I’ve let them stay as is.

A few years ago I started to get into deckbuilding. I had always enjoyed the concept of putting together decks, so I just took out my massive collection and started building. And with the help of some of the newer sets, I was able to build out some tribal decks that would have been useless when I was a hardcore player, like an Imp deck and a Dwarf deck.

But I still focus my deckbuilding on “Old School” Magic – what I played when I was a hardcore gamer – so that would be from Revised through Prophecy, although anything after the Urza’s Block wasn’t really more than me picking up a card here or there. 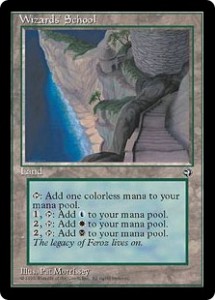 As I’ve gotten back into the game, I’ve fallen back on my roots. I have learned by playing with friends who are current about the new rules, language and mechanics of the game, but my sweet spot is still the card game I cut my teeth on. I used to know all of the cards by heart, and I can still remember most of them.

As a result, I am starting a series of blogs called, “Old School” Magic to go through the sets and cards that I enjoyed and thoroughly played (or overplayed, if it’s possible to do so). I will be starting with Revised and moving on to Fallen Empires and Fourth Edition, all the way up to the Urza’s block. I plan to shed some light on what was, because even though cards have been tweaked and the game has changed, I still really love the way it was. I don’t need all these new mechanics, I need a good mana ratio and a few deck concepts.

I think that the game has evolved and, to an extent, it’s passed me by. Still, it’s rewarding to thump newer players with my old school style. Why teach an old hellhound new skills?

The new game seems to rely too much on mechanics and is not focused enough on the cards and knowledge of the cards. It’s time to relive the days of the “Old School” of hard knocks.

Priest of Titania from Urza’s Saga 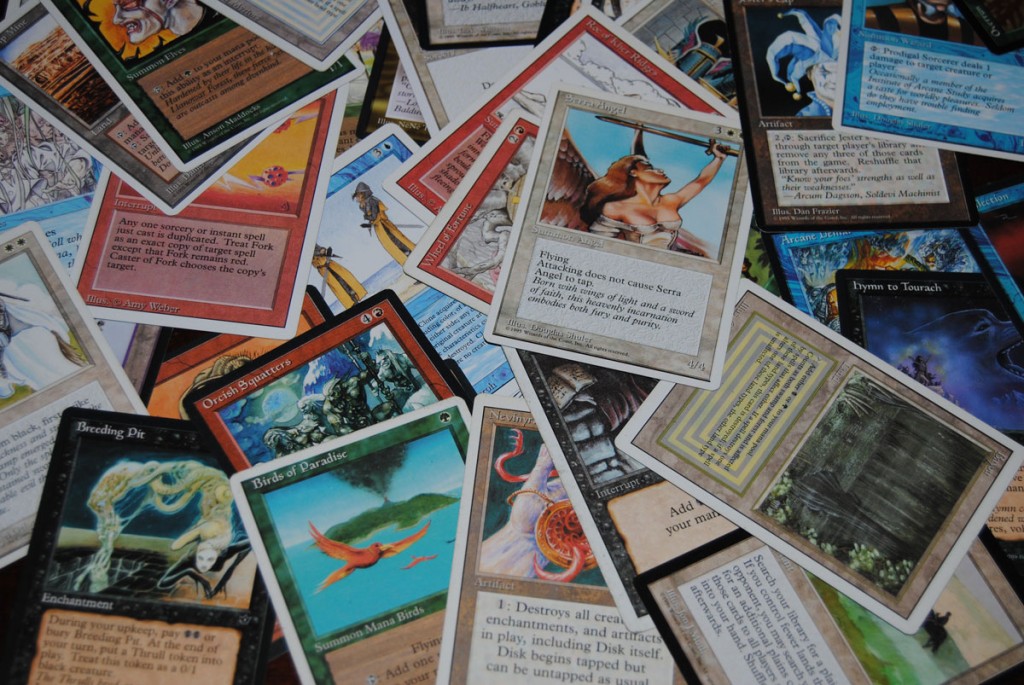 Whoever wants to reach a distant goal must take small steps.
Nothing in the world can take the place of persistence.
Things are turning for the bright side.
More Fortunes >