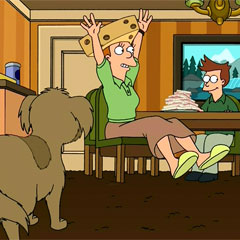 As Russell Wilson tried in vain to try and spike the ball for one last shot at the end zone, I couldn’t help but think of the wonderful animated mother who gave birth to Phillip J. Fry and who’s husband named him after a tool (a phillips screwdriver).

Fry’s mother, who was never named in the series, was a huge Wisconsin Badgers fan. In the episode “The Luck of the Fryrish” Fry’s mother recalls that the day Fry disappeared Wisconsin won the Rose Bowl 17-9, which is true, Wisconsin did beat Standford 17-9 in the 2000 Rose Bowl. The second reference to that game comes from “Jurassic Bark” where she celebrates a Wisconsin touchdown and you can see the score of the game on the television in a shot where Seymour, Fry’s dog, tries to lead the family to the Cryogenic lab, where Fry is.

First, you’re thinking that none of this proves she’s a huge Badger fan. Well, it really does, as she’s not really in the series and during two very poignant flashbacks she references or is watching the Rose Bowl. Also, in the latter episode, she’s wearing a Cheesehead. A staple of the Wisconsin fan.

Mrs. Fry, where ever you are out there in animated 2012, I’m sorry you had to watch your beloved Badgers fall in the 2012 Rose Bowl, but I thank you for sharing your son with the 30th Century!

Good clothes open many doors. Go Shopping.
Courtesy is the password to safety.
Today it’s okay to make a few choices by going with your instincts.
More Fortunes >