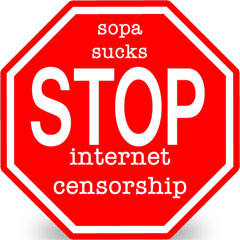 Today is January 18th, 2012. There has been a lot of speculation over the last few weeks as to who would participate in this blackout. Well, the day is here. Big boys Google, Wikipedia, Reddit, WordPress and Mozilla are all throwing their collective weight around. So is The Oatmeal, I haz Cheezburger, oreilly and others.

I applaud them for standing up for something. Although they had very little choice. SOPA and PIPA could very well change and possibly destroy the way some websites and web companies do business.

In all, greenpeace.org and wikipedia.org had the two best looking blackouts. While, I’ll also give Google an award for simplist and most straight forward, Wired.com’s redacted website was simply inspiring (if that didn’t make you want to sign the petition, check yourself).

These companies are standing up for what they believe and they’re also standing up to protect themselves against future issues that could be caused like lawsuits from the liabilities of their users.

These are major companies in fear of being brought down by you or me. That’s one reason they’re doing this. And you should join them, if you still want the freedom to create your own content without the overbearing creation of a Big Brother to monitor your online movement and content.

Look forward to great fortune and a new lease on life!
Things are turning for the bright side.
Let’s finish this up now, someone is waiting for you on that.
More Fortunes >