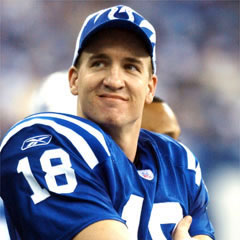 As Superbowl XLVI draws near, I stop to ponder who will be the NFL MVP. There are a select few in the race to begin with: Tom Brady, Drew Brees, Eli Manning and Aaron Rodgers. But I’ll submit to you that Peyton Manning should be in the conversation as well. The MVP award is an award given to the most valuable player in the league. Who was that this year? Let’s take a look shall we…

Tom Brady, the reigning MVP threw for 5,235 yards, second most in history to Brees who along with Brady shattered Dan Marino’s 27 year old record. He led the Patriots to a 13-3 record and had 39 TD’s. He’s got two amazing Tight Ends, who are probably not putting up records or even double digit touchdown totals without him. 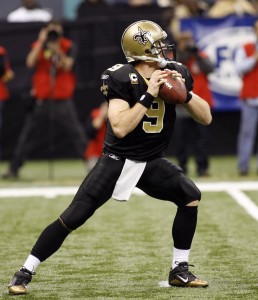 The aforementioned Drew Brees, was the one who first shattered Marino’s record with 5,476 passing yards. He led the league in touchdowns with 46 and led the Saints to a 13-3 record. He also broke his own record with a completion percentage of 71.2%. This year could have been one of the greatest seasons ever by a QB in history.

Eli Manning is the New York Giants. He threw for a career high 4,105 passing yards and 25 touchdowns and lead the Giants to six fourth-quarter comebacks. For the record that makes him clutch. If the Giants D-Line had played all season like the have in the playoffs, he’d have led his team to a better record than 9-7, but still without him, I don’t think they would have hit the .500 mark this season. 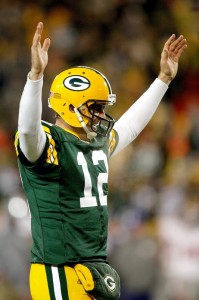 Aaron Rodgers just led his team to a 15-1 record and made the ’72 Dolphins hold that champagne on ice through most of the season. He had 45 touchdowns, through for 4,643 yards and was second in the league in completion percentage to Brees with his 68.3% mark. As with Eli Manning the Packers were good, but without Rodgers, they wouldn’t have had 15 wins, maybe just 10.

Those are the quarterbacks in the league that played this season that are in the mix, but there is another…

Peyton Manning. How can we deny how valuable he is to the Colts? Here are the facts, according to cbssportsline.com‘s preseason predictions the Colts were to win their division at 11-5. ESPN’s preseason power rankings had the Colts at #8. A few USA Today writers had the Colts winning the AFC South as did some NFL.com writers. And for good measure thebestfootballblog.com also had them winning the South. And yet, the Colts went 2-14, with a miraculous 2-game win streak in weeks 15 and 16. Moreover, Vegas has added some more metrics for me to use.

According to this ESPN article, “Peyton Manning Alters XLVII future odds” the Colts with Manning have a 25:1 shot against the 40:1 shot they give the Colts with possible first round pick Andrew Luck. The Redskins with Peyton would have their chances from 100:1 to 50:1, as would the Broncos and the Jets with him would go from a solid 20:1 to a very good 8:1.

So who do I think gets it? We’ll I don’t think anyone will be sharing the award this year, so I’ll wager that it will actually go to Brees, which is deserving. But Eli was more valuable to the Giants and moreover, Peyton is just extremely valuable to the League itself. Not just his team. So Peyton should get it, but he won’t. Case Closed.