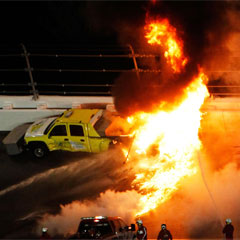 Sunday, Sunday, Sunday! It’s Daytona. No wait, Monday, Monday, Monday it’s Daytona. After a very long wait the NASCAR season finally got it’s first “Gentleman and Danica, start your engines!” under the lights Monday night at Daytona International Raceway. It was wrecks, fire and delays. And it wasn’t a Michael Bay remake of Days of Thunder. It was the actual race.

Two laps into the race, maybe less depending on where you where in the field, 5-time Champ Jimmy Johnson was in a wreck that collected media darling Danica Patrick among others. That’s with 198 laps to go, out goes one of the favorites. The race was not uneventful after that point, small wrecks and mechanical issues slayed the field of hopefuls down lap after lap and then with 40 laps to go under caution things got weird. 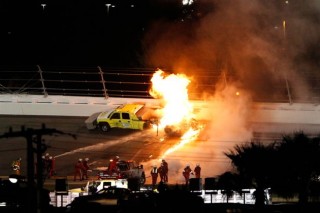 Under a caution, Juan Pablo Montoya’s car broke, he lost control and hit a a jet dryer that was clearing the track of debris. An inferno ensued. Everyone was safe but the race was delayed another two hours under a red flag to put out the fire and return the track to race ready condition. During the delay, Brad Keselowski tweeted about the delay and earned himself 160,000 twitter followers. I know twitter keeps track of that stuff, but I would suspect that’s some kind of a record for gaining followers for a single tweet.

That tweet has started a conversation about allowances for drivers to have smart phones in the cars with them. Although Keselowski has a good reason to have his with him. In 2007 he crashed and was airlifted to a hospital, he didn’t have his cellphone with him and couldn’t contact his mother. We know he wasn’t tweeting during the race, because I’m sure that as talented as these guys are tweeting and driving that fast would make for a very yellow flag laden race. 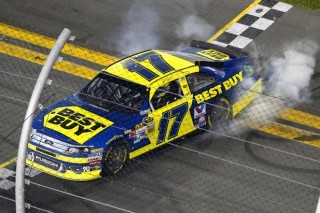 Once the delay was over the race was exciting to the finish with another big crash at 12 laps to go. Matt Kenseth ended up winning the race, holding off a charging Dale Earnhardt, Jr, who’s still trying to break his winless streak. But months, years, and many decades in the future, very few will remember this as the race that Matt Kenseth won, they will remember the crashed, maybe all of the Danica hypa and most of all and Jet Dryer explosion.

Things are turning for the bright side.
Even a broken clock is right two times a day.
The path of life shall lead upwards for you.
More Fortunes >