Every once in a while I have to beat NFL Street 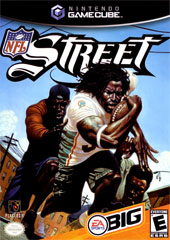 NFL Street, the original on GameCube is a game that I thoroughly enjoy. Even once in a while I get the urge to beat it and recently I got the urge. I pretty much play it the same way every time. I go through the challenges and build up my custom team, complete with naming my characters.

I’m amazed by some games like this. I don’t go back and replay Madden games. I mean, I’ll pick them up and play a game every once in a while before football season starts, but aside from that one game it’s just in my collection.

The thing that struck me this time was how old the game is. Michael Vick is the QB for the Falcons and Brett Favre is throwing it deep for the Packers. It adds a little nostalgia to the game as picking up and old Madden would.

And the next time I put that game in my GameCube, it’ll be the only way I’ll see Peyton Manning playing for the Colts. Nostalgia. Fun. Replayability. Those are some key words in my review of this game. And I’ll leave you with links to what IGN and Gamespot reviewed that game at.

Today it’s okay to make a few choices by going with your instincts.
Good clothes open many doors. Go Shopping.
Even the greatest of whales is helpless in the middle of a desert.
More Fortunes >