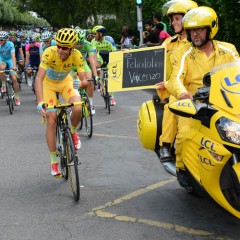 The 2014 Tour de France ran from July 5th to July 27th. This 101st edition of the Tour was made up of 21 stages and covered 3,664 km, containing nine flat stages, five hill stages, six mountain stages with five mountaintop finishes, one time trial and two rest days.

The Tour started in England lost a few big names along the way to Paris. In their absence the race was still competitive, for the Sprinter’s Green and King of the Mountain’s Polka Dot Jerseys. The Yellow Jersey and General Classification was decided early quite early on, with Vincenzo Nibali’s performance in Stage 2 and the withdrawal of both Christopher Froome and Alberto Contador.

With that being said, here are my Top 10 Moments from the 2014 Tour de France: 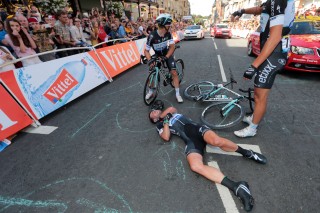 Both huge names in the Tour, looking for glory, Mark Cavendish and Christopher Froome, had to abandon the Tour due to injury.

Cavendish, a favorite in the Green Jersey competition, only 300 meter from a chance at a Stage 1 victory in England, went down hard in a crash and was forced to abandon. While during Stage 5, the race’s second day in France, rain and the cobblestones spelled disaster for, Yellow Jersey favorite and defending champion, Chris Froome after being involved in two crashes.

2. The Tour loses another Big Name in Contador

At the bottom of a descent off the Petit Ballon, just the second of the many climbs making up Stage 10, two-time champion Alberto Contador’s bike seemed to let him down, as reports of a snapped frame as the apparent cause for his crash and subsequent abandonment of the Tour, joining Cavendish and Froome. 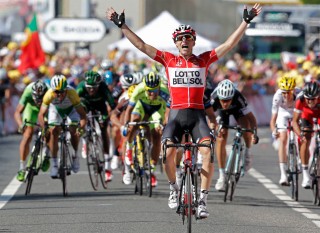 3. The French get their First Stage Victory of the Tour

During a wet Stage 8, Blel Kadri, survived the breakup of the breakaway to finish the final 22.5km of the stage by himself. Claim the first Stage victory of this year’s Tour for the host country, France. His solo ride for the final kilometers was superb.

Tony Gallopin gave France its second Stage victory of the Tour on Stage 11, but it was how he did it that was miraculous. Having been one of four riders in a break, he split from the others with 2.5 km to go and finished just a few seconds ahead of the peleton. Such attacks, usually get swallowed up by the peleton, but Gallipan had enough to edge the rushing peleton, making for a very exciting finish. 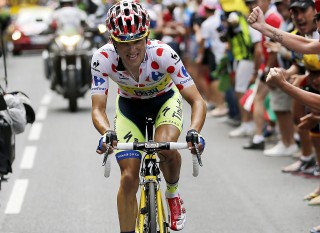 In 2014 Rafal Majka was King of the Mountains

5. Majka makes Moves in the Mountains for two Stage Victories and Polka Dots

Rafal Majka makes a great move, with 9km to go, to claim Stage 14 on the final ascent to Risoul. Then, three days later, he captured his second Stage of the Tour on Stage 17, cementing his place as the 2014 Polka Dot Jersey winner.

6. Only One Time Trial in the Race, but a Memorable One for Stage 20

It is not new for Tony Martin to ride great in time trials, but he destroyed the field, with the second place on the Stage falling 1 minute and 39 seconds behind his blazing time.

The real race of the day was for the bottom two podium spots. Although, battling not just to be on the podium, but their position on the podium, as well, some ill timed punctures were thrown in, although neither had any real impact on the final standings. 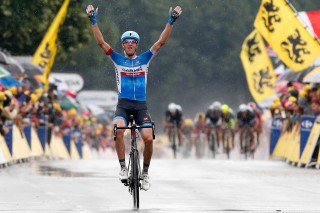 On Stage 19 Ramunas Navardauskas stole the show from the Sprinters

7. Michael Rogers finally gets his First Stage Victory in the Tour de France

Rogers has won races and stages in his career, but before Stage 16 of this year’s Tour he had been in the Tour de France 10 times and completed 205 stages without a victory.

That drought finally came to an end for the Australian rider in 2014.

In the rain of Stage 19, Ramunas Navardauskas took a gamble by attacking the field and going it alone for the final 10 km. With the wet conditions and a crash in the peleton, his gamble paid off, finishing just 7 seconds in front of a charging peleton full of sprinters. 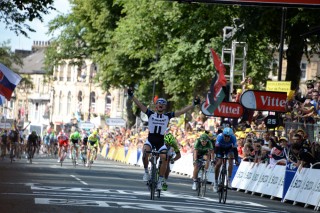 9. Germany tops all other Countries with the Most Stage Victories in this year’s Tour

Apparently, it wasn’t enough for Germany to win the World Cup, because the German riders in  this year’s Tour showed up with a chip on their shoulders winning seven Stages in this year’s Tour.

Marcel Kittel won four Stages; 1, 3, 4 and the prestigious Stage 21, Tony Martin won two Stages; 9 & 20 and Andre Greipel won Stage 6. Were they inspired by Germany’s World Cup run? Who knows. The only takeaway from this is that German athletes are in top form, both on the pitch and on the road. 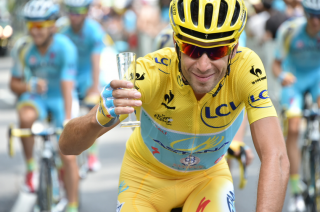 During Stage 21 Vincenzo Nibali celebrates his 2014 Tour de France Victory with the Traditional glass of Champagne.png

Almost from the start of the race, the 2014 Tour de France was about Vincenzo Nibali.

An undulating Stage 2 with nine mountains, albeit small ones, paved the way for his first Stage victory and a statement to the rest of the field.

Nibali again showed his strength by taking three more Stage victories in Stages 10, 13 and 18. By the Stage 20 time trial, his 7 minute and 10 second lead made his victory eminent.

This year, Vincenzo Nibali took the tour from the start and held off all challengers to the finish, increasing his lead as the Tour rode on.

That’s it, full of crashes and withdrawals, sprints and mountains, drama and luck. Everything that, as fans, we expect from the spectacle and sport of the Tour de France.

Fame and fortune are coming your way.
Nothing in the world can take the place of persistence.
Whoever wants to reach a distant goal must take small steps.
More Fortunes >