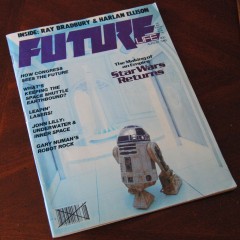 In the August 1980 issue of Future Life, published just three months after the release of The Empire Strikes Back, a quote appears in the science and science fiction magazine that references Empire as the “‘second act’ of a proposed nine movie Star Wars series.”

This cannot be debated as I physically have a copy of the magazine.

The article references nine movies a second time saying “with two films down and seven more projected.” Here were are, in 2015, the year that will see the seventh film and the start of the third Star Wars trilogy to hit theaters. But it all leaves me with a lot of “what if” questions.

First off, the original trilogy was Star Wars, The Empire Strikes Back and Return of the Jedi. Those movies were released in 1977, 1980, and 1983, respectively, and they each did over $475 million in box office revenue. 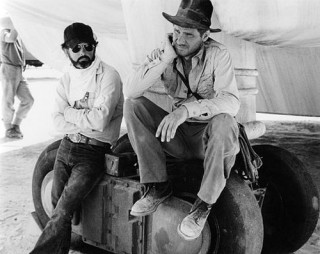 But then it all came to a halt.

We know that George Lucas then continued the Indiana Jones series, started in 1981 with Raiders of the Lost Ark, and continuing with Indiana Jones and the Temple of Doom in 1984 and Indiana Jones and the Last Crusade in 1989, as well as being a writer for 1988’s Willow, and being involved in a number of other projects. But why did it take until 1999 to return to a galaxy far far away?

I’m sure Lucas could have been burned out by writing all six films and by directing four of them, but aside from writing four films during that 16-year span, he only served as Executive Producer or Producer on the other nine projects. It’s hard to believe he couldn’t have sold the next Star Wars trilogy and at least put it out in the 90’s. 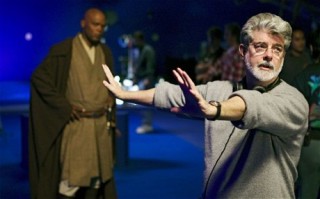 Lucas & Sam Jackson on the set of The Phantom Menace

Now, many believe that the Prequel trilogy doesn’t hold up to the Original one, but it does what it is supposed to do. It tells the story of the rise and fall of Anakin Skywalker. Fans hate on Jar Jar Binks and the animation of the prequels in the same way that they love the puppets in the original trilogy, but this isn’t the time to debate those items.

If Lucas hadn’t taken 16 years off, we might already have all nine of the project films in our Blu Ray libraries right now! We might be streaming them on Netflix, Hulu, and Amazon Prime.

So the question I’m building to is this, are we going to end up with the nine films Lucas had envisioned when the quote about “a proposed nine movie Star Wars series” was made 25 years ago? 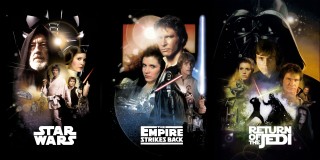 You can talk about the changes made in various versions, but not one of those changes impacts the core story that we are being told.

So much drama has occurred with the Prequel trilogy and the editing of the Original movies and the fan outrage that I can’t help but think those fan reactions will have a part in the script that Lucas wrote for Star Wars Episode VII: The Force Awakens. I’d like to assume it has no affect on him, but for as great a director and writer he is, George Lucas is only human. How could all of that not affect him?

But I give the man credit and I hold out hope. I give Lucas credit for creating something as lasting and sentimental as Star Wars that we do care about every frame of the movie. We also pack theaters to see what he’s built. 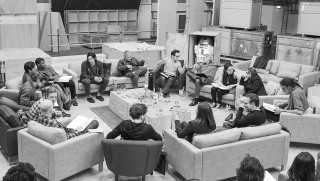 The cast of Star Wars: Episode VII The Force Awakens

Honestly, no matter what you thought of The Phantom Menace, you still went to see Attack of the Clones and Revenge of the Sith. I know this because Star Wars movie releases are as much a cultural event as they are an invitation back to a galaxy far, far away.

The hope I have is that Uncle George, as Peter Mayhew calls him, will give us in this next Star Wars installation the story that he had in mind way back in 1980 when he was talking about a nine film series. I’m sure his writing style has changed, but I hope that the plot is what he had envisioned back then. It would be wonderful to know that regardless of fan reactions, Lucas would stay true to himself and his story and deliver us the plot he intended for the totality of the nine film series. 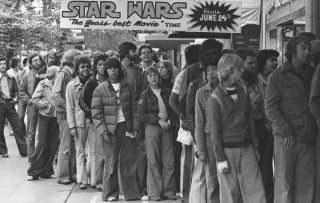 For now, it’s a waiting and a guessing game, as I do not actively seek out spoilers, but I’m still anticipating a great cinematic experience. If nothing else, that has been one of the George Lucas trademarks throughout his illustrious and highly decorated career.

I don’t have access to George Lucas, but when he starts to do press, I would be extremely interested if someone would ask him if this third trilogy is taking the plot he envisioned from the beginning. That would be interesting to know, but the answer isn’t what really matters. We’re going back to a galaxy far, far away, and that’s just what we’ve wanted all along!

The Making of an Empire

With two films down and seven more projected

To let another into your heart, first let yourself in.
You are interested in higher education, whether material or spiritual.
Your moods signal a period of change.
More Fortunes >