What you should listen to: The Nerdist Podcast (The Big Bang of the Nerdist Industries Juggernaut) 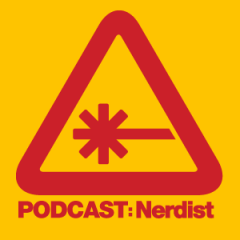 Chris Hardwick, along with Matt Mira and Jonah Ray, usually accompanied by a celebrity, commonly of nerd or comedic fame, have conversations and record them for the entertainment of many, many fans, across many, many fandoms.

Who are the players?

Chris Hardwick is the tour de force behind The Nerdist (and not just the podcast). You may know him from his past lives as a DJ on KROQ, the little known Guys Like Us sitcom (cancelled after 12 episodes aired), MTV’s Singled Out, PBS’s Wired Science, G4’s Web Soup, or in his many current incarnations as host of AMC’s Talking Dead and Comedy Central’s @Midnight, or possibly his hundreds of guest spots or voice over work on many more shows and movies. 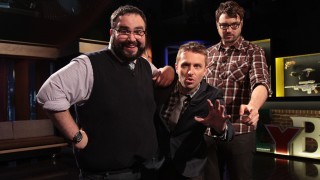 Matt Mira is the Prince of Podcasting. Seriously, since his Apple Genius turned Prince of Podcasting and comedy writer fairytale came true, he has appeared on, or featured in millions* of podcasts. He currently hosts FEaB with Scott Mosier, James Bonding with Matt Gourley, in addition to his work on The Nerdist Podcast. He’s also guested on millions** of others. You may also remember him from G4’s now deceased Attack of the Show and he writes and has been on @Midnight.

Rounding out the trio is Jonah Ray a comedian, comedy writer, and actor, who has appeared in many many things and currently hosts his own solo podcast Jonah Raydio and has a show on Comedy Central that follows @Midnight (which he has been on) called The Meltdown with Jonah and Kumail, with Kumail Nanjiani. 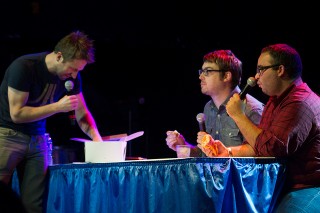 The podcast is less interview and more coffee shop conversation with their guests. It’s not always a guest along with Chris, Matt and Jonah, commonly it is a guest and some combination of them, except for those episodes where there is no guest, which are the episodes called, “Hostful.” The show is recorded in various locations, sometimes live and sometimes even in the guest’s home.

Each of the three hosts carry with them, their own themes. Chris talks about his own path to sobriety with some guests, while Matt is the science and music aficionado and Jonah, as a great comedian, always seems on point by having that one line to create laughter or complete a joke.

Also of import, they end each show with “Enjoy your burrito,” which means to enjoy the moment, the right here and right now. Sometimes it is said by the guest, sometimes by Chris, but the meaning is never lost, regardless of the delivery.

Why you should  listen?

Why not? Ok, how about entertainment? Or Education? Life lessons? 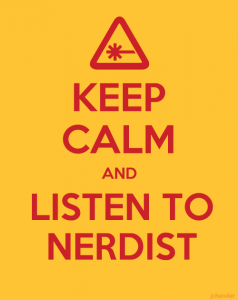 Keep Calm and Listen to Nerdist

For entertainment purposes, these guys are top notch. They are all insightful and funny, witty and sometimes punny. And that all goes whether they have a guest or not.

As for education, they are all versed in so many diverse and varied fandoms and forms of comedy and entertainment, you really get more than just entertainment out of the conversations they have with their guests and each other. Now, a big part of that could be because of the conversation style the podcast has, even when guests are front and center.

More than just learning the intricacies of fandoms and behind the scenes information from guests and the hosts themselves, there are very important life lessons that can be carried away from any given episode. As an example, when Chris lost his father, he spoke openly about the grieving process with his fellow hosts and the guests and he did so in a way that every listener can understand what he was going through and learn a life lesson about the process of grief.

Furthermore, if you miss Attack of the Show, enjoy @Midnight or The Meltdown with Jonah and Kumail or Talking Dead, you should give it a try. If you listen to FEaB or enjoy SModcast or WTF with Marc Maron, you should listen. If you identify yourself as a geek or a nerd, this may be the podcast you’re looking for. 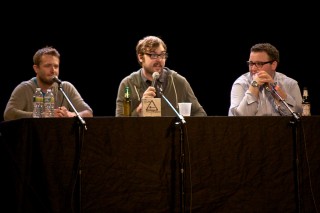 Anytime and I mean that. I listen at work, which on occasion has led me to stay late at work, because I was busy working while listening and completely lost track of time, only to look at the clock and realize that I was the only one left in the office. But you can listen at the gym, on the road, while playing a video game.

If you do enjoy The Nerdist Podcast, you’ll no doubt enjoy @Midnight and The Nerdist Youtube Channel. But you should also give The Meltdown with Jonah and Kumail or Talking Dead a try. For more Matt (and who doesn’t want more Mira), listen to FEab and James Bonding. 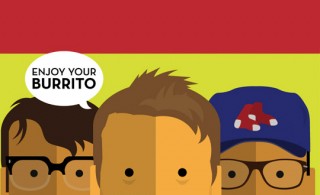 “Enjoy Your Burrito” the official Nerdist Podcast sign off

Along with SModcast and it’s massive network of podcasts, Nerdist and it’s also formidable network of podcasts, there are a bazillion hours of listening pleasure waiting for you, but SModcast started the SModCo Network and The Nerdist Podcast started the Nerdist Network and regardless of how many more podcasts those two networks add to their ranks there is a reason that the two stalwart originating podcasts for those networks are still around. Because they are good. Listen to them, you won’t be disappointed.

Look forward to great fortune and a new lease on life!
Sharing little joys offer great hope to others.
Let’s finish this up now, someone is waiting for you on that.
More Fortunes >