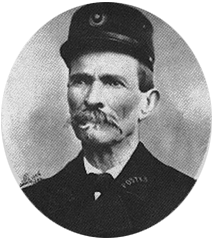 The building began in earnest in April 1879, at first with stones from his pocket. It gradually moved to stones in a basket and eventually included a wheelbarrow to move larger stones. It took him 33 years to build the palace, 20 of which were spent on the outer walls alone. From one stone to another along his postal route, he collected them while thinking to himself, “Since Nature is willing to do the sculpture, I will do the masonry and the architecture.”

He bound his masterpiece together with lime, mortar and cement, often working at night by the light of an oil lamp. After finishing his palace, he decided that he wanted to be buried in it and spent eight years building a mausoleum for himself, where he was buried upon his death about a year after he completed building it.

His completed Le Palais idéal is an exemplary example of naïve art architecture, a classification of art that is characterized by its childlike simplicity in both subject matter and technique. 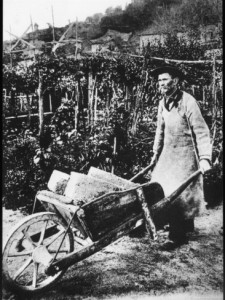 Cheval with his Wheelbarrow

What makes his palace even more improbable was that he completed it with just his vision and natural skills he had.  He had no formal schooling in architecture, construction, or any probable related fields.

At the age of 20, he became an apprentice baker in Valence and escaped military service in the Crimean War, which could have been due to his diminutive size. In 1858, he married Rosalie Revol, who was only 17. Cheval then left Hauterives to look for work and was gone for six years. During that period even his wife was unaware of his whereabouts until he returned to Hauterives in 1863.

A year later in 1864, Rosalie gave birth to their first child, a son who died one year later. Two years after that they had their second son. Then at 31, Cheval took an oath to to practice a postman position, where he was transferred to Romans City office and Bourg de Péage. Five years later, his wife Rosalie dies, after 15 years of marriage, nine of them living together. He entrusted his only son to his godfather and godmother. In 1876 he was again transferred to Sain Rambert d’Albon, before receiving his final transfer in 1878 as a rural postman at Hauterives. 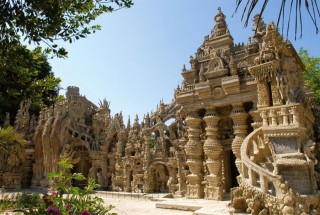 A few months after his last transfer he met and eventually married Clair-Philoméne-Richaud, who was a bit older than him.

It is the next year on April 19, 1879, at the age of 43, that he stumbles over a rock, his “stumbling block,” in Tersanne while making his rounds. That rock would be the start of a 33-year construction process, but it would not be the end of his heartbreak. About six months after the birth of his palace, his wife gave birth to his only daughter Alice-Marie-Philoméne.

Fifteen years later, Alice died and it is hard on Cheval who wrote, “Alice is bitterly missed,” on the family gravestone. In 1896, with the help of a mason he built “Alicius Villa” where he settled with his wife upon retiring at the age of 60. Joseph Ferdinand Cheval died on August 19th, 1924, two days after he certified the final version of his biography, “Sincere and Authentic.” 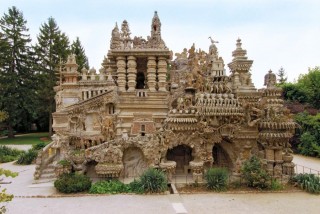 In 1969, 53 years after his death, his masterpiece The Ideal Palace is classified as a Historical Monument by André Malraux, Minister for Cultural Affairs. In 1993, it received a restoration and in 1984, Alice, one of his granddaughters, who has no children decides to give her share of the Palace to Hauterives’ municipality. It is then used for tourists where, in 2013, it was visited by more than 150,000 people the world over.

Rome wasn’t built in a day, which was something that Cheval obviously understood . There is still something to be gleaned from this logical statement, even as we continue on in this instant gratification culture, brought about by the rise of the internet age, of Google and smart devices.

“What can you do when you always walk in the same setting, if not dream? As a distraction, in my dreams I built a fairy palace,” except that Cheval took it a step further and actually made his dreams a reality. 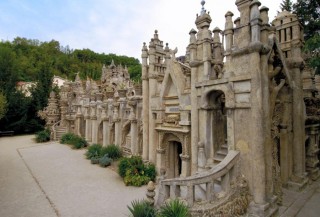 From that one stone, he set out on a legendary quest of the human spirit, delighted by the ideas that would come to him and adding to his vision. During his 32km (almost 20 miles) daily route he would sometimes add an extra 10km (more than six miles) to find stones to add to his masterpiece.

“The tongues start to wag… I was laughed at, blamed, criticized. But this kind of mental attention was neither contagious nor dangerous, and as a result they did not find it useful to fetch some doctor of the mind. I was then free to devote myself to my passion in spite of everything.”

His perseverance and persistence are commendable, in spite of his personal trials and tragedies. Without any disruption of his daily rounds, this postman made his dream a reality. For all of the research I have done to dig into Joseph Ferdinand Cheval, I can only assume that for this simple postman, it was the journey and not the destination that meant the most to him. 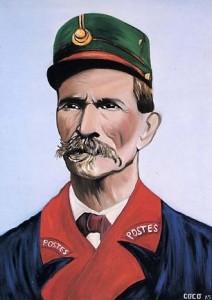 Cheval once said, “Whatever your age, whatever you wish to achieve, if you are courageous, persistent and hard-working, you are sure to succeed.”

Truer words have never been spoken. His story is a beacon for everyone. Whether you build a house, paint a picture, develop clean energy sources, write a blog, research for cures to diseases, or are looking for a way to unify the laws of physics, take Cheval’s words and his life’s work to heart. It will take time and your true purpose on this earth may not become apparent to you right now.  All it takes, however, is that one “stumbling block” that makes you step back and see something that inspires you.

For Cheval, it was that act of literally stumbling over a rock and that sparked him into action. We don’t know what it will be that will inspire us. But moreover, Cheval’s personal heartbreak and tragedy didn’t stop him. He didn’t rest on what had happened but rather probably used it as motivation. He had a vision and he wanted to make it a reality. And he did. 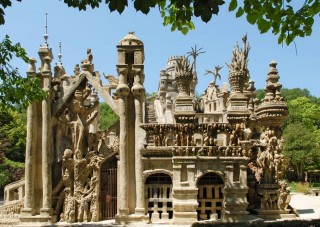 Whatever your ideal palace it, don’t try to do it all in a day. It may take you 33 years, perhaps even longer, but if you keep at it, you’ll get there. That’s just one of the fascinating things to be learned from the story of Joseph Cheval Ferdinand, the postman and creator of the “Ideal Palace.”

What is your figurative or literal “Ideal Palace?”

If it doesn’t come to mind right now, maybe you just haven’t been inspired yet, but it will happen. You will find your “stumbling block,” too.

We all have moments of inspiration, but the thing you have to question or think about is that when the moment comes, will you rise to the occasion and allow the inspiration to drive you, or will you let life get in the way?

Cheval took his inspiration and ran with it. Of course, we all can’t just drop everything and go off to do what inspires us, but we can persevere and build it little by little. We can start working on that dream.

Just make sure you enjoy the journey and you’ll be fine, just as Joseph Ferdinand Cheval was.

Even the greatest of whales is helpless in the middle of a desert.
Today it’s okay to make a few choices by going with your instincts.
Good clothes open many doors. Go Shopping.
More Fortunes >