Recapping the “Old School” Magic the Gathering Series… So far 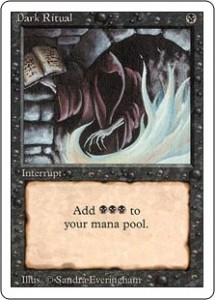 I stopped at the end of the Urza’s Block, but that isn’t exactly when I stopped playing. I played a little longer through Mercadian Masques, Nemesis, and Prophecy, but not enough to really go into the detail I did with those earliest sets.

I stopped playing, not because I didn’t enjoy it, but because I was removed from the store where I worked and played. This effectively ended my professional playing career, traveling to Pro Tour Qualifiers and such, but I still held onto my cards and played friendlies when the situation arose.

Then, around the Kawigama Block, a friend who I had been attempting to get into Magic for years starting playing, and I learned about some of what had transpired during my absence. The rule and language changes were hard to fathom after just a mere four years away from playing regularly.

I still pick up a few singles here and there and I thoroughly enjoy building decks, but my friend didn’t understand the roots of the game and the cards that really started it all, so I used this blog to educate him and others about the roots of “Old School Magic.” 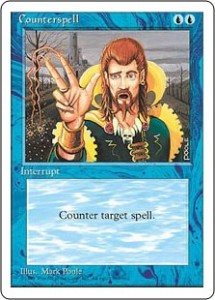 There is only one Counterspell

But I surprised myself along the way.

In Revised, I rediscovered how much the simple Dual Lands were plain and awesome. With all of the new dual-type Lands now available, having a Land that gives you two different colors of Mana and counts as both types of basic Lands is really useful when considering the abundance of spells that can give you a Mana advantage with basic Lands. I mentioned the loss of the “Power Nine” in my look at Revised, but this loss cannot be overstated. As someone who played against players who had been there since the beginning, the loss of the “Power Nine” was monumental to those original players, and some of them left because they thought the game was changing. And they were right.

But I didn’t feel their same sense of loss as I was a noob back then, so I kept at it. Then, of course, came Fallen Empires, the set that really started the Tribal bug with Elves, Goblins, Thrulls, Merfolk and Thallids. Now, admitedly, the Thrulls and Thallids didn’t take hold like the others, but it set an expectation for players to expect new tribes or a building of old tribes with every new expansion. 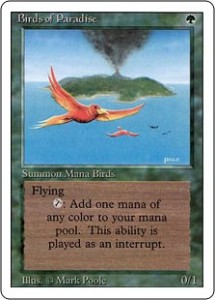 Birds of Paradise should have remained Summon Mana Birds

Fourth Edition was the end of the original Magic core set at is was. It contained a lot of cards, from the Alpha and Beta days, as well as, quite a few additions from other expansions. In my opinion, this was the core set that defined my playing career – Ball Lightning, Birds of Paradise, Hypnotic Specter, Royal Assassin, Serra Angel, Shivan Dragon, Balance, Control Magic, Strip Mine, Mishra’s Factory – I could go on, but these were the power cards to me, especially back then. Even now, if I need certain types of creatures, I reach for Fourth Edition before other sets. If I’m in particular need of a big Red creature, Shivan Dragon is still my first choice.

Then came the deep freeze of Ice Age, the first standalone expansion set. Aside from including standards like Counterspell, Dark Ritual and Giant Growth, it shook up the landscape with Snow-Covered Mana and a few new power cards like Jester’s Cap, Deflection, and Blinking Spirit, but it also set Lightning Bolt on its way to the printing of Incinerate. Following the deep freeze was Chronicles, with its reprinting of some of the original expansion set cards. 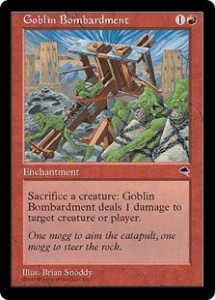 Homelands was a decent set, but in hindsight it was just a short layover making us wait longer for the arrival of Alliances, the set that shook the game to it’s core by bringing about Force of Will and other spells that basically cost nothing. It also hearkened the age of the first turn Shivan, with help from Ice Age’s Tinder Wall and its own Elvish Spirit Guide.

If the Ice Age Block was eye opening, the new rules of Mirage – phasing and flanking – were downright eye-popping, while Visions was just a further extension of the block. Before the conclusion of the Mirage Block with Weatherlight, Fifth Edition was released as the new core set causing quite shock and awe with the removal of some very core cards from the core set.

Tempest brought about the rise of the Slivers. No set in all of Magic to that point had introduced a tribe that was so diverse and widely used by players of all colors as the Slivers from Tempest. Stronghold and Exodus were more of the same, with more Slivers and an expansion of the game as a whole, with new cards, cantrips, and combos. 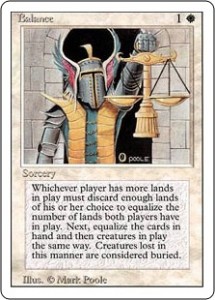 Balance could tip the scales in your favor

The Urza’s Block of Saga, Legacy, and Destiny were great. For the most part, players widely excepted the new Cycling ability as a wonderful addition to their ability arsenal. But with Classic Sixth Edition, Magic changed, and the Interrupt was a thing of the past.

Now, I didn’t quit Magic. I continued on for a bit before going on a long hiatus. I didn’t leave because the game had changed or because things I had been doing were now no longer allowed. I didn’t quit because the Banned and Restricted lists were interfering with my decks, and life got in the way. It is just that simple.

But I didn’t sell my collection or disassemble my decks. I held on. And then I started playing again, and now, thanks to this series, I have rediscovered my love of deck building. 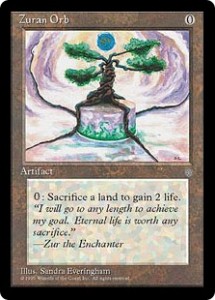 I may go back and dig further into the creatures, spells, and colors of “Old School Magic,” or I may continue the series with the Mercadian Masques Block. After that, if I choose to go further, I’ll have to do more research and start a new series, because it would no longer qualify as “Old School Magic,” at least to me.

I could go back and examine the original expansions of Antiquities, Arabian Nights, Legends, and The Dark, because although they came out before I started playing, they are “Old School” and I have plenty of experience with the non-reprinted cards within those sets.

I’m really not sure what’s next, but I promise you it is not over. I just have to decide what the next logical step for the series or the next series is. All in all, if you’re a fellow “Old School” player, I hope you enjoyed this 19-post trip down memory lane from About the Old School Magic Series through Urza’s Destiny. If, on the other hand, you’re a player who came to the game after these sets, I hope you learned a little about what the game was like way back when.

Who’s up for a game?

A Recap of the Old School Magic Series

Good clothes open many doors. Go Shopping.
To let another into your heart, first let yourself in.
Fame and fortune are coming your way.
More Fortunes >