Musings from the Jurassic World trailer, is it a reboot or a continuation and other questions… 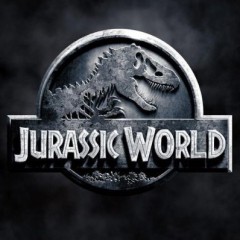 It starts with “On June 12… The Park… Is Open,” but the fanboy in me has already moved on to other things.

What I am about to do, is state my fascination with the new Jurassic World, while at the same time asking the questions I hope the movie answers. Why? Because I fell in love with the first Jurassic Park over 20 years ago when I saw it opening weekend.

Then I saw Jurassic Park: the Lost World, and Jurassic Park III and the entire franchise seemed to be less than it was. The second and third movies were not bad, they just weren’t groundbreaking. They can be entertaining if you like monster movies or are just looking for a good time, but they don’t have a cinema feel.

So when the Jurassic World trailer premiered, I was anxious and then nervous.

Before, I continue, I did not look into any of the plot points I am going to question. Why? Because, I want the movie to answer or not answer the questions, I will not spoil this movie for myself.

The boat we see in the very beginning of the trailer has a name… “Isla Nublar” or is that the destination. Isla Nublar was the home to the first park in Jurassic Park. The one Drs. Grant, Sattler and Malcolm didn’t sign off on. So right away, I’m asking myself, does this movie even take place in a world where the other three movies take place, or is this a reboot of sorts?

While my brain was thinking that thought over, the trailer continued… And the woman, who appears to be in charge, states “a whole new frontier has opened up, we have our first genetically modified hybrid.” Chris Pratt, a Muldoon/Malcolm hybrid (again, just a guess) says to the woman, “you just went and made a new dinosaur? Probably not a good idea.”

This is when the first question comes back to my head, does this take place in the same world as the other three or is this one on its own?

Jurassic World The Park is Open

There is no clear indication in the trailer which it is? But first and foremost, I really hope there is an explanation in the movie. It doesn’t have to be long, reference it as the “first park” or reference the first park, either way, I’m find with something small, but I want to know. The reason I want to know is because it sets up a few arguments in the trailer in my head.

Starting off, if the first park existed, and the two disasters on the “secret” islands, then good for InGen, if it still is the company in charge, for keeping at it. But why, in the name of all that is holy, would you create a hybrid, and a carnivorous one at that? Wouldn’t mixing a Triceratops with a Stegosaurus be pretty epic? But still, knowing their track record with having failed to see the first park or even the safety of those working on the “secret” islands, why would you try to hybrid a dinosaur?

My brain goes even further… Are they lying to us in the trailer? Maybe the park is 20 years old and the public has lost interest, which is something the public tends to do. Then of course try to hybrid something new to create interest and increase profitability… But in the trailer, every time we see park it is packed… I don’t know, but that’s what I was thinking. 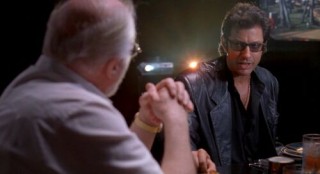 Now, if this is more of a reboot than a continuation, it could easily explain why they created a hybrid, although I would like to hear a copycat “lunch” conversation from the first movie, where the woman in charge (assuming she’s the one in the white lab coat) has to answer questions from a Malcolm-type character about, “your scientists were so preoccupied with whether or not they could that they didn’t stop to think if they should,” which was Dr. Ian Malcolm’s quote from that first discussion, before they started talking about condors.

If however, it is a continuation of the other three movies, it does explain the last scene in the trailer with Chris Pratt riding his motorcycle with the raptors in toe. Why? Because it means at least in one regard they learned from their mistakes.

Chris Pratt and the Raptors (What a Great Band name!)

In the first movie, Hammond and his team are present at the birth of a Velociraptor, and Hammond tells Grant that being the first creature he comes into contact with it means it will trust him. Thus we can assume that instead of just throwing them into a cage with other raptors away from human contact, these raptors all grew up with humans and learned to trust them, making them no more a threat than a dog.

However, at the same time, it still leads to questions about why they would go about making a hybrid, although again, if the public had lost interest in the park, that would be a good explanation.

There are other great things in the trailer that are nods to the prior movie, the flare, the kid hiding trying to remain still, the river, etc. And of course, John Williams is back with his breathtaking score.

Regardless of how it plays out, I hope they answer these questions, even if just in passing. Either way, they’ll still have my money and I will go see it.

Things are turning for the bright side.
Whoever wants to reach a distant goal must take small steps.
You are interested in higher education, whether material or spiritual.
More Fortunes >