Horse Under Water was the second book published by author Len Deighton, the first being his spy novel debut with “The IPCRESS File.” It continued, what would become a, series of four novels about an unnamed spy or secret agent, who in the film adaptations was named Harry Palmer and portrayed by Michael Caine. 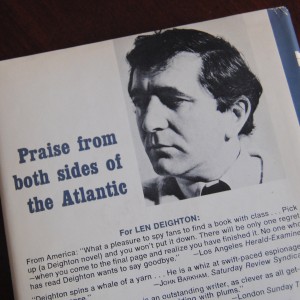 Len Deighton recieved praise from both sides of the Atlantic

The front flap describes it as “a novel in which skin diving, drug trafficking, and blackmail all figure, as the dead hand of a long defeated Hitler-Germany reaches out to Portugal, London, and Marrakesh, threatening to bring about a resurgence of horrors thought safely interred forever.” And as succinctly as that description may be, it’s also another peak behind the curtain at, not only, how spies and secret agent act, but how they think, as well.

Ok, maybe not all spies, more like most spies, but it definitely sheds more light on Deighton’s unnamed spy, who we learn even more about in the text.

“I’m not recruiting dead heroes, I prefer live cowards.”
“The day the Government hands out explanations is the day after husbands start telling their wives where they’ve been.”
“…diligence brings more agents to pensionable age than bravery ever did.”
“Power is like a fried egg. No matter how equally you try to divide it someone is sure to get most.”
“It was alarming that so few people told me the truth.”
“The truth varies in inverse proportion to the influence of the person concerned.” 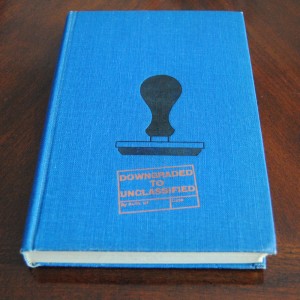 Horse Under Water Downgraded to Unclassified

And as always, Deighton’s unnamed spy is surrounded by brilliance, only outshined by the unnamed spy himself, when he finds the time to give it a shine every now and again. The smarts surrounding him come up with things like;

“We all got problems…and problems obey the laws of perspective; they look big close to.”
“Oh, I know that you have a thousand reasons for not slipping up, but remember that the man who fell of the Empire State Building said to a resident on the first floor as he fell past him, ‘So far so good.’”
“You know how money is… It’s as tricky as uranium but ten times more dangerous. It disappears like youth or multiplies like enemies.”

But not to be outwitted our unnamed spy replies with “Yeah, it took me a lot of time and talent to make those enemies.”

There are other things, related and completely unrelated to the story that will stick with me for a long time. 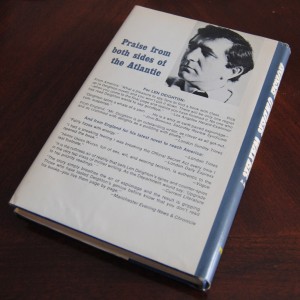 The Back Cover of Horse Under Water

And like our unnamed spy says in the middle of the book, “don’t ever hanker after tidiness. Don’t ever think or hope that the great mess of investigation that we work on is suddenly going to resolve itself like the last chapter of a whodunnit…”

It’s only Len Deighton’s second novel and it’s only the second one I’ve read, but already he’s outdone himself. I read The IPCRESS File and now that I’ve read Horse Under Water, it’s only a matter of time before I pick up Funeral in Berlin, because I just can’t get enough.

By comparison to, who else but, Ian Flemming’s James Bond, Deighton’s unnamed spy again appears to be the thinking man’s antihero hero. I just can’t find another way to say it, but you can rest assured that I will continue to read more of Len Deighton and I look forward to the final two books in the unnamed spy series. I just can’t get enough of this unnamed spy who the front flap describes as “insolent, fallible, captious, and capricious.”

And why shouldn’t I borrow those words? I want this to be a spoiler free review, but I can’t in good conscious try to come up with a better description without breaking out the thesaurus and saying the same exact thing in different words.

However, I must urge you to read The IPCRESS File first, because why not start with the book that started it all. From there, more onto Horse Under Water, you won’t be disappointed. Unless, of course , you’re looking for James Bond, in which case, Len Deighton’s unnamed spy may just surprise you yet.

Read the Secret File of technical information and quotes from Horse Under Water.

A difference, to be a difference, must make a difference.
Even a broken clock is right two times a day.
Look forward to great fortune and a new lease on life!
More Fortunes >