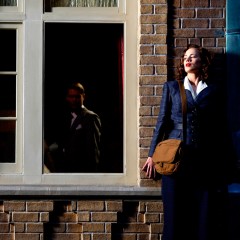 The following took place on Friday February 13th, a few days after the airing of Episode 6 of Agent Carter on ABC titled, “A Sin to Err.”

It was an email correspondence between myself and undercover operative L. This is not uncommon. Geeks who find other geeks in work circumstances will commonly bond over commonalities from TV shows, to movies, to comics, books, and more.

[Agent Palmer]: Have you caught up yet?
[L]: Yep, watched it last night. That was a great episode.

[AP]: Twitter lost it’s shit the way it ended!
[L]: You know she is going to win them over and they will wind up helping her, but it was intense.

[AP]: I don’t see it… She started this on her own with Jarvis and Stark, she’ll finish it on her own. They may want to help her, she won’t accept it!
[L]: I think Daniel will stay with her at least.

[AP]: I don’t know. He may have a thing for Peggy, but he’s totally in Jack’s pocket. He’ll only get to help Peggy if Jack allows him to…
[L]: I don’t know. I think they set up to be a good guy from the beginning and he always treated Peggy with respect. I think he will do what’s right in the end.

[AP]: But he’s betrayed by her. If he never saw her scar it would be different, but he’s hurt by her perceived double agent status… Maybe when he learns the whole story, but I don’t think the SSR will get the whole story until Peggy wipes out Leviathan herself and then gives them the facts… Also, if she does take down Leviathan, should would probably get the chance to disband the SSR and start SHIELD with Howard, which is the ending I’m hoping for in some way… The SSR drools, SHIELD Rules!
[L]: fair enough. I can see that.

[AP]: Anyway it would be unfair to write Daniel into a love triangle with Peggy and Cap, because she’ll always pick the Capsicle everytime!
[L]: lol true. But she never winds up Captain America. He finds her later when she’s old. So I just don’t know.

[AP]: I know, but right now, in the middle of it all… She’s yet to slay the bad guys and yet to co-found SHIELD, yes she’s awesome and she’s Agent Carter, but does she really have time for love, beyond Cap’s? Also, she’s afraid anything she loves will get destroyed! That’s quite the hurdle to get over…
[L]: I know, only 2 episodes left to figure it out. Either way, one of the best mini series I’ve seen.

[AP]: I know, I’m just grateful you’re one of the people that realizes it IS this good, BECAUSE it is a miniseries!
[L]: Oh man yeah, this much stuff would have taken 3 series to get to this point.

[AP]: Just checking… That first series would have ended with Stark asking her for help.
[L]: Yeah, really.

[AP]: I can’t figure out what the second series would have been, except that it might have ended with Dottie’s past?
[L]: Or after they got out of Russia.

Things are turning for the bright side.
Let’s finish this up now, someone is waiting for you on that.
Nothing in the world can take the place of persistence.
More Fortunes >