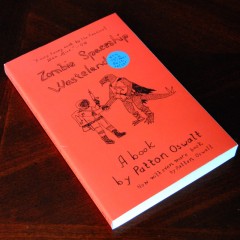 Back in 2011, Patton Oswalt debuted as a solo author with his autobiographical Zombie Spaceship Wasteland.

To begin with on the cover and back cover, as well as, on the first two pages of the book are nothing but quotes of praise for this book. So you don’t have to take my word for it, there are at least 28 other people or entities, that regard this book as some form of hilarity or greatness.

The title comes from a question, “Are you a Zombie, a Spaceship, or a Wasteland?” The explanation is

“Each of these categories represents different aspects of a shared teen experience–not fully understanding how the world works, socially or economically. The early outcasts–like me– were late to sex and careers. If we did find a vocation, it usually involved drawing or writing or something creative–work that’s done in the home, and usually alone. The real-world experience we’re going to need, as writers or artists or filmmakers, will come later, when we actually have to get a real job to support whatever creative thing we’re hoping to do. 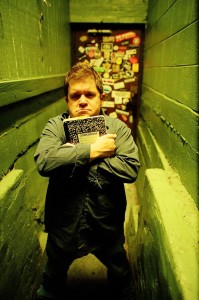 So until then, anything we create has to involve simplifying, leaving, or destroying the world we’re living in.”

Of course there is a lot more to this book than answering that question, which he does.

Then there is the sheer willpower Patton displayed by actually starting and completing the writing of this book. “The idea of writing a book, becoming a journalist and then, hopefully, a novelist, couldn’t withstand my sudden ambition to craft a perfect dick joke. Five thousand words a day seemed silly when I could bring a room full of drunks together with fifteen perfectly chosen words.”

In addition, to that, being a geek or nerd like the rest of us, he must have had a little trepidation because “Words on paper, no matter how many times they’ve been rewritten and edited, are forever.” But he moved through it and out the other end came this book, a wonderful adventure full of insights about:

“It’s probably fifty feet high, maybe. I can’t jump over it, so that’s probably fifty geet. Numbers are how you understand the world. Like, a dad makes a million dollars a year. Gum stays in your stomach for seven years. Only grandparents are allowed to buy special shirts that always have five pieces of candy in the pocked. And anything I can’t jump over is fifty feet.”

“None of it changed our reality… If the victories we create in our heads were let loose on reality, the world we know would drown in blazing happiness.” 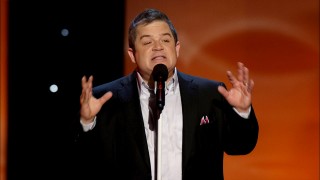 By the way, “blazing happiness,” sounds epic in a happy and sad kind of way.

“I began thinking of life—a real life–being about movement and travel and awareness. Or, at least, I thought awareness came from seeing the world, experiencing it. I still think like that.”

“I suspected, around the time I graduated college, that we’re all versions of targets, fired at by indifferent events. If that was the case, then I wanted to be a moving target.”

“We lucked out living on a planet made thrilling by billions of years of chance, catastrophe, miracles, and disaster, and he’d rejected it. You’re offered the world every morning when you open your eyes. I was beginning to see Pete as a representative of all the people who shut that out, through cynicism, religion, fear, greed, or ritual.”

But don’t for a minute think that this is just a serious book of Patton’s memoirs. He brings the funny as well, after all he is a comedian. 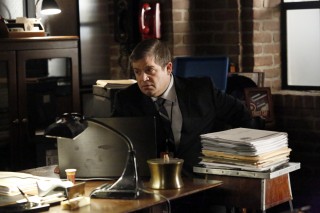 “Also, the term “gifting suite” has this sinister, Orwellian quality. Like something Warren Ellis or Grant Morrison would come up with as a creepy throwaway bit of dialogue in one of their mind-bending stories. Maybe a “gifting suite” is a torture room or a lab where they infect subjects with biological agents, shit like that.

It still wouldn’t be half as horrifying as the actual suite I visited.”

On Working in an Office

And let us not forget that some of the beginnings to his epic Star Wars filibuster on Parks and Recreation can be found under one of his pseudonyms Erik Blevins,  where when retelling his version of the Star Wars prequels he states that when “Obi Wan realizes they need the help of the Wookies so he goes to the planet of Wookies where they use Ewoks as tampons.”

His other pseudonym, Neill Cumpston, wrote some movie reviews, where he appears to have found his voice with the simple saying of, “They only bad movies are boring ones.”

No, I haven’t spoiled the book for you or created a post of cliff-notes. I have simply used his prose to show you how amazing this book is, and there is a helluva lot more, of that I promise you. What jumped out at me is in this post, what jumps out at you, well, you’ll have to read it for yourself to declassify that information.

Read the Secret File of technical information and quotes from Zombie Spaceship Wasteland.

And now for your enjoyment, the full eight plus minutes of that Parks and Recreation filibuster.

Good clothes open many doors. Go Shopping.
You are interested in higher education, whether material or spiritual.
Look forward to great fortune and a new lease on life!
More Fortunes >