Revisiting Indianapolis 500: The Simulation from 1989

Developed by Papyrus Design Group and distributed by Electronic Arts (EA), Indianapolis 500: The Simulation, known as Indy 500, was simplistic and grand all in a singular game that was released for DOS and Amiga. 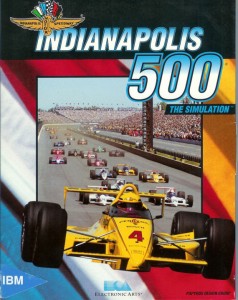 Indianapolis 500 The Simulation 1989 for IBM

I seriously spent hours playing the DOS version driving around the Indianapolis Motor Speedway, and I never seemed to get better. I kept playing, however, because it was fun.

Indy 500 was not the first racing game, but it was the first to really allow you to tweak your car setup. These changes would directly affect the way your car handled. It’s quite possible that when I was tweaking, having no idea what I was doing, I was actually making it harder on myself.

I replayed it a couple of times recently and discovered that of the three teams you can choose from – “March/Cosworth,” “Lola/Buick,” and “Penske/Chevrolet” – the Penske team has the fastest default setup.

You can choose to practice, qualify, or race; a 10-lap (no damage, no yellow flags) race, a 30-lap (no damage) race, a 60-lap race, or a 200-lap race. In each of the races the field represents the actual starting grid based on qualifying for the 1989 Indianapolis 500, with the exception of the player’s car number 17, which replaces car #29 of Rich Vogler who qualified last in 33rd place. 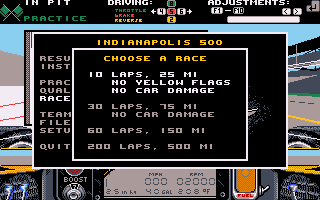 Indianapolis 500 The Simulation Choose a Race

The actual winner of the 1989 race was Emerson Fittipaldi, so if you win any of the races you can imagine that you beat a two-time Formula One World Champion, a one-time CART champion and a no-time Indianapolis 500 winner, as you would have fictionally beat him in the 1989 race. That year marked his first Indy 500 win, and his second didn’t come until 1993.

I’ve attempted some of the longer races that include damage, but I always manage to crash out. However, the 10- and 30-lap, no damage, races are really fun.

Yes, it is pixelated and the graphics seem less than perfect compared to the games of today, but for 1989 this was close to the pinnacle of a graphic representation of an Indy Car simulation race game. The realism within the game for car controls is great. It’s touchy and if you’re not careful you will find yourself becoming well acquainted with the outer wall of the Indianapolis Motor Speedway. 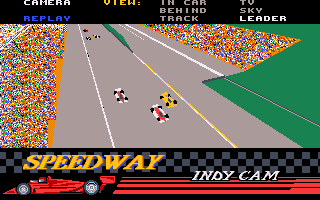 The game also includes a replay mode that offers players a chance to replay the last 20 seconds of racing from six different camera angles; In-Car, Behind, Track, TV, Sky, and Leader.

According to Wikipedia’s entry on the game, “an auto racer praised the game’s graphics, controls, and realism in Computer Gaming World. He described it as a ‘hyper-realistic simulation [and] a valuable educational tool’, and advised casual racers uninterested in running many laps to test each change to the racecar’s design to ‘stick to Out Run.'”

Although, the auto racer is unknown, the sentiment of telling casual racers to stick to Out Run, is fantastically brilliant.

This game represented a shift from racing games like Out Run to competition racing simulations for Indy, NASCAR, Formula One, and others. It was a necessary step in the evolution of racing simulations. For being the first successful step in that line of games, it is a legend, albeit a dated one these days.

Indianapolis 500 – The Simulation Box Art Back

Indianapolis 500 – The Simulation Manual and Disc

Indianapolis 500 – The Simulation Crash brings out the Caution

Indianapolis 500 – The Simulation Start of the Race