The Newsroom… Welcome back Mr. Sorkin 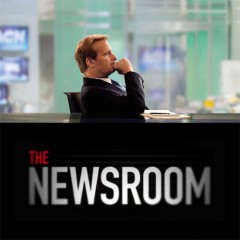 I finally found the time to watch Aaron Sorkin’s new show, “The Newsroom.” I should have found the time sooner. It reminds me of the first few seasons of West Wing, fast paced, witty and extremely well written. It Mr. Sorkin doing what he does best.

The critical reviews have been somewhat mixed, but I can’t see why. Is it because this show isn’t on NBC? Is it because they expected him to change the formula for HBO? Well,  the critics seem to be losing touch and anyone who doesn’t like this show is completely off base. I’ve come across only a few that seem to see this show as I do; smart.

West Wing was critically acclaimed. Sportsnight and Studio 60 on the Sunset Strip were short lived, but still on par for what Sorkin fans expect from him. The Newsroom fits right in. I’ll admit, that I’ve had high brow discussions with friends on the exact topic of the rant at the beginning of the episode, but hearing those words written for a Sorkin character, coming from an actor with great delivery, just proves the point.

Is America the greatest country in the world? No, but it could be. And Mr. Sorkin, your new show, however long it lasts, is appearing on television at a time, when people distrust the news so very much, that they’d rather get it from facebook or twitter than news anchors. The younger generations will learn something from your show, the only question that remains is, will they watch it?

I will. As I did, Sportsnight, West Wing and Studio 60. Thank you for giving me a reason to watch television again Mr. Sorkin, I had lost hope.

For those of you that are interested, below is the entire pilot that HBO put online. Enjoy.

Look forward to great fortune and a new lease on life!
Let’s finish this up now, someone is waiting for you on that.
Fame and fortune are coming your way.
More Fortunes >