Rotospective: The Rolling Stones’ and Ralph Bakshi ‘Harlem Shuffle’ Video is the kind of magic that happens when Bad Boys Collide

Ralph Bakshi’s collaboration with The Rolling Stones for their “Harlem Shuffle” music video premiered on the night of February 28, 1986 at the 28th Annual Grammy Awards on CBS.

This pairing started with a phone call in the fall of 1985. It was from Tony King, manager for The Rolling Stones, who said they were looking for a new music video.

“The Stones were the bad boys of rock ‘n’ roll, so they came to the bad boy of animation,” Ralph laughs. “How could you not want to direct a Rolling Stones video?”

And as far as “bad boys” go, how could The Stones go wrong with the director of Fritz the Cat, Heavy Traffic, Lord of the Rings, American Pop, Hey Good Lookin’, and Fire and Ice; all movies that Bakshi had released prior to The Stones reaching out to him. 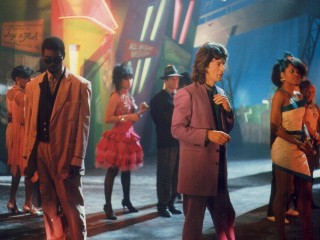 But it wasn’t a fairy tale, as most things aren’t. I couldn’t find the original due date for the video, but what started in a phone call in the fall of 1985, culminated with a change in plans. On the same day that the Challenger exploded, January 28, 1986, it was decided that since The Stones were up for a Lifetime Achievement Award. As a result, the video needed to be done in time for The Grammys that year.

Now animation isn’t something that is easily sped up, at least as far as production is concerned. So in the face of budget cuts, massive sets still under construction, and Jagger’s and Richards’ constant issues, there was still a lot to overcome and only a month to do so.

The Jagger / Richards issues were because “Harlem Shuffle” was from the 1986 Dirty Work album, their first together as a band since Jagger split for his first solo album with She’s the Boss.

But despite all of that, Bakshi had a team and he trusted them. That team would soon go on to help him reestablish Mighty Mouse in Mighty Mouse: The New Adventures, which included animation director/designer John Kricfalusi, the future creator of The Ren & Stimpy Show. 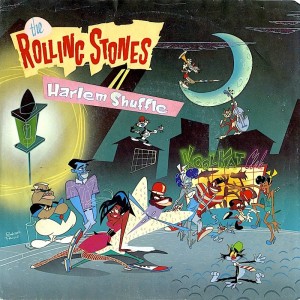 The song itself was a cover from R&B duo Bob and Earl in 1969 which went up to #7 in the UK charts and was produced by Barry White. It was one of the rare cover songs The Stones released as a single. Keith Richards said once in 1986, “I’ve been trying to get Harlem Shuffle on an album, without actually telling Mick, for 5 or 6 years. I thought that was a natural number for him to sing – it was made for him. I’ve been giving him cassettes with Harlem Shuffle stuffed in the middle somewhere for a long time, but I never got any real response. One night we were in the studio and Woody and I started plunking away at it. We were amazed at how simple the song was – about 2 chords. The band was just warming up on it, jamming, when Mick walked in and started singing. We realized, YEAH. And we did it in 2 takes. So it paid off eventually, though it cost me a fortune in cassettes.”

The video itself was one of the first to combine live action and animation. It was nominated by MTV for a Video Music Award for Best Group, but lost to the nearly completely computer-generated Dire Straits Money For Nothing video.

In and of itself, the video is classic Bakshi and a sign of things to come. With a retrospective eye, you can see the beginnings of Cool World in not just the combining of animation and live-action but in the animation style itself. That style seems old school because it borrows heavily from the early days of animation where Bakshi cut his teeth on Heckle and Jeckle, Deputy Dawg, and the late 60’s incarnation of Spider-Man. 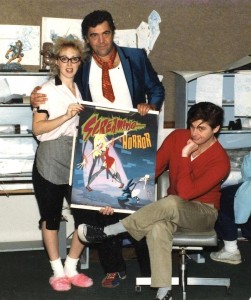 The video is also reminiscent of the future successful project of Animation Director Kricfalusi. If you don’t see the Ren & Stimpy in this video at least in style, then you aren’t paying attention.

The style of the live action screams the 1980s in every way from Jagger’s pink suit to the set design with more neon that you can shake a stick at. Meanwhile the band plays behind him outside the “Kit Kat” club, with Richards looking as cool as ever, cigarette hanging out of his mouth the entire time as Jagger and many extras dance. They are interspersed with the animation of cats following suit, dancing and singing with the band.

What does all of this mean? It means when the bad boys of rock reach out to the bad boy of animation, something good can and most likely will happen for fans of both sides. Don’t believe me? As dated as the video is, it’s still a solid artistic piece reflecting well on all parties involved.

A still from the Harlem Shuffle Video

Your moods signal a period of change.
Sharing little joys offer great hope to others.
The path of life shall lead upwards for you.
More Fortunes >