Small Oddities: Dwarves and a Goblin in “Things you don’t see everyday”

Every so often, more often in the current “internet era”, you see something that doesn’t meld with what you know. I’ve come across two such things: One involves dwarfs and their craftsmanship, and the other involves goblins.

The first of these oddities is a panel from “Vampirella.” That’s best prefaced, however, by some details about Dwarven craftsmanship. Dwarves, from Germanic mythology are best known in their form from Tolkein’s Middle Earth. They are a short stocky bunch and, much like their mythical forebears, are great craftsmen. They are smiths, stoneworkers, and metalworkers, each well known for their weaponry in all works of literacy and fiction.

So, I laughed at the absurdity of the panel in “Vampirella: Death & Destruction #1,” when Vampirella breaks her captor’s chains. 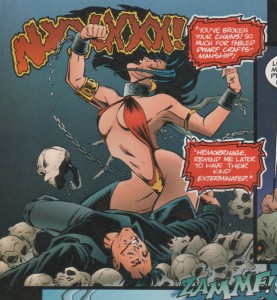 Her captor, Mistress Nyx, says “You’ve broken your chains! So much for fabled Dwarf Craftsmanship! Hemorrhage [a lacky], remind me later to have their kind exterminated.”

First and foremost, Vampirella is strong. However, there is the possibility that Mistress Nyx neglected proper care and maintenance of said chains. I will lean more towards the strength of Vampirella over the lack thereof in the Dwarven chains as the most plausible explanation. It still isn’t something you see everyday.

In fantasy, we can accept super strength and intelligence. We can accept magic and sorcery. We can accept great legends and destinies. However, for my part, below par Dwarven chains is a little too hard to believe.

Which brings me to number two: “The Sleeping Goblin Guard” by mdlillustration on deviantART. 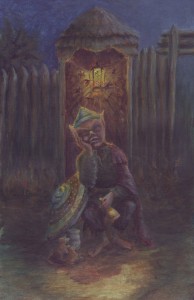 The Sleeping Goblin Guard by mdlillustration

First off, this is an amazing painting, but it follows an odd concept. As the title states, this is a goblin guard sleeping at his post. It’s just something that I’ve never seen or conceived before.

Goblins are legendary evil creatures. I’m not all that well read on their origins, but Tolkien, if he’s to be seen as the master of modern fantasy and forebear of almost everything since, crafted goblins that were dull, dim, stupid, grotesque, and addle-minded, but never lazy.

Coming from a “Magic: the Gathering” perspective, the race of goblins fits right in with Tolkien’s. As much as I’m sure they need to sleep, I only ever assume their dereliction of duty is due to their intelligence and not stamina.

I know that goblins are warmongering, stupid creatures. I know they are just as likely to blow themselves up as they are to kill their enemy, but for some reason, in my head, as a reader of Tolkien’s goblins and a player of Magic, I can’t see them dozing off on their post.

So, Dwarven chains failing and a goblin sleeping at his post…

There are things that you see and hear that make you take a step back and go, “What?” In a world full of crazy things, are there really any oddities left?

Yes. Yes there are. Including the two items that I never would have expected to see.

In a world where new ideas are rare, these two are fresh. The next time I come across a goblin-guarded anything, I’ll take the time to look for one who hasn’t had his caffeine fix. The next time myself or someone I know is bound by Dwarven chains or protected by Dwarven mail, I won’t assume there is no escape or that protection is guaranteed.

These oddities serve as lessons. There are still new things to learn and new ideas out there. You just have to keep looking for them.

That’s the adventure in a life worth living.

Things are turning for the bright side.
The path of life shall lead upwards for you.
Today it’s okay to make a few choices by going with your instincts.
More Fortunes >