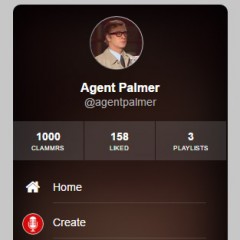 What is Clammr? I’ve covered this before, but in short, it’s a way to easily create and share short audio clips. Now it’s commonly used for podcasts, but it can be used in many other ways too.

Easy, I am the “unofficial” Clammrer for almost every podcast I subscribe to. Now, it didn’t start out that way. Originally, it started as self-promotion, a marketing ploy if you will, by pulling the clips from podcasts when they mentioned me.

And my first clips are like that, including my very first ever clip in which Grant “The Kilted One” and Jason “The Angry Ginger” talk about my love of podcasting.

But I do enjoy podcasting, all jokes aside; I do, I enjoying listening to them, being behind the scenes, which includes producing them, and marketing them, in addition to being a perpetual guest, prompting Bill from The Wicked Theory Podcast to coin the phrase that I have coopted for my own, “Proxycaster.”

So you can imagine that as a producer on a few shows, just by helping behind the scenes on others, and by being an engaged fan of still more, clips that mention me can add up. However, I recently changed my Clammr tune to include just about any clips.

Clammring, not only my mentions but the fun and promotional bits from those shows as well, was easy enough, as I was already listening to the podcasts; I just had to create the clips from my timestamped notes.

Now, I don’t know if any of those shows will make me the “official” Clammrer, but I do know they all appreciate the effort as most, if not all of them, have actually told me so. 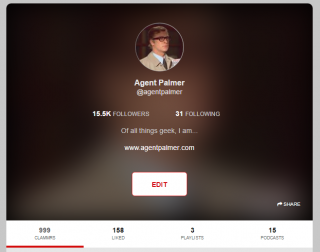 In doing all of this, my main goal is to spread the word on behalf of these shows, as they all have talent and they all entertain. For me, whether I am behind the scenes or just a fan, it seems the least I can do to repay them for entertaining me.

The added benefit is that what started as just live-tweeting for interaction with them has turned into genuine friendships.

So with all of that in mind, I did in fact Clammr away.

The 1,000th clip had to be something special, something to share with all of the shows that helped get me there. So what better way to reflect what my Clammr account is than to create a super-cut of those shows mentioning me. Which I did.

These wonderful shows I speak of are:

There are others of course, but those are the main ones I always listen to when they release new episodes.

And I thank them all for their entertainment and making bad days better and good days great. But above all else I must thank the group behind the Clammr App itself, which enabled this milestone of 1,000 clips to even be possible.

They truly created a podcast’s best friend. And of them, I must say a special thank you to Parviz Parvizi, who not only helps me if I have issues or questions but is open to suggestions I have made by being the “power user” or “podcast super-curator” of Clammr that I am.

Even the greatest of whales is helpless in the middle of a desert.
Even a broken clock is right two times a day.
A difference, to be a difference, must make a difference.
More Fortunes >