DC takes a page from Marvel’s playbook for Suicide Squad, but to different results. (No Spoilers)

It’s hard for someone who enjoys comic book movies and isn’t completely immersed in the source material or the comic books themselves, to not draw parallels from Suicide Squad to Guardians of the Galaxy.

Before I get into the specific parallels, let me say this; Suicide Squad is a fun movie. I understand it’s getting a lot of flack on the internet, but are we surprised by this?

Earlier this year, I enjoyed Batman vs. Superman: Dawn of Justice (BvS), but it appears that I was in the minority, as the rest of the world seemed to give it mixed reviews, with many coming down hard on director Zack Snyder.

This is important because it put a lot of performance pressure on Suicide Squad, since shortly after BvS, Captain America: Civil War, came out to rave reviews. And although it’s also important to note that Suicide Squad did great at the box office so far, it’s the reception that I will be discussing going forward, as the box office is concrete, showing both as financial successes, the receptions differ greatly. 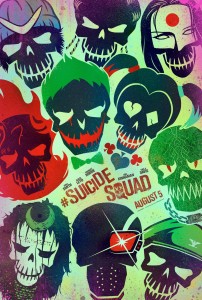 Now there are a lot of other things that don’t make sense in Suicide Squad’s reception, including that big box office, but let’s draw the Guardians of the Galaxy (GOTG) parallels, as they do play a part in this.

First, the film is comprised of lesser known characters as was GOTG. Before this film many in the general public couldn’t have named Deadshot, Captain Boomerang, El Diablo, Killer Croc, Katana, Slipknot, or Enchantress any more than they could Star-Lord, Gamora, Drax, Groot, or Rocket. Harley Quinn? Maybe. Joker? Sure – But these two are the exceptions.

This partly complicates the reviews and the parallel and subsequent differences between the two films, as I’d be willing to bet many “film” critics didn’t know the former or latter teams in great detail, yet we get backstory for all of them in each movie. The writing does have a great influence on the character introductions, but in both cases the introductions and backstories are just scratching the surface compared to the issues upon issues of comics knowledge that the fans have.

Anyway, I don’t buy that people didn’t understand who the characters were, they all received fair introductions, so “not knowing” comes off as just an excuse to nitpick.

Second, both films are about a group of misfits, though Suicide Squad could be more attributed to the “bad guys” moniker, both have a chip on their shoulder with a “what has the world ever done for us?” mentality.

Third, the groups come together in order to tackle an enemy. This seems obvious, but it’s only the most obvious plot parallel, because the fourth and final parallel is that cinematically, both films marry a score with classic hits (new and old) in a soundtrack that should sell very well. I know GOTG did, and I expect Suicide Squad will do the same.

And for me, both of them were highly entertaining films. In both cases I didn’t have more than a cursory knowledge of the characters going in, and that may have been to my benefit. 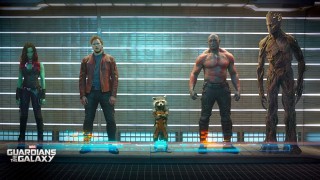 Guardians of the Galaxy

But with all of that, why isn’t Suicide Squad being touted as the Guardians of the Galaxy of 2016? The parallels on screen seem so apparent, how come the opinions of the films aren’t also near the same plane or existence?

Well, for one, GOTG was well received by critics and fans alike, while Suicide Squad is only being well received by fans (and I’m not counting superfans like Ed from The Wicked Theory Podcast, who have read the comics since 4th Grade and would probably never have been completely satisfied to begin with).

And I say that with all due respect to Ed and fans like him. Recently, during the after show for the new series Preacher, show creators Seth Rogen and Evan Goldberg explained to Chris Hardwick all about the changes they made from the comic to get the pages onto the small screen, I realized that changes HAVE TO HAPPEN. And it’s because I read that entire series, I could contextualize why that’s true.

And you know what? It’s best that the people making those decisions have at least a small appreciation for the source material. Not to pick on my friend Ed, again, but I would wager that unless he could write the perfect script, anything he wrote based upon his knowledge and his fandom would’ve faced a lot of studio interference before being ready for the big screen. Just like I would expect anything Bill, creator and host of The Wicked Theory Podcast, would have scripted for his beloved Preacher, would also have had trouble making it to the small screen.

Those are just two examples, and I don’t mean to pick on them, but I do mean to use them as reference points for the sacrifices that are required to bring certain intellectual properties into the mainstream media.

So what about Marvel? Marvel has made just as many sacrifices and they are still doing it, even with an established universe. 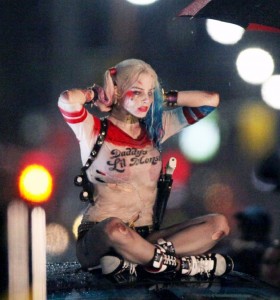 Maybe the best thing you can do is be more realistic with your expectations if you’re a fan of the source material. Or, if you haven’t read any of the comics, just go see the film and enjoy it for what it is. Because I promise you, you will enjoy yourself.

Most of these comic book movies are simply popcorn movies, replacing the summer blockbusters of yesteryear with the same action, but swapping out the gruff, I’m-Having-A-Bad-Day cops with superheroes… or villains, in the case of Suicide Squad.

Go watch the film if you’re interested. If the “reviews” are keeping you away from the theatre, remember to check out the fan reviews, because the critics watch these movies with a different eye.

Most of these comic book movies are simply popcorn movies, replacing the summer blockbusters of yesteryear with the same action, but swapping out the gruff, I’m-Having-A-Bad-Day cops with superheroes… or villains, in the case of Suicide Squad.

Go watch the film if you’re interested. If the “reviews” are keeping you away from the theatre, remember to check out the fan reviews, because the critics watch these movies with a different eye. 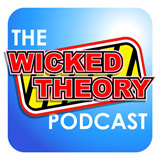 By the way, if you’re interested in a review with Spoilers, I joined The Wicked Theory Podcast for Episode 66 to discuss, Suicide Squad and other geeky things, which is how Bill and Ed ended up getting mentions in this post!

Even the greatest of whales is helpless in the middle of a desert.
Fame and fortune are coming your way.
Courtesy is the password to safety.
More Fortunes >