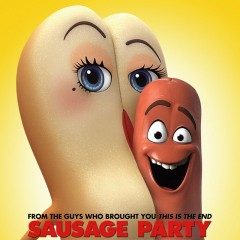 A Special Report by Agent TBD.

Seth Rogan and a host of Apatow comedy regulars dip their toes in the CG animated movie world with Sausage Party, an R-rated comedy that does for groceries what Toy Story did for Toys with much more disturbing results.

As expected, the film is infused with raunchy humor and double entendre that often pushes the line between funny and awkward. Throughout this film I often had to remind myself of the comforting fact that it was not a documentary.

The story of Sausage Party is familiar but incredibly well executed. Frank (Rogan) is a hot dog who along with his girlfriend, a bun named Brenda (Kristen Wiig) and the thousands of other items you can find at your local supermarket (in this case, Shopwell’s) all live in eager anticipation of the moment when one of the “Gods” (shoppers) will pick them off the shelves and take them into the “Great Beyond”.

Through a series of unfortunate events, Frank and Brenda learn the horrible truth about what really lies beyond the checkout counter and attempt to warn the rest of the store. At the outset one might think this movie is a shiny cartoon littered with dick jokes (and don’t get me wrong, there are lots and lots of dick jokes), but there is also an interesting social commentary about the nature of organized religion. 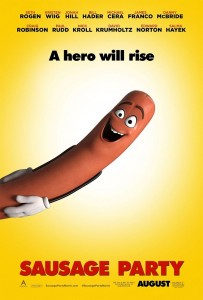 Sausage Party: A Hero Will Rise

For the most part the animation is well-done, but at times can be confusing. There is a moment during the climax involving the two main antagonists, a stockboy named Darren (Paul Rudd) and a bitter, vindictive douche voiced by Nick Kroll (that is not a metaphor. He literally plays a talking douche bottle). During the melee of the final battle the douche attacks Darren. The physics of this altercation are hard to grasp. However, looking back, it is probably best not to dwell on it.

That last statement seems to be a running theme of Sausage Party. It is a hilarious romp that holds up with the best of Rogan’s work. The premise and the setup of this world are kind of creepy. The idea of talking food has been around for a while but this movie almost makes you think twice about the horrors of the can-can sale.

Rating: 3 (out of 5) American Tacos, which is a recommendation.

Agent TBD a.k.a. Edward O’Hare (@EdwardOHareTBD) is a voracious consumer of movies, television, comics and all things geek culture. From time to time he writes his thoughts about such things. He can currently be heard regularly on The Wicked Theory Podcast.

Read the Secret File of technical information and quotes from Sausage Party.

Your moods signal a period of change.
Fame and fortune are coming your way.
Even a broken clock is right two times a day.
More Fortunes >