Bombers, Brak, A Library, and the Mixing of Fandoms…

From battles unseen with bombers and comic book room arguments to a humorous character, a library, and three of the most iconic vehicles of 1980’s television, it’s time to look at some standout pieces from deviantArt. 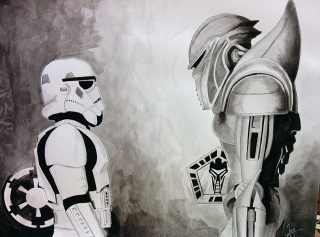 Stormtrooper VS Cylon by JennieLu

But that balance stops at the visual level, because honestly Stormtroopers can’t shoot straight, while Cylons, well, they can shoot very well. Honestly, take out the height advantage, and probably the strength advantage and the only thing the Stroomtrooper might have to his benefit is strength in numbers. But they still can’t hit anything with their blasters!

Seriously, this is visually stunning, but what the title suggests with “VS…” It’s over before it even starts. 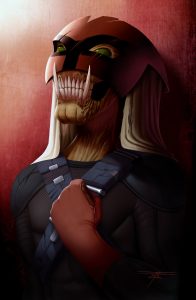 And speaking of shooting… What happens when something that “isn’t animated to explode” is given the treatment of full realistic detail? You get a Brak that is much more menacing than his animated alter-ego on either Space Ghost Coast 2 Coast or The Brak Show.

But you know what, as menacing as this digital representation of Brak by Niveus Diabolus is… That’s what!

Sorry, couldn’t help myself. It’s a Brak thing. But seriously, it’s not often you look at a realistic interpretations of a largely two-dimensional animated character with not only approval, but excitement. But this Brak does just that…

There are a lot of Brak jokes and puns and stories running through my head right now, but I’m going to refrain from all of them, because this is a Brak unto itself. A Brak that stands alone. A Brak that is in need of friendship, which “is like an ointment…” ugh, I did it again. Sorry about that. 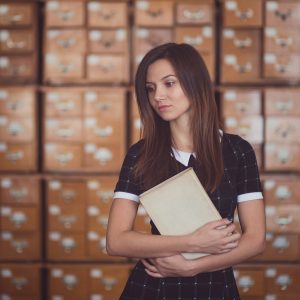 Let’s all go to the library. You remember, that place that used to give you free access to the internet, and before that it was a place to borrow CD’s to rip music from and before that there were these things with pages called books. Anyway, you get the idea, and this photography by Cvettiie1 catches my eye, not because of the title character “Library Girl,” but because of the wall of card catalogs behind where she stands.

Remember card catalogs, and while we’re being library nostalgic, what about the Dewy decimal system? You see that look on her face, it’s because I’m talking about the library as if it’s only a free to the public internet cafe and not a place of great knowledge.

But truthfully, I do like the library. I don’t go nearly enough, but I should, so maybe that look on her face is more dismay that there’s no one else here? Or that for the 12th time today someone asked her what that thing is behind her… Either way, get out to your local library people! 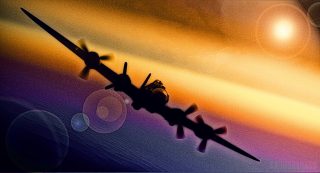 Somewhere Over The Rainbow by izagooner

And while you’re attempting to not make library girl sad, go over to that card catalog and look up Flying Fortress. I don’t know why, but the concept of the flying fortress is something still captures my imagination now, as it did when I was a child.

“Somewhere Over the Rainbow” is one such interpretation of a Flying Fortress, in which I presume it’s coming home, or I would very much like to think it is.

Because, these bombers didn’t usually come through any air battle unscathed. If they lost one prop they were considered lucky. But the one thing that izagooner‘s piece does really well, is create a majesty of the bomber in flight. I’m sure it has as much to do with the color choices, as gold and purple tend to be both royal and majestic, but it could be the outline of the bird itself, with turrets protecting it from all angles.

Similarly, going backwards here, “Flying Fortress” looks like it’s prepared for takeoff. Now, if you don’t look closely, you won’t see the landing gear is down, or maybe you just don’t know that it’s either retracted, down for landing, or malfunctioned…

Anyway, I hope that Rhopunxel’s Flying Fortress fairs well, because between the nostalgic nature of the bomber itself and the pixel art representation, I’m not sure what I’m more intrigued by. 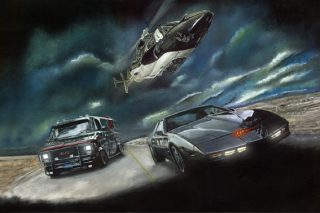 And last but certainly not least we come to one of the finest pieces of art I have ever stumbled across on deviantArt with “Super Pursuit” by solman1.

This may be because of the nostalgia covered glasses I look through when I see the A-Team Van, K.I.T.T. and Airwolf all together in one glorious painting.

Now if we are to take the artist as his word, this “Super Pursuit,” wouldn’t be one I would want to be a part of. The brains of K.I.T.T. and the know-how of the brains in the A-Team Van are a scary enough proposition to get away from, but the speed and firepower of Airwolf is also truly terrifying.

If these three are going in pursuit after one target, I’m sure they’ll obliterate it. How did these three not have some epic crossover back in the 80’s? And from how well done the painting is, I do get pangs of nostalgia to write some fan-fiction, but I think I’ll just let this painting and my imaginations do all the heavy lifting and leave the pages blank.

And so ends this installment of Small Oddities. Take a look at not only the pieces I have featured, but the others that these talents have created. You may find something you like, you may not, but it’s worth a shot.