The Jerusalem Syndrome: My Life As a Reluctant Messiah by Marc Maron is Fantastic 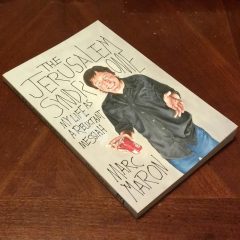 I read and loved Attempting Normal, so much so, that I now own two copies. The paperback that I read and a hardcover copy signed by Marc Maron himself. But once I read that book, I realized that I wanted to read more from Marc, apparently listening twice weekly to WTF with Marc Maron just isn’t enough, so I picked up a copy of The Jerusalem Syndrome: My Life As a Reluctant Messiah and it did not disappoint.

Written back in 2001, the jokes, diatribes, and issues that Marc dealt with during the period of time predating this book’s publishing all appear to still hold validity to this day.

A stage show was created from this book, which I have not seen, but will look into, because if you’ve heard anything of Marc Maron, it’s hard not to read this book without hearing him reading it to you as an inner monologue. In fact, that might be a better way to read, but I’m sure it still holds up otherwise.

The back cover states, “The Jerusalem Syndrome is a genuine psychological phenomenon that often strikes visitors to the Holy Land–the delusion that they are suddenly direct vessels for the voice of God. Marc Maron seems to have a distinctly American version of the Jerusalem Syndrome, which has led him on a lifelong quest for religious significance and revelation in the most unlikely of places.” 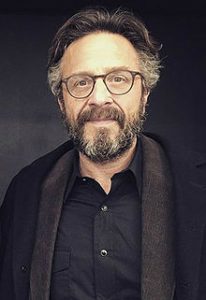 But it is more than that. There is a through line with “The Jerusalem Syndrome,” but it also shows Marc’s growth over a period of time in his own words. This isn’t his final autobiography, but it seems to reveal a very honest and emotional part of Marc Maron that usually can be encountered during the introduction to one of his podcasts.

But there’s some philosophy and observation in the book, too. Things like:

“I took a course in existentialism during which, with the help of my professor, I erased myself completely and had to rebuild from scratch.”

“It was time for me to have a go at my own life. I was tired of always assuming that everyone but myself possessed secret information; like some common code of understanding, some idea that tethered their soul and enabled them to get through life with some degree of grace, as opposed to the panic-ridden, angry, tumbling down the pipe that I had experienced.”

“I saw Hollywood as a mystical Jewish city. It was like the anti-Jerusalem. Think about it. It was built on the same idea as the real Jerusalem. A small group of Jewish kings went into the desert with a crew of crack Jewish writers and created the kabala of the American myth. The movies.”

“I was living in a comic book, but I had no special powers.”

“I started to believe that was really the core of my spirituality, American spirituality, brand loyalty. It requires an almost religious faith. You don’t realize how strong that faith is or how deep it runs until it is tested.” 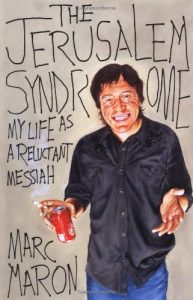 “Babies are like cocaine to grandparents. The need comes from a deep place. They want one more opportunity to love something that hasn’t disappointed them yet.”

All of these things Marc wrote, and eventually performed, are bigger than the whole. It’s a part of his comedy and his personality to not only entertain, but to leave you with more questions when you’re done than you had when you started.

When I reviewed more recent book, Attempting Normal, I called him “the Podcasting Philosophizer,” and this book, however you take it, does nothing to diminish that statement. In fact, between his podcast and the two books, he does nothing but make that a more accurate statement.

I understand Marc Maron isn’t for everyone, but he is for me, and if he is for you, you need to pick up The Jerusalem Syndrome: My Life As a Reluctant Messiah.

Read the Secret File of technical information and quotes from The Jerusalem Syndrome: My Life As a Reluctant Messiah by Marc Maron.

Even the greatest of whales is helpless in the middle of a desert.
Let’s finish this up now, someone is waiting for you on that.
A difference, to be a difference, must make a difference.
More Fortunes >