Antitrust still presents Argument that is Anything but Binary 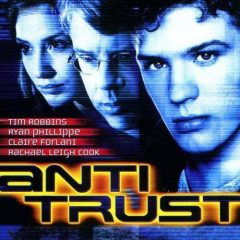 There is something equally timeless and out of date about the 2001 film “Antitrust.” Despite this or because of it, the thriller is still interesting to watch and enjoy.

As the fictional tech billionaire in the film, Gary Winston loves to say that things are binary, and this film fits that description. Sure, it is fiction, but at its core there is a discussion that takes place all the time under the surface: when it comes to software, you’re either open source or you’re not.

The two main characters are the personification of each side of the argument. Ryan Phillippe’s Milo Hoffman is pro-open source. His character is one that we’ve seen rise to wealth in the years since the film premiered, with technologies and code paving their way.

He’s young, he’s idealistic, and he wants to “make his mark on the world.” Though, in this film he’s a lost soul, out of time and touch, because today, this movie would have ended there. Friends typically don’t let other friends work for big corporations if they have venture capitalists opening their wallets for them, which is what Milo walked away from.

On the other side of that argument is Tim Robbins’ character, Gary Winston. Robbins definitely took his cues from a caricature of Bill Gates given his range of passion and child-like qualities, practically eating potato chips and being a kid in a technological candy store to acting as the Chess Master, knowing the game of marketing through and through. He even borrows from Jobs in the way his character conducts his presentations. 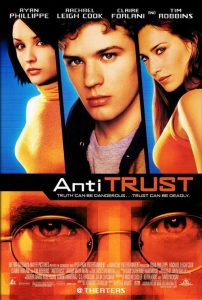 Another realistic piece of Robbin’s character is Winston’s unstable nature. Having read about both Gates and Jobs, I can tell you that is part and parcel to what made them successes. They were obsessively hard on themselves and pushed those lofty expectations on those who were around them.

Jobs may be in the character, but it’s Gates who seems to get the larger piece of the caricature, and he’s even mentioned in the film. When Winston is showing Milo around, Milo asks “Doesn’t Bill Gates have something like that?” to which Winston replies “Bill who?”

But look at the oratory from Winston for further evidence of Bill Gates’ influence on the film:

“This business is a living organism, multiplying constantly, surrounded by predators. There’s no rule for idle time or second guessing. New discovery was made hourly. New ideas are ready to be devoured and redefined. This business is binary. You are a one or a zero. Alive or dead. There is no second place.”

And this exchange with one of the lawyers: 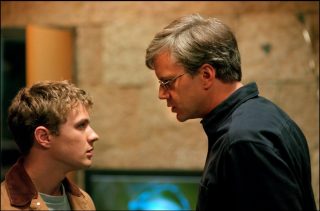 I’m sure the language may change based on the speaker, but are these not things we could have heard from Gates or Jobs? I tend to believe that a few of them are more on the nose than you would think.

Now, that we know the main to players, let’s look into the technology at hand, that one big piece that Winston needs Milo to complete: SYNAPSE.

And while Synapse may have been quite the eye-opening concept in 2001, it’s just not plausible in today’s technological environment. That kind of connectivity only exists within the closed system of Apple products and, even then, we’re still using a litany of platforms to disseminate information in any form.

We are all connected, but it is across platforms, not on just one. Personally, I’m not sure it will change anytime soon.

Back to the film as a whole. It’s admittedly not the best movie. IMDB has it rated at 6.1/10, but it is entertaining. It’s a thriller and as such the drama builds from the setup of act one to the turn in act two and the resolution in act three.

Personally, though, I have an idea where it should go. I think an Antitrust 2 would be interesting to see. What are Milo and Skullbocks up to now and how would Gary Winston get out of his grand jury trial to seek revenge on Milo? That’s how the sequel can or even should be set up.

But the argument at the core of this film – open source versus not – will remain relevant in the years to come as technology advances and we continue to wrestle with that. In the years since its 2001 release that argument has had its ebbs and flows, and I firmly believe that will continue to be the case.

If you’re interested, I encourage you to revisit Antitrust or take a look at it for the first time. It’s floating around on streaming services and maybe you’ll enjoy yourself, or at the very least you can cringe at the technological leaps we’ve made physically. After all, we aren’t using CDs like we used to.

Read the Secret File of technical information and quotes from Antitrust.

A difference, to be a difference, must make a difference.
You are interested in higher education, whether material or spiritual.
Whoever wants to reach a distant goal must take small steps.
More Fortunes >