If John Wick was the starting bell for a new breed of action film, then The Hitman’s Bodyguard is John Wick’s humorous cousin. And for all the action sequences within the film, it is the onscreen chemistry of its two leads, Samuel L. Jackson and Ryan Reynolds, that holds it together.

I’m not sure that this movie is for everyone, but for those who enjoy laughs with their action and a side of gore, this film is worth repeat viewings. 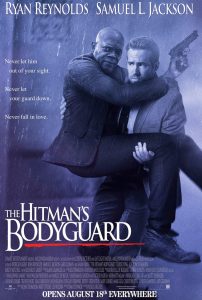 The plot is simple; it’s something that was done with 2006’s “17 Blocks” with Bruce Willis and Mos Def in which a witness in a critical case needs to get to the courthouse. In the current film, the witness/hitman is Darius Kincaid, played by Jackson, who basically plays himself. The man in charge with getting him to the courthouse on time is bodyguard Michael Bryce, played by Ryan Reynolds.

This is a spoiler free review, but in effect the ending doesn’t matter. For Kincaid and Bryce it is the journey that matters most. They play the odd couple so well, it would be very interesting to see them actually play the odd couple; Bryce is Felix and Kincaid is Oscar.

Sure, the action sequences are good, but if they had spent more time talking in the car I would have had no issue with it. Again, the chemistry Reynolds and Jackson employ onscreen together is some of the best you’ll see. I’m going to be sure to get the Blu-Ray as I am convinced that the outtakes and the verbally sparring between our two main characters that didn’t make the final cut are still worth seeing.

I know that given the fact that Reynolds is starring in this film makes this an all too easy comparison, but this is this year’s Deadpool. The violence, the humor, it’s all there. And yes, I truly do want to see more of these characters together. As I’m sure they probably would, too.

The chemistry, and I’ll keep going back to the word, makes it seem like they had as much fun making the movie as any other film in both of their illustrious careers, which is saying something. And the fun they had making the film, shows through in the final cut. 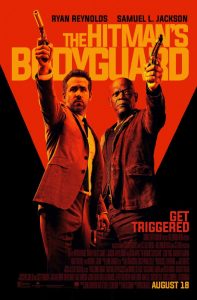 Back to my original point about this being John Wick with humor: I could anticipate seeing one movie, like this one, a year, if it’s done this well.I could anticipate seeing one movie like this each year and if it’s done well, it doesn’t have to be Jackson and Reynolds every time. Now I don’t expect it’ll kill at the box office because it is dropping the same weekend as Netflix’s anticipated team up The Defenders, but I suspect this will do very well once it comes to rental and streaming services.

It’s no secret why these two talented actors work well together as they work well in basically everything they do, and I don’t see this film as an exception. In fact, it does nothing but prove the rule — Jackson and Reynolds are on top of their game, and it all shows in The Hitman’s Bodyguard. Go see it!

Read the Secret File of technical information and quotes from The Hitman’s Bodyguard.

You are interested in higher education, whether material or spiritual.
Let’s finish this up now, someone is waiting for you on that.
Fame and fortune are coming your way.
More Fortunes >