Down on Paradise Road: American Graffiti is a Timeless Period Piece of Cars, Music, and Youth

American Graffiti is from another time, about another era, and it is still a magnificent work of art.

George Lucas got his start with and was greatly inspired by art films… and cars. His love for those, as well as music, are all well-woven into the fabric of this piece of art. And in the ways that it hasn’t aged well – as far as the look and feel of the film, as well as the way the story unfolds – it has a timeless quality about youth and the unknown: love, dreams, and self-purpose. 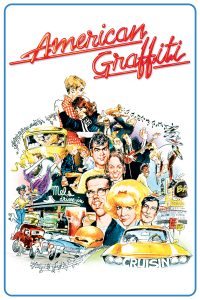 When we’re young, we all want to know the answers, even if we think we know them all. Some of us want to grow up and some of us don’t. Usually, regardless of the path you choose, there are always the paths you didn’t take.

But before I get to philosophical or maybe because I already have, let’s look at the film itself.

The plot is simple; “a couple of high school grads spending one final night cruising the strip with their buddies before they go off to college.” The two buddies are Curt, played by Richard Dreyfuss and Steve played by Ron (“Ronny” in the credits) Howard. Their friends include John Milner, Terry the Toad, Steve’s girlfriend Laurie, Debbie, Carol, and Wolfman Jack, who DJs the soundtrack throughout the film on XERB.

“Sneakin’ around with the Wolfman, baby. This is gonna strike a raw nerve, Mama. Here’s The Platters.” – Wolfman Jack

It’s partly a music video set to a car film and partly a coming of age tale. It is a film in three parts: one part music, one part cars, and one part characters. And with the first two being part of a bygone era, it’s only with the third that this film stands the test of time.

The soundtrack that Wolfman Jack spins is classic rock ’n’ roll. Bill Haley & His Comets, Del Shannon, Chuck Berry, The Platters, The Crickets, Fats Domino, The Skyliners, The Beach Boys, and many, many more offer a soundtrack worthy of inclusion on the best of soundtrack lists, if not the very top itself. 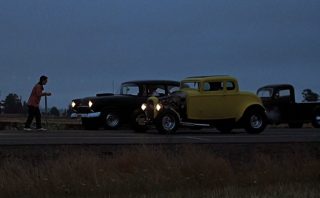 The Classic Cars of American Graffiti

The cars are classics as well. The Deuce Coupe driven by John, the 1955 Chevrolet driven by Bob Falfa (played by Harrison Ford) who’s looking to take down John’s #1 spot on the strip, and the 1958 Chevy Impala driven by Steve are all museum worthy at this time. Even Curt’s old Citroën 2CV and Terry’s Vespa have a charm to themselves. All of this is important, because these cars are as much a part of the story as anything else.

As for the characters, they’re young and they are living, though not all are living up to their own inner selves. There will always be teens looking for trouble or love, youths struggling with the idea of what happens when school ends and the real world begins, and relationships of all kinds changing with the passage of days. When you’re young, all of these things move at such a breakneck speed.

In fact, there are characters on both sides of the speed limit. Curt and Steve are trying to slow it down, while Terry is trying to speed it up. Meanwhile, despite their need for speed, John and Bob are just driving in stride, and they’re enjoying the ride at that.

Meanwhile, the three female characters that actually have development all fit into one of those places. Laurie doesn’t know what she wants. She just knows that she wants life to stop. Carol, who rides around for a good part of the movie with the much-older-than-her John, is looking to speed up life. Finally, Debbie, who spends her evening with Terry, is just along for the ride. 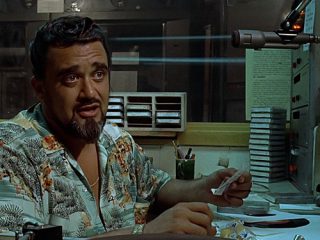 Both Steve and Wolfman say similar things to Curt at different times in the movie. Early on, one of the first conversations in the film is Steve telling Curt, “We’re finally getting out of this turkey town, and now you wanna crawl back into your cell, right? You wanna end up like John? You just can’t stay 17 forever.” Later in the film, Wolfman tells Curt, “The Wolfman is everywhere. I can’t talk for the Wolfman, but I can tell you one thing. If the Wolfman was here, he’d say: ‘Get your ass in gear!’ The Wolfman comes in here occasionally bringing tapes, you know, to check up on me, what-not. And the places he talks about that he’s been. The things he’s seen. There’s a great big beautiful world out there. And here I sit sucking on popsicles.”

And while those two conversations happen at opposite ends of the film, they’re relevant to this one night, this one moment in time.

At any given point in their lives, everyone has been at Mel’s Drive-In and surrounded by those who are either keeping the pace, trying to slow it down, or speed it up. I assure you, those things aren’t restricted to the younger generation. You could probably find that in any place, at any time – all you have to do is look around.

“You’re the most beautiful, exciting thing I’ve ever seen in my life and I don’t know anything about you.” – Curt Henderson

And despite the age of the music and the nostalgia of the cars, this 1973 movie about the last day of the summer of ’62 manages to capture a slice of that youth in all of us. The main characters are all searching for something: love, excitement, trouble, whatever it is. They ultimately seek the answers to life, while having the answer with them the whole time. The answer to life is in the living of it.

Milner gets pulled over

Read the Secret File of technical information and quotes from American Graffiti.

Even the greatest of whales is helpless in the middle of a desert.
Whoever wants to reach a distant goal must take small steps.
Even a broken clock is right two times a day.
More Fortunes >