Remember Duelist the short-lived Wizards of the Coast magazine that was mainly focused on Magic: The Gathering? Yes, back in the day, I was a subscriber. And while the magazine ceases to exist, almost 20 years after it’s demise I feel it’s time to look back. Sure I’m aware it was a propaganda mechanism for Wizards of the Coast, but at the beginning for a Magic player like myself, who at that time was completely under the game’s spell, it was a fantastic.

So what enamored me with it? Well, I was in my early teens, and Magic seemed like much more than just a hobby. Back then, I was still dreaming about what it would be like to go Pro, but it wasn’t just about strategy. So what was it about?

The Duelist or simply Duelist, as it was renamed, was started by Wizards of the Coast (WOTC) in the Fall of 1993 to promote Magic: The Gathering, but it soon became more of a quarterly collectible card gaming magazine featuring other WOTC card games. 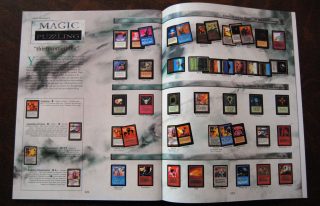 Focusing on the Magic: The Gathering content first, there were plenty of regularly recurring articles. House Rules, which included numerous game variations for Magic: The Gathering within each issue, Library of Leng which dove into the mythos of a card or two, focusing on the character or location on the card rather than it’s playability. Lost in the Shuffle, a must read companion for any aspiring game-designer written by the creator of Magic, Richard Garfield, himself. Excuse Me, Mr. Suitcase? Which focused on deckbuilding and card strategum, Murk Dwellers which focused on the game within the game explaining details of play in minute detail. Magic: The Puzzling, was just that, puzzles in which gameplay scenarios were laid out and you had to come up with the solution. All of that plus Artist Interviews, plenty of FAQs, set release previews, and behind the scenes articles.

What about it exactly? I’ll tell you with examples. There are quite a few highlights from the limited library that remains in my collection, which are issues #3 through #14. 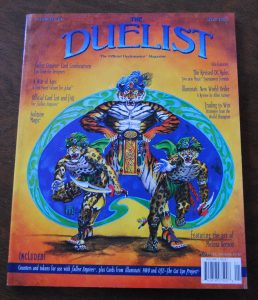 “The History of Fallen Empires” from issue #3, is a beautifully written article about “The civilizations struggle against enemy onslaught and internal uprising in Magic’s latest expansion.” And although I fell in love with the Fallen Empires as a set for other reasons, this didn’t hurt at all.

“The Ten Mental Locks of Magic” from issue #4, which dives into some huge myths within the game such as “Rare cards are superior,” “A card has one use,” “I can’t play negative cards on myself,” and more myths that experienced players have debunked with time, that newer players still need to understand to this day.

“Mana Maze Solitaire Rules” also from issue #4, is an article about how to play a solitaire style of Magic that I’ve never tried, but one that I’ve always meant to.

“Wizard’s Chess” from issue #4, a deck building variation based upon the King’s game, which is just one variation of the two I’m aware of for chess Magic: The Gathering style.

“Bluffing: It’s Not Just Luck” from issue #5, which is something that can only be done with the right combination of a poker face and a proper deck build.

“Electrons Are Your Friend” also from issue #5, which is an extremely dated look at USENET groups and other sites to not only contact Wizards of the Coast, but other Magic players as a resource in deckbuilding and strategy on the World Wide Web.

“How Magic Was Born,” from issue #6 which is a wonderful story of the origins of the game itself. 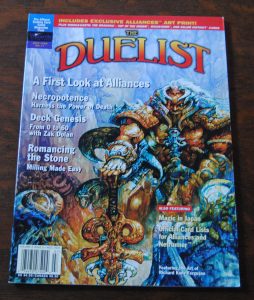 “Baron Sengir: The Evolution of a Magic Card” from issue #7, which is one of the more in-depth chronicalings of the research and development processes for any card that was written in the Duelist’s run.

“Mastering Multiplayer Magic” from issue #8, which is something I’ve never been able to crack. There are just some parts of my deckbuilding strategies, even when building a multiplayer deck that have me at best a player who will win as much as I lose.

“The Making of Alliances” from issue #11, which is by far one of my other favorite sets, so the glimpse into how it came to be, is always a little more personal for me.

“Erhnageddon and Erhnam’n Burn ‘Em” from issue #13, an article about one of my favorite deck strategies, which was only eclipsed by the power of the Squatageddon deck, a variation of the same theme, but with Orcish Squatters.

“The Impact of Alliances” also from issue #13, because again, it is one of my favorite Magic set of all time!

“Opening New Worlds: What’s white, blue, black, red, and green, and is played in more than forty countries on six continents? (Hint: It comes in nine languages.)” from issue #14 is a breathtaking story of the globalization of Magic: The Gathering. 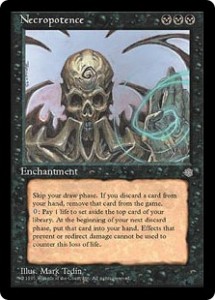 But aside from paging through and finding the highlight articles, there are also some changes that occur as you roll through the issues. A prime example being that in issue #6 the preliminary Ice Age Top 10 list did not include Necropotence, which was highly abused and used during its time and even since. The follow up article on the “Power of Necropotence” didn’t get published until issue #11.

Also, watching Arena, now Friday Night Magic take shape, the World Championships evolution into the Pro Tour as we know it. And the cards bouncing in and out of the banned and restricted lists, the card Errata changes, as well as the creation of Type I and Type II tournaments, are all interesting in terms of the evolution of the professional and amateur game.

There is no doubt that a magazine such as Duelist would have a hard time surviving against the internet of today. It was created at the right time, and I think it bowed out at the right time to. It’s a snapshot of what the game was, and how it came to be. And if you get the chance to page through one, I would recommend it.

After all these years, I still page through them occasionally. I’m not saying I’m immediately transported back in time, but there is a very high nostalgia value to my library of Duelist magazines. And I’ve been happy to share that nostalgic trip with you all.

What are your memories of Duelist? Did you have a subscription? What are your favorite articles that you either remember or that remain within your library?

Good clothes open many doors. Go Shopping.
Things are turning for the bright side.
You are interested in higher education, whether material or spiritual.
More Fortunes >