If you could get in a time machine and ask me in my 7-year old wisdom, what the best album of all time was, I would have easily answered Teenage Mutant Ninja Turtles “Coming Out of Our Shells,” without hesitation. Seriously, the album was my jam back in the day. 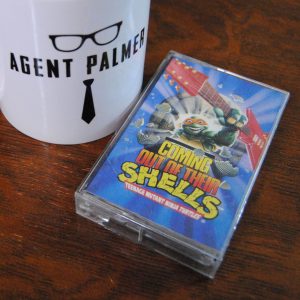 Though much lamented on the internet with any google search for “Coming Out of Our Shells” now, I view this gem very differently. Let’s be honest here, I was 7 when this was released and it was my jam!

As a kid, this was literally marketed to and for me! I still have my original tape cassette, but when I found out it had made its way to streaming services Spotify and Amazon Prime Music, I decided to go back down the sewer hole!

I know there are parts that aren’t good, but I can’t hate this album. And now that it’s more widely available to me than my cassette tape (yes I still have a cassette player and a walkman, but the tape’s a bit warped from overplay), I’ll be putting it into the streaming rotation!

But aside from the negativity, and moving past my nostalgia, what was this album, where did it come from and why?

The last question is much easier to answer. It was a marketing ploy bankrolled by Pizza Hut! It featured a “Tour”, the first concert was a Pay-Per-View live broadcast; it had a VHS tape of the aforementioned PPV concert, and the soundtrack was released on cassette. The Turtles also appeared on Live! With Regis and Kathie Lee, Larry King Live, and The Oprah Winfrey Show; a veritable marketing frenzy of free publicity if you will. 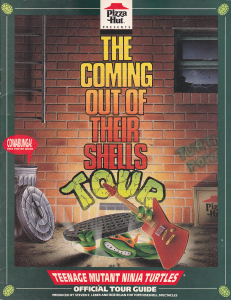 Where did it come from? Well, some marketing genius at Pizza Hut, thought that it would sell pizzas. Are there numbers? Maybe in some long lost marketing magazine or Pizza Hut Annual Report, but I can’t find anything on the internet about them.

What was it? Well, it was what it was. The Teenage Mutant Ninja Turtles, along with April and Splinter, put down their weapons and picked up instruments and microphones to make music.

Now, in the pay-per-view concert and on the VHS, Shredder had a song called “I Hate Music” which I heard for the first time looking in it on YouTube.

But let’s move past the concert, the tour, and the video. My nostalgia has nothing to do with the live concert, nor the video, which isn’t as good as the soundtrack in production value. And that’s basically because even in the late 80’s or early 1990 when this would have been recorded, there was still something polished you got out of the studio, you couldn’t get live, especially with a novelty act, like this.

Now, it’s worth noting that this album was the second big thing the Turtles released in 1990. Let the irony commence.

Seriously, though, there is a very large irony to me (in hindsight) surrounding Pizza Hut bankrolling this whole thing. Do you remember what also happened in 1990? Teenage Mutant Ninja Turtles: The Movie was released, and those live-action turtles in the movie had a sponsorship/product placement with Dominos because at the beginning of the movie it is Dominos not Pizza Hut who delivers the Turtles their favorite food. 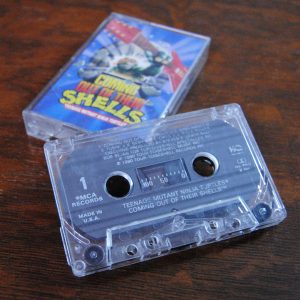 That’s right! The Teenage Mutant Ninja Turtles were part of a little Pizza War in 1990, and they were on both sides of the biggest Pizza chain battle! Both sides!

So, let me quickly break down the ten tracks on this album.

Coming Out of Our Shells
“When there’s music inside of you, someday you know that it’s gonna come through.” and for the Ninja Turtles, this is the reason that they’re coming out of their shells. It’s a classic late 80’s, early 90’s acoustic rock song.

Sing About It
Again, sticking with the “why are they doing this album” motif, this song is literally about them singing. It does have a positive spin, because this was marketed towards kids, “when you’re down, you don’t want no one around, draggin’ your shell all over town” then, just sing about it, and you’ll be happier. Apparently, the Turtles want you to think positive, be positive and singing will help.

Tubin’
Let’s move to track three, where “surfin subterranean” is the refrain, about surfing in the sewers. It’s got a hip-hop/rock breakdown, towards the end, which is also very of the time. And thankfully that time has passed.

Skipping Stones: Splinter’s Song
I know this is Splinter’s song, I mean it’s credited as his song in the liner notes, but I always thought it was Raphael’s song. Why you ask? Well, “the search for happiness reaching for peace of mind” is truly something that Splinter would tell his disciples as a lesson, but perhaps since Raph goes off on his own during the movie from earlier in the year prior to this album’s release, I always mistook this song as an extension of Raph’s “sensitive side” from the film.

Pizza Power
Remember, at the beginning of this post, how I explained that this whole album was bankrolled by Pizza Hut? Well, this wouldn’t be subliminal messaging as they never actually say Pizza Hut in the song, but since that is the main food product in your name and it is synonymously related to the Teenage Mutant Ninja Turtles in both the cartoons and the movies of the era, how could you not write this little ditty for them? I mean the lyric “Pizza power is the thing that keeps us going,” is incomplete synchronicity between the Teenage Mutant Ninja Turtles and their bankrolling overlords at Pizza Hut!

Walk Straight
Now, if we’re going to target kids we need to tell them not to do drugs. At least this is how I imagine that it was pitched from the marketers to the songwriting team. There’s no flaw in marketing there, it’s what you did in the 90’s and if you had 10 tracks, as this album has, you’d clearly want to have one fairly straight-laced anti-drug song.

No Treaties
This is probably the only song on the album that lacks the camp of the Ninja Turtles theme throughout the album and could have actually worked as a radio single or arena anthem of the time in small towns that hadn’t yet been introduced to the influence of Seattle’s grunge scene. It’s really just a straightforward rock song from the late 80’s. Aside from the “take that, Shredder” line right before the solo, it kinda stands on its own. Like a long-lost sequel to Black Sabbath’s War Pigs.

Cowabunga
Talk about a trainwreck of early 90’s hip-hop, this is just Michelangelo rapping over a beat with the rest of the Turtles backing him up with a refrain of “Cowabunga” every so often, as he introduces the fellow turtles and himself. It’s too hard to hear his descriptions of the turtles and not hear the “borrowed” personality traits taken directly from the animated series intro.

“Raphael is cool but rude” doesn’t actually have a parallel in the rap, just that he’s the first one “who made the music scene.”

I’ll say this, at least they’re consistent in their level of camp.

April Ballad: April’s Song
Every album needs a ballad, right? And if you’re going to let Sensei Splinter sing a song, you have to give April the mic at least once. But true to the cartoon, with April as the strong female lead(who doubles as the damsel in distress), this song may be April’s solo but it really just serves as a long intro into the last song with a refrain of “That’s what they told me, you can Count on Us.” 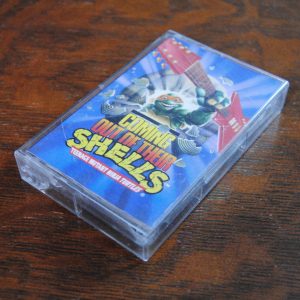 Teenage Mutant Ninja Turtles Coming Out Of Their Shells

Can I just say, that it’s very of the time to have anthems with a solid base of acoustic guitars? Specifically, the first and last tracks. And, it’s coming back into mainstream music, too. Not that I listen to mainstream music very often. Since I rediscovered this album, I’ve been listening to it a lot. Which is why I’m not that embarrassed to say that I was listening to this album for a while before I decided to write about it.

Now, in hindsight, all of this (including the Shredder song) I mentioned earlier were all part of a larger stage show, with a plot. Thankfully, my nostalgia is only based on the music, and not the video.

I had the cassette, as I mentioned, and I still do. But again it’s warped from over play and I’m not ashamed that when I discovered this album on streaming services, I still remembered about 98% of the lyrics. And not after the first listen, but during the first listen! This album is literally embedded in my subconsciousness.

I know it’s not that great of an album, and if this post is your first introduction to it, you probably think it’s campy. Perhaps you are more harsh and think it’s crap. But through the filter of my younger self, the nostalgia value of this album makes it enjoyable, despite how much I could technically or sonically rip apart this piece of marketing, which is what it is.

Good clothes open many doors. Go Shopping.
Even a broken clock is right two times a day.
The path of life shall lead upwards for you.
More Fortunes >