Fanboys is the Nerdy Road Trip Comedy You’re Looking For… 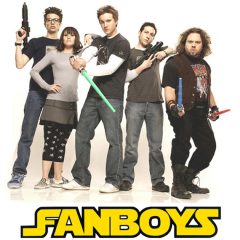 Fanboys is a film about Star Wars, and a cross-country road trip to see Star Wars Episode I before anyone else, by breaking into Skywalker Ranch.

It’s about four fanboys and one fangirl, but it’s also about fandom and friendship.

The cast is fantastic; Sam Huntington as Eric Bottler, Chris Marquette as Linus, Dan Fogler as Hutch, Jay Baruchel as Windows, and Kristen Bell as Zoe. While Kristen Bell is brilliant, despite being tired from shooting her breakout role as Veronica Mars during the week and completing Fanboys on the weekend, it is the cameos that really take the cake, yet it’s so much more than that, too.

Ethan Suplee as Harry Knowles, the creator of Ain’t it Cool News joins the laundry list of cameos that includes Will Forte, Craig Robinson, Kevin Smith, Jason Mewes, Danny McBride, Ray Park (best known as Darth Maul), Danny Trejo as “The Chief,” Billy Dee Williams as Judge Reinhold, Carrie Fisher as a nurse, and William Shatner as the best role he’s suited to play; himself. They all add to a great foundation and increase the overall comedic value of the film because, like the main cast, they all go for it.

But back to the main four players, who plan to “storm the ranch or die trying” to see Star Wars: The Phantom Menace before anyone else. After being sidetracked with a detour into Iowa to the home of the future birthplace of Captain James T. Kirk, and with a few hours of hard time in jail, Zoe joins back up with the crew for the glorious third act.

It may be hard to separate this film from Star Wars because it is such a loving tribute to the franchise. But Fanboys goes further to address the question of fandom and the search for identity throughout the film’s many pop culture references, which go well beyond the worlds of George Lucas. Literally, even if you aren’t a Star Wars fan, there are still references in this film you will enjoy.

That’s not by accident. The screenplay was written by Adam F. Goldberg, creator of The Goldbergs, and Ernest Cline, who wrote a tribute to all things fanboys, across multiple genres with his best-selling novel, Ready Player One. 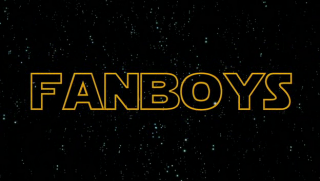 The film starts with a scroll, because of course it would. The scroll reads:

The year is 1998 and it is a period of galactic civil war. Scratch that. There’s no civil war. That would be crazy. However, the past fifteen years have been a dark time for Star Wars fans.

But there is hope. A new Star Wars film is on the horizon. In 199 days, 3 hours, 33 minutes and 29 seconds the most anticipated movie of all time will be released.

In the remote state of Ohio, two best friends and lifelong Star Wars fans have drifted apart. Little do they know that on Halloween night, their paths will cross again…

Ever wonder why these words are flying? Maybe aliens in another galaxy will one day read this and think WTF?

sent from my iPhone.

That’s it. That’s the plot. It’s very much a road trip movie. And what would a road trip movie be without a great soundtrack? Well, it wouldn’t really be a good one, would it? No worries there.

The musical score for the film was all created by Mark Mothersbaugh, the vocalist and a founding member of Devo. But despite his brilliance the soundtrack overtakes the score with tracks from Rush, Chumbawumba, Smashing Pumpkins, Spacehog, and The Presidents of The United States of America among others.

But more than that, one of its more poignant subtexts is on display shortly after the scroll, as Eric Bottler, is reunited with his friends; Hutch, Windows, and Linus, his former best friend, after three years. 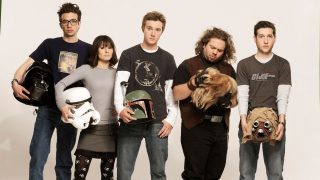 Bottler has grown up. In fact, he’s “the only one who has,” according to him. The tension between Bottler and Linus isn’t truly because Eric bailed on their plan to become the next great thing in comics but because he bailed on his friends themselves. While Eric did the responsible thing and took a job in the family business, he left behind childish things and his childhood, as well as his childhood friends.

The subtext here, in that Eric later becomes Han in “carbonite freeze,” is that he isn’t necessarily happy that he grew up. And therein lies the rub.

When is it time to give up one’s fandom? Or, even more to the point, does one have to give their fandom up to grow up?

When the film approaches this subject as Hutch, Windows, and Linus attempt to defrost Eric from his carbonite status, Hutch says that everyone needs to find their “Death Star.”

“You gotta find your Death Star.”

To quote Hutch further, in explanation, “Greatest deed Luke Skywalker ever did was take down the Death Star, right? As far as I’m concerned, that’s what everybody needs. You need that one bad-ass thing that lets you live on forever, you know.” 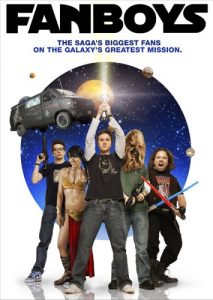 And that’s true. We’re all looking for meaning, if not some kind of lasting legacy. So, where does fandom come into this? Fandom is sometimes the key to finding that meaning for some people. Most movie franchises, like Star Wars, have their own mythology, and thusly, as religion does for others, this mythology can help those who believe in it to find meaning in their own lives.

But times have changed. Fandom is no longer the “geek” or “nerd” crutch that it used to be, thanks in part to the proliferation of Marvel, Star Wars, Lord of the Rings, Game of Thrones, Harry Potter, and a host of other blockbuster franchises that have crossed over into the mainstream.

But I digress. Our five heroes all fall in and out of being Star Wars caricatures; Hutch is at times both Han and Chewy or R2-D2, Linus is either Obi Wan or Luke, Bottler is either Han or Luke, Windows is either Chewy or C-3PO, and Zoe is Princess Leia in all her tenacious glory.

Those roles change, and – to project a bit here – if we were to follow these characters, the list of Star Wars roles they would take on would probably just increase. That’s how it is. In all of our groups, regardless of fandom, the characters we look up to wash over us as the situation demands. We are all capable of being the scruffy-nerf herder, the farmboy, the Jedi master, or the princess, to name a few.

This film is very much a love letter to Star Wars, obvious fandom links aside. With that comes the discussions over the minutiae that exist within every fandom: the Luke-and-Leia argument; the Boba Fett argument; and, of course, the fandoms that revere each other, sometimes with great respect, other times without. It’s no surprise that at some point during Fanboys that we debate the never-ending Star Wars vs. Star Trek friction, which is similar to the ongoing DC vs. Marvel arguments.

The What If Question

And that ending… We’ve all been there, right?

It’s a question that all fans within any fandom ask whenever something new arrives on the horizon: “What if the movie sucks?” It’s poignant, in that all fans of any fandom inherently take the good with the bad.

It’s a fun film, it really is. To me, as a Star Wars fan, I appreciate all the little things that are direct and even indirect nods to the original franchise that we all fell in love with. But at the end of the day, this is a film that is best watched with a group of friends. There exist some films you can watch by yourself, but are much better if experienced in a group and this is one of them.

May the Force be with you!

Read the Secret File of technical information and quotes from Fanboys.

Let’s finish this up now, someone is waiting for you on that.
Even the greatest of whales is helpless in the middle of a desert.
You are interested in higher education, whether material or spiritual.
More Fortunes >