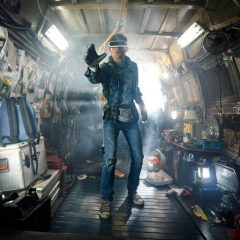 Ready Player One is an amazing film. It’s fun, it’s filled with pop culture references, and it follows the book as much as a film can. But it’s not the book, which does not surprise me, and you should read the book, and you should also go see the film. What follows in this review is just the old man rant, that I had to get out of my system, and one that is kinda pointless because I did love the film.

Now, I attempted to go into this film with an open mind, which is how you need to view such things as movies based on books that you love.

I had gushed over Ernest Cline’s Ready Player One, the best-selling book, a year and a half ago, and now it was time to see that book come to life at the direction of Steven Spielberg himself.

And I sat down and thoroughly enjoyed myself. Every element of pop culture referential goodness washed over me as Parzival, Art3mis, Aech, Shoto, and Daito progressed through Halliday’s hunt.

For those who didn’t read the book, Ready Player One is about James Halliday, creator of the OASIS, an online Virtual Reality world, whereupon his death, Halliday announces that control of the OASIS will be given to whoever finds his Easter Egg. Such is the plot of the book upon which it is based, as well.

Here’s the thing. As much as I was 18 months or more from having finished the last page of the book, it is still ingrained in my skull, so I did my best to clear it from my head and watch the film with fresh eyes and an open mind. 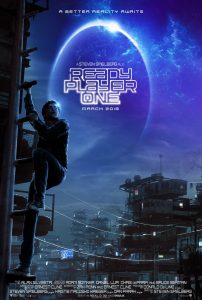 And I did. Except that when the last credit rolled, I pulled out my phone, called my girlfriend who has my copy (I leant it to her, so she could read it), and then proceeded to complain about all of the differences between the book and the film, all the while taking time to state and re-state that I really did enjoy the film.

It was everything I could have expected. It was a pop culture bonanza, the story of the Gunters or “Egg Hunters” looking for Halliday’s Easter Egg, and their battle with IOI, the evil corporation that is also looking for the same thing, but for much different reasons.

It is an amazing theatrical film, and it has Spielberg’s fingerprints all over it, and yet, I couldn’t help but compare it to the original source material, the book by Ernest Cline. I just couldn’t remove the memory of my favorite parts, and how they weren’t in the film.

And yet, it’s all there. There’s nothing overtly wrong with the plot, it doesn’t stray that far from the source, and although the pop culture references are different, they’re all still there. I mean, a swap out from WarGames to The Shining as a referential movie plot point doesn’t change the film at all. Except, that at first, I was fixated on this change after the film, even though I do understand why it was made. I loved the fact that WarGames played the role it did in the book, and it is one of my favorite films.

That’s the thing about this. Those who read the book first, and especially those who loved the book, will have done so for their own reasons, beyond the plot, most are hanging on to a few specific mentions of their own favorite pop culture things that occur within the pages Ernest Cline wrote, and to the same extent, while the references change, it’s not hard to love this movie for the same reasons.

This is one of the problems that occur when something goes from page to screen, especially when the pages are beloved.

But, when I tell that part of my brain to shut the hell up, I will be the first to admit that Ready Player One the film is a wonderful pop culture experience that holds true, for the most part, to the story and plot of the original. 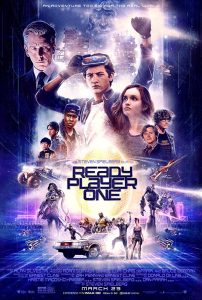 My own issues, come from the difference in pop culture references from book to screen, and that’s because of my personal attachment to these references, not anything closely related to the actual book or film.

And my entire argument, or old man rant, could be entirely reversed if you saw the film first, or if you have a different favorite pop culture reference that is in the film and not in the book. That’s just the way it goes.

But regardless of all that, Spielberg’s created something fantastic, scored by the amazing Alan Silvestri, it hits you in all the right places at all the right times. And I appreciate it for what it is. I’ll be sure to buy it and rewatch it from time to time, but I’ll probably do the same with the book once I get my copy back.

So go forth and enjoy. And to all of the posts out there that point out all of the references, you’re missing the point. You’re supposed to catch them for yourself and you’ll probably need a few dozen rewatches to catch them all.

There is no prize for knowing them all, the prize is the joy in seeing them for yourself. And for the record, they didn’t skimp on the references!

Now, go watch the film and get off my lawn!

Read the Secret File of technical information and quotes from Ready Player One (Film).

Whoever wants to reach a distant goal must take small steps.
The path of life shall lead upwards for you.
A difference, to be a difference, must make a difference.
More Fortunes >