A Special Report from Agent 76

I grew up with all types of music. As a kid, Heavy Metal and Motown ruled my house but I also listened to just about anything in between because back then, radio still had some variety. One day I might hear Earth Angel, and later that same day, perhaps Angel Of Death. As you might imagine I wound up with a very varied taste. All that stuff has its place, but this list isn’t really it. Sure, some that is on here, but for the most part, this “Songs A-Z” has a lot of new-ish stuff, some of it a bit harder to categorize, hopefully, a lot you’ve never heard and a lot you like.

I can hear you: “Æ isn’t the first letter of the alphabet.” Well, if you’re not willing to let me slide, then this song is dedicated to you; because it’s people like you who make me wonder if the End Of Days may not be such a bad idea after all. B – Bloodbuzz Ohio by The National

I’m a sucker for a rolling drum beat, and y’know, moody songs that almost feel positive. This song swims in regretful melancholy coupled with shades of “This Too Shall Pass”.

C – Cheer Up by Portugal. The Man

Yeah, cheer up! Those last two were cool but let’s get something bouncy in here! How about this one with a great Na-na-na-na-n-na-na chorus you’ll find yourself singing all week long.

Miike Snow is the name of the band, it’s not a person. I looked up the lyrics on this one and that didn’t help me understand it. If you understand it, you’re a better human than me. Congrats.

The best Gorillaz tracks are a blend of styles. Sometimes, it’s not just a subtle blend that happens in the track, oh no, sometimes it’s a firm right turn from soft melodic layers into a soulful and surreal auditory dream state.

F – Feel It Still by Portugal. The Man

When I first started this list this track hadn’t infected the world yet, I’m starting to hear it everywhere. I figure I’ll share this “stripped down” version with you. You’re welcome.

These guys again. The video is great. Maybe the villain and the hero always keep coming back to each other because there’s something deeper going on. This mini-movie is a lot of fun,  And the song is catchy as fuck.

H – Hold On by SBTRKT

I – I Need My Girl by The National

There are a few repeat artists on this list and this one is another fine display of melancholy mushy-ness.

Casey Neistat used this in one of his youtube videos and it caught my ear so hard I looked her up and found lots of simple, instrumental tracks I love

L – The Less I Know The Better by Tame Impala

Smooth and funky, a bassline front and center and it all bends into dreamy audio swirls that take you to some other era. The lyrics wistful, the images familiar. Yeah, I can dig it.

This track is from Tribe’s 1993 album Midnight Marauders. It’s a timeless work of art, go listen to the whole thing and then do it again. There are only a few songs on this list that I literally “Grew Up With” and this album (and Low End Theory) are personal classics.

N – Nobody Speak by DJ Shadow feat. Run The Jewels

A sick beat, crazy lyrics, and a nutty video of a government council meeting that turns into a full-on riot. O – Off The Grid by Beastie Boys

If you don’t know about the B-Boys instrumentals you’re just wrong. Find “The In Sound From Way Out” and “The Mix Up”. Go. Now. I’ll be here when you get back.

P – The Prisoner by Iron Maiden

Music from my youth. Brother Bob brought these guys and plenty of other heavy metal gods into my life and this is one of those “B-tracks” that doesn’t get enough play. (Editor’s Note: Agent Palmer likes Fozzy’s version of “The Prisoner” better, but what does he know!)

Q – Question! by System Of A Down

SOAD loves to throw into a hurricane of contrasts, a furry of hard thrash slams against the soft melodic of plucked strings, a slight pause, THEN BRASH HARD CYMBAL CRASHES AND YELLING. It’s good stuff.

R – Rhythm Of The Saints by Paul Simon

I am happy to say I know every word on this album. Every thumping drum, every hissing shaker, every dang triangle on this album. You should too. There’s nothing brash or complicated here, just truth in lyrics and heart in rhythm.

Fourteen plus minutes of spaced-out jazzy, progressive, mellow-funk weirdness from 1974. It’s a new find for me. Give it a chance, it builds. Kinda. Not really. …Dig it, man, this is what Ziggy Stardust listens to.

GUNSHIP is all about that retro 80’s synth sound and this moody diddy has a darkly fun pop culture soaked concept video that could only be done in claymation. So that’s what they did. 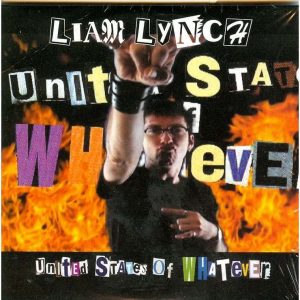 U – United States of Whatever by Liam Lynch

HOW CAN YOU NOT LOVE THIS?

If Amy didn’t move you, you should check your pulse. I like this acoustic version, simple, clean.

Who knew there would be so many W songs that I’d want to put on this list? I picked this one because of it’s all around simplicity–lyrically, musically, visually.

X – XTC Vs. Adam Ant by They Might Be Giants

Conversely, do you know how hard it was to find a song that I knew starting with X?! Check this one. It’s goofy. Kinda rocks at times tho.

Y – Young Liars by TV On The Radio

Zero because “zeroes mean so much” more than people give it credit for… and because after this, there’s no more.

Agent 76 is Bill Sweeney, host of The Wicked Theory Podcast and Preacher Vs Preacher: A Comparison Companion Podcast.

Things are turning for the bright side.
Courtesy is the password to safety.
Even a broken clock is right two times a day.
More Fortunes >