Luc Besson’s faithful adaptation, of his beloved childhood comic “Valerian and Laureline”, was full of expansive landscapes and cityscapes similar in their majestic scope to the beauty of The Fifth Element backdrops. And on DeviantArt, you can find a small selection of the work that Ben Mauro did for the film, including this beautiful piece of Mul and the Pearls that live there.

Mauro was part of the Art Direction and a Senior Concept Designer and his DeviantArt is full of more than just landscapes. But back to Besson, it is hard not to compare the pristine beauty of Mul to that of The Fifth Element’s Fhloston Paradise.

And if Valerian is one of the many recent films featuring fantastical landscapes, then we can’t leave out Star Wars as one of the first to bring us to lands of a galaxy far, far, away.

Sure there are plenty of locations to choose from in the Star Wars Saga, but Tatooine was where we first met Luke and it’s also where Jabba’s Palace resides as a turning point in Return of the Jedi, plus that Palace is pretty cool.

Oscar aka Ooxkr really captures the dust and grit of the Palace in the unforgiving landscape of Tatooine’s desert. Home to the Lars Homestead where Luke grew up on a moisture farm, the “wretched hive of scum and villainy” of Mos Eisley and of course the Great Pit of Carkoon in the Dune Sea where the Sarlacc pit is.

Not to be left out is the Marvel Cinematic Universe which, thanks to Thor and The Guardians of the Galaxy plus Phase 3, has finally taken Earth’s Mightiest Heroes off of Earth. And while there are a lot of interesting lands, Thor’s home of Asgard is always visually stunning, at least while it stands. 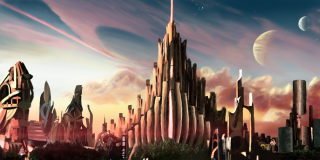 While Asgard is deeply based in Norse mythology, from which Thor derives, many people in the general populace didn’t get a visual representation (unless they picked up comics) until they saw it on the big screen in Thor.

This particular representation of Thor’s home from Aidan Wilson captures the essence of the place particularly focusing on the Asgardian Palace.

And beyond the science fiction of Besson, Lucas and Marvel, there is always fantasy. Fantasy has always laid claim to some of the more wondrous landscapes and the two largest franchises in that vein are Tolkien’s Middle Earth and Brook’s The Four Lands. 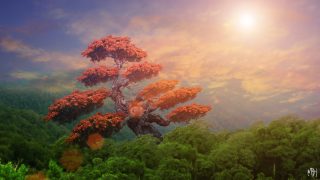 And Mads Bjerre Henriksen’s vision of the Ellcrys is as it should be, the red of the Ellcrys in stark contrast to the greenery of Arborlon in the glow of either a late morning or late afternoon sun. I’m not sure which as I haven’t studied up on my Four Lands geography recently.

But before Brooks wrote his fantasy epic there was another that was written by a master of fantasy, the grandmaster of fantasy to some, and his name is J.R.R. Tolkien. His world, that of Middle-Earth, is read the world over and thanks to Rankin/Bass, Ralph Bakshi, and perhaps most famously Peter Jackson, Tolkien’s world is now watched the world over as well. 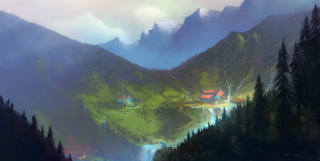 Artist Ralph Damiani’s Rivendell is only part of his series where he used his artistic talents to travel “Across Middle-Earth.” From the Arnor and the Shire to Rhudaur, Rhovanion and Rohan and a few parts in between, Damiani has captured it all so perfectly with his digital art.

There you have it. What other pieces of fictional landscapes have you come across in your internet travels that took you right back to the source material in your mind?

Also, these would also make great additions to your desktop wallpaper alongside these 50 Minimalist Pop Culture Wallpapers, I’ve already written about.

Even a broken clock is right two times a day.
Nothing in the world can take the place of persistence.
Your moods signal a period of change.
More Fortunes >