As a film adaptation, First Man is Mission Accomplished 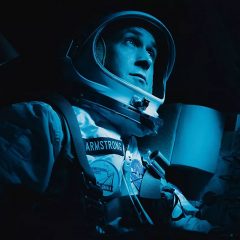 I’ve read First Man: The Life of Neil A. Armstrong by James R. Hansen, the main source material for First Man the film starring Ryan Gosling. I’ve also recently read books by the two other astronauts of Apollo 11; Buzz Aldrin and Michael Collins, and I’ve always been fascinated with the history of space flight from every documentary and film I could get my hands on including the seminal The Right Stuff and PBS’s Moonshot.

All of this is a long way to go to explain that my opinion, while not expert within the field of astronautics, is kind of refined when it comes to the history of NASA within both the written word and moving pictures.

So when I tell you that First Man is unlike anything you’ve witnessed in regards to one of NASA’s defining moments and the man who became the face of that success, I’m not pulling your chain. There is more emotion within this film, in relation to one singular character than we have ever seen in popular cinema.

Apollo 13 was compelling, but 90% of that emotion was based upon the situation, not the persons impacted, while we don’t get much aside from Chuck Yeager with emotion in The Right Stuff, exception for his derision with regard to the space program. 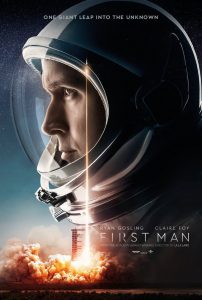 And speaking of Yeager, I was happy to see him portrayed in the film, because it meant that we got to see Armstrong the test pilot, even if briefly, because it was that experience that allowed him to become the first civilian astronaut NASA recruited within “The Next Nine” as they were called, as the astronauts named after the Mercury Seven.

What is compelling about the book is that there was a program called Dyna-Soar which envisioned a rocket plane, close to what we see at the beginning of this film and what those who haven’t seen the film would associate with Yeager in The Right Stuff, which was a scrapped program of which Armstrong was a part of.

There is a lot that this film sheds light on that you don’t get from those other previous films, besides character and emotion from the astronauts, which is relationships, especially between husband and wife. Sure, Apollo 13 had some of the relationship between Marilyn and Jim Lovell, but a good portion of that film is spent with them worlds apart. While in First Man we get to see Janet and Neil through the good and bad times, though ultimately the film depicts Armstrong’s work ethic as a hindrance to their relationship, though they had one of the more lasting marriages of the original groups of astronauts. I’m getting off topic, so back to the film.

The mix between archive footage and audio and what was created new for the film is very well done and without a discerning eye or ear, you won’t know which is which aside from some of the more iconic video footage that we’ve all seen countless times. The script is well laid out and it’s hard to ignore the fact that while this is a straight on biopic, the supporting cast is top notch, with some of the notables being Corey Stoll’s Buzz Aldrin, Kyle Chandler’s Deke Slayton, and Matthew Glave’s Chuck Yeager, which is probably the hardest of all the space film history roles to fill given Sam Shepard’s portrayal of Yeager in The Right Stuff.

My point, and I’m sure I lost a few of you along the way, is that this film is worth seeing. And it’s worth the theater viewing as well. The sound editing and engineering is something that works very well within a theater, or I’m sure a high-end surround system would do the same.

I guess, I just selfishly want this film to do well because there are more stories within the NASA archives, as well as other books that could be adapted, that I would love to see. Do I want to see the moon landing again? Probably not, it’s been covered now, but what happened next, especially in the lives of Armstrong, Aldrin, and Collins, is worth picking up the books for, because in some cases it is just as, if not more compelling than going to the Moon.

Seriously, you can enjoy this film in a vacuum, but you can also be well read, and still enjoy it. This film is literally for everyone. They don’t sugar-coat the truth, but the truth isn’t always pretty so that just keeps this film real. 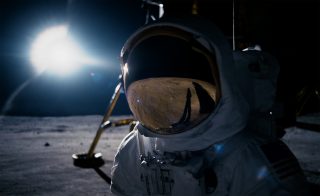 In my estimation or opinion, director Damien Chazelle and Josh Singer who wrote the screenplay deserve a standing ovation for their adaptation from James Hansen’s pages to the big screen.

It was a selective adaptation, but the book covers Armstrong’s entire life over the course of 600+ pages, so that’s a mini-series, not a movie. Are there things that I, the super NASAphile, would have wanted? Sure, but I can not fault them for anything that they left out of the film or anything that they focused on. And in that regard, First Man is a mission accomplished.

Read the Secret File of technical information and quotes from First Man (2018 film).

Things are turning for the bright side.
Your moods signal a period of change.
Even a broken clock is right two times a day.
More Fortunes >