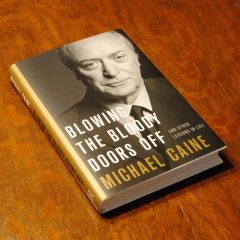 Michael Caine recently released his third autobiography Blowing the Bloody Doors Off: And Other Lessons in Life, the title of which comes from one memorable scene in The Italian Job. It joins What’s It All About? his first, and The Elephant to Hollywood his second.

I’ve now read all three and yes, there are some overlapping stories, but all three have a distinctive narrative because he is looking back from a different time in his life. The first book was released during his “retirement,” the second came out because there were more stories to tell, and now he’s not just telling stories, he’s giving advice.

It’s not preachy advice, it’s constructive advice, life lessons, if you will gained from his own life “with all its successes and all its failures, all its fun and all its misery and struggle, its comedy, its drama, its romance and its tragedy…”

As for the stories that overlap with the other books, they’re enjoyable enough to read again and he’s looking back with a longer lens with each book so the story may remain the same but the details may be different.

What are the life lessons? First off, they’re an accumulation of a lifetime and while they are sometimes related to acting, they are all applicable to any walk of life.

I’ll share with you the five pieces of advice I found most powerful, though all of them are profound and worth the price of the book.

1. “Whatever your walk of life, at work or in your personal life, don’t let your image imprison you. Don’t let how others see you decide what you can be. But be realistic: know what you convey, and use that to your advantage.”

“IF YOU MAKE IT in your universe, it’s because you keep doing enough of the right things. It sounds simple. It is simple. really.”

“…the best way to do a lot of good work is to do a lot of work. Don’t overthink it. Don’t agonise. Just go ahead and do it, and enjoy it, and learn from it.“

4. “It’s the small time experience that adds up to the big-time ability.”

He’s not preachy… He once was Peachy Carnahan in The Man Who Would Be King, but preachy he isn’t. That last piece of advice about disaster, he doesn’t follow it up with “and you should be the person who does,” he doesn’t. That’s the life lesson, that’s the advice, what you do with it is what you will.

Clearly, I’m a fan of Michael Caine, that should be obvious, but the man has a way with words, which is why I keep reading his autobiographies. This one, while not my personal favorite (that would be his first book What’s it all about?), is the one I would suggest people with only a passing knowledge of Caine read first.

Even if you don’t know him, the advice is solid, there is much more to this book than just the five pieces I picked out. But if I gave them all to you, you wouldn’t go and pick yourself up a copy. And even if you can’t buy a copy, go to your local library and pick it up. It’s worth your time.

And if you do pick it up, let me know what piece of advice resonates most with you and happy reading!

Read the Secret File of technical information and quotes from Blowing the Bloody Doors Off and Other Life Lessons.

Good clothes open many doors. Go Shopping.
The path of life shall lead upwards for you.
Fame and fortune are coming your way.
More Fortunes >