Countdown from Six to a Spoiler Free Review of Good Omens

Six episodes, five Queen songs in the fifth episode, four friends, horseman, and demonic wheels; three wheels on a tricar, two main angels (one fallen), and one flaming sword. And if that’s not enough to get you to watch Amazon Prime’s Good Omens, then remember, it’s based on the novel Good Omens: The Nice and Accurate Prophecies of Agnes Nutter, Witch written by Neil Gaiman and Terry Pratchett!

Before I get into my list, what’s all this about anyway?

Simply put, it’s about “an unlikely duo who team up to save the world.” For greater detail let’s say it’s the tale of a fumbled Armageddon featuring an angel, a demon, an eleven-year-old Antichrist, and a prophesying witch.

Numerically speaking, it all lays out thusly: 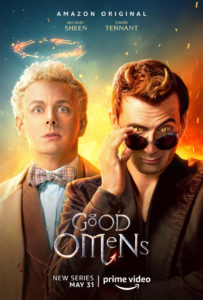 While I haven’t read the book, and I’m now intrigued to do so, the “British” approach to this show of doing more with less is one that I applaud. Six episodes of plot; Grade-A 100% Certified plot, no filler! It could have been done in seven or eight, but there was no need. This is the definition of more with less.

Yes, five different Queen songs in Episode Five, aside from Bohemian Rhapsody which is repeated throughout the series on numerous occasions. In fact, Queen is almost the de facto Soundtrack to this show; Bohemian Rhapsody, It’s a Hard Life, These Are the Days of Our Lives, Bicycle Race, You’re My Best Friend, Somebody to Love, Another One Bites The Dust, We Will Rock You, I’m In Love With My Car, plus Lazing on a Sunday Afternoon which was written by Freddie Mercury; and a few other artists and songs along the way. Did I mention this show has British sensibilities? 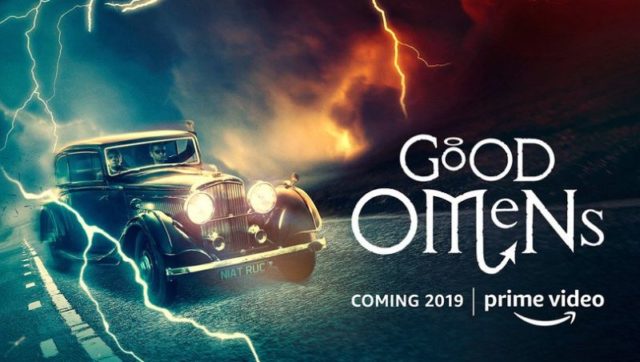 Ok, ok, so Pulsifer’s three-wheeled tricar isn’t really the star like the Bentley is, but it does give me a chance to talk about the superb supporting cast and we’ll start with Newton Pulsifer himself played by Jack Whitehall and then Frances McDormand as God, Jon Hamm as Gabriel, Michael McKean as Shadwell, Adria Arjona as Anathema Device, even Nick Offerman as Thaddeus Dowling. They all add to a spectacular cast headlined by two brilliant actors.

Yes, I totally cheated that one. 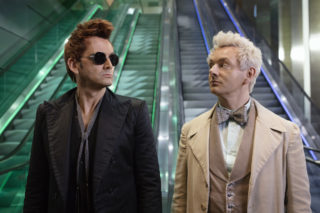 Crowley the fallen angel as played by David Tennant, and Aziraphale played by Michael Sheen embody their characters to the fullest, and are convincing in their portrayal of a 6,000-year-old friendship (of sorts). The proof exists in the long “intro” to episode three where we see that relationship develop historically in a series of vignettes that is extremely well cut together.

Well, it was either that or one god, or one devil, or one antichrist but I didn’t want to mess with religion, that’s what the show does! Sure I could have also said one book, as in the novel that this is based on by Neil Gaiman and Terry Pratchett, but I didn’t. Actually, the guard in episode 5 is reading a Neil Gaiman book, but not Good Omens, he’s actually reading American Gods while on his post. The flaming sword holds up really well, despite the fact that I thought it would grow cold by episode three, it is of the many comedic plotlines running through the show.

0 Countdown Over, Time for A Spoiler Free Review

All numbers and list items aside, this is a very well done show. I can’t speak to the adaptation, but as Neil Gaiman has stated that co-author Terry Pratchett’s last request to him before his death in 2015 was to write a screen adaptation, I would presume the adaptation is not only accurate, but that any changes were made for reasons of media; i.e. telling a story in novel form is different than telling it on television. 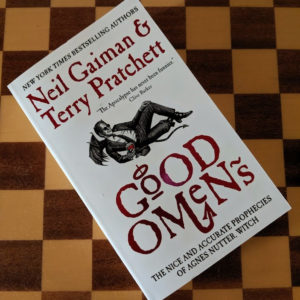 But taking the source material out of the equation, since I cannot comment on that, this show is wholly unique and brilliant onto itself. The dialog is top notch, the actors are fantastic and the special effects are realistic when they’re supposed to be and outlandish when it works better.

To that last point, there is a balance to this whole show, throughout the full six episodes that work for it from tragedy to comedy and from pithy to preachy.

This show, more than a lot of others I’ve seen recently, knows exactly what it is and executes without wavering. It is worth your time, and I would wager, I’ll eventually be saying something similar to the book.

Nothing in the world can take the place of persistence.
Even a broken clock is right two times a day.
To let another into your heart, first let yourself in.
More Fortunes >