The third season of Netflix’s breakout serial Stranger Things dropped on July 4th and it was a joy to binge all eight episodes. So, without spoiling it for those who had other things to do here are a few takeaways.

Growing up is hard to do in Hawkins!
Seriously, your first relationship and puberty are no picnic, but when the world is conspiring to create monsters that come after you and your young love, or your friends, the odd moments aren’t made any easier. Or perhaps, near death experiences would give you a little more light to see past your own growing pains?

Total Spielberg rip in every way, with the greatest respect, in the best possible way.
I’m not joking here. It’s not just one movie, it’s not just Goonies or E.T. or Indiana Jones, we’re talking about an overall feel for Spielberg’s work that existed in each of the prior seasons, but yet is magnified in a much more prominent and respectful way in this newest season.

Product Placement
Sure we notice the camera lingering on the Kit Kat, well done Hershey! And we notice the M&Ms, good job Mars, and Burger King does pretty well too, but the winner of Stranger Things Season Three product placement belongs to a short-lived 80’s blemish from a good brand, New Coke! Yeah, no spoilers here, they do discuss New Coke! 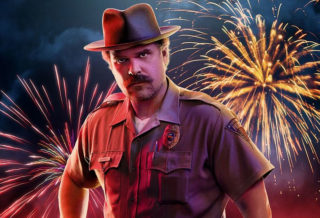 Hopper PI
Sheriff Jim Hopper’s Magnum PI mustache works. I honestly thought, this is gonna get old, but even when he starts dressing a bit like Magnum I bought into it.

Ok, so there’s a lot more to this third season of Stranger Things. But I don’t want to spoil it. There’s totally a lot more, but in order to keep it spoiler free cuts have to be made. If you’ve completely missed the boat on Stranger Things let me be just one of many who are telling you to invest the time.

Seasons 1 and 3 have eight episodes apiece, while Season 2 has nine. Each episode comes in around 58 minutes or so, and if you’re a fan of Spielberg and Amblin, you’ll be entertained and then overcome with feelings of nostalgia, because that’s the way it is.

Sharing little joys offer great hope to others.
Things are turning for the bright side.
To let another into your heart, first let yourself in.
More Fortunes >