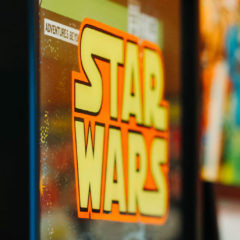 …is a sentence I never thought I’d type. But I’m trying to read as much of the new canon content as possible, and Ahsoka, by E.K. Johnston had reviewed well. That led to Rae Carson’s Most Wanted, but more about that later.

Ahsoka, surprisingly enough, focuses on Ahsoka Tano and sets about filling in the gaps between Clones Wars and (slight spoiler warning) Rebels. With Ahsoka on the lam from the Empire, the story follows the former Jedi padawan as she attempts to build a new life for herself.

Even in the Outer Rim, the Empire is never far away, and after swapping one backwater moon for another and befriending some local farmers, Palpatine’s military machine turns up. For some reason, there are flashbacks in the book, not only told from the title character’s point of view, but also others. Which I found weird.

Should you read the book? That depends, if you like Ahsoka as a character then this definitely helps flesh out her story. The book also gives insight into the everyday running of the Galactic Empire, the fledgling Rebellion and there are a few familiar names that pop up. There’s also an Inquisitor who serves as Ahsoka’s main foe. I wish he’d gotten more of a back story.

There’s a lot of cool stuff in the book, although it felt like a chore early on, only getting good toward the end. It’s a short book and it took a long time to read, which I guess says a lot. All in though, I’m glad I read it, and would definitely recommend it for younger readers i.e. its target audience.

Now for Most Wanted by Rae Carson. This book is set immediately before the events of Solo: A Star Wars Story, and follows Han, Qi’ra and a Rodian named Tsuulo. The story starts with Han and Qi’ra competing against each other to become head boy/girl of the White Worms gang. Naturally, something goes wrong and the pair have to work together if they’re going to survive.

The plot itself is essentially pointless and does nothing for the greater Star Wars universe. It’s just a McGuffin used to give some insight into life in a gang, the different gangs knocking about and general life on Corellia. Although the Empire is present, they don’t really have much to do with anything.

To touch on the nerdy, techy Rodian for a moment, Tsuulo is well-written integral character who has a good back story and would have been a fun addition to any other Star Wars story, but if you read the book, you’ll understand why he’s never heard from again. Han is just the same Han we meet in his movie. 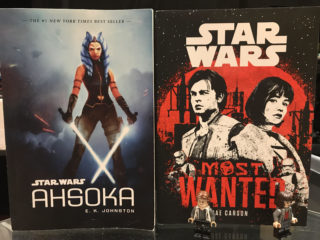 What the book actually achieves very well, is that it sets out the back story for Qi’ra that we never got in Solo. Despite loving the movie, I was left cold by Qi’ra’s character and never understood the motivations for her actions. What Carson has done, is written a story about Qi’ra, that also features Han and Tsuulo.

Should you read Most Wanted? I bought it partly for my love of the movie, but also because it was very cheap on Amazon. At full price, I would gladly let it pass me by. Qi’ra isn’t an endearing character in Solo, and this book doesn’t change that opinion, but it explains a lot about her character that goes some way to fleshing out the decisions that she takes in the movie. Unlike Ahsoka, it’s otherwise immaterial to the actual Star Wars universe (unless we get a sequel to Solo).

To its credit, it didn’t feel like a cash-in on the movie. You can read the book without having seen the movie. It didn’t actually feel like a Star Wars book. You could change Han and Qi’ra to Hank and Kiera and have an interesting gangland story. There’s a lot of potential that just isn’t realized, probably because of the restriction of knowing what happens next. Which is always a challenge when writing a movie tie-in.

So… can adults enjoy Star Wars stories aimed at a younger audience? Yes. Most Wanted definitely felt like I wasn’t the intended reader, at times the pacing felt like it was being unnaturally tweaked to build tension with the side effect of being a little jarring. Emotions were also written about in a way that seemed to over-explain, but I guess for young adults this probably works quite well and when my girls are older I’d be happy for them to read it. Ahsoka’s writing style felt more adult.

My hesitancy to out-and-out endorse the books isn’t down to the style of writing. Despite being nearly middle-aged, I didn’t feel alienated or patronized. My beef with Ahsoka is that it should have been longer and better paced. Things were hinted at that could have been explored more, especially with how it fits in with the overall saga. For Most Wanted, it’s just that the story wasn’t engrossing.