The show follows a caveman “Spear” and a Tyrannosaurus “Fang” brought together in the pilot episode by tragic circumstances, and for the remaining episodes that have been released, we see the two working through challenges and enemies to continue their shared survival.

Spear is simply a caveman with a spear, while Fang is a female Tyrannosaurus, and the development of their relationship through the trials of just simply surviving is beautiful. But survival is violent.

But the show is violent for the sake of realism, not for the sake of excessive gore or carnage. Survival isn’t pretty, and it isn’t clean, and this show doesn’t attempt to sugar coat any of it. Of the five episodes that have aired most have bloodshed, but all are story related and there is respect in the way this violence is portrayed.

One of the things that make the depicted violence work on screen is the animation style, which hearkens back to a more organic less pixel-perfect style. I would argue that this is less a cartoon in a broad sense and more of an animated series. Calling it a cartoon, puts it into a class where it is equal to Looney Tunes or ThunderCats or Pokemon, and it’s just a more elevated art form than those. 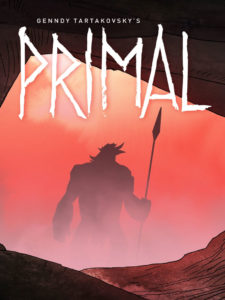 Sure it’s heavier subject matter, but it’s more than that, and the lack of dialog speaks to that elevated artform of Primal. There is some “roaring” by Fang and roaring that is more akin to screaming from Spear, but there is no dialog within the series, and the nonverbal communication between man and dinosaur are so well intuited that you don’t question the communication.

Not to be forgotten, the music by Tyler Bates and Joanne Higginbottom serve to create a drama heightened or eased beyond that which we see on the screen. The music also gives hints into the minds of our two main characters, Spear and Fang, so that we can intuit what they are feeling through the music. In that regard, the score to this animated series is basically a supporting character, and it deserves all the credit and attention that one can call upon it.

The show premiered on October 7th, 2019 on Cartoon Network’s Adult Swim. From Genndy Tartakovsky, the man who brought us other Cartoon Network stalwart programming such as Dexter’s Laboratory, Samurai Jack, Star Wars: The Clone Wars, plus had a hand in The Powerpuff Girls, this is not surprisingly brilliant, it is surprisingly simple and that is why it is brilliant.

The series will consist of at least one season containing ten episodes, the first five of which have already been released, with the remaining half being released in 2020.

The episodes that have aired so far, with a one-line description are:

This is a series which is meant to be watched in order, and I would say a binge does make for enthralling entertainment, so I’m not surprised that a movie version of the series has been submitted in the Animated Feature Film category for the Academy Awards, and it should compete well in the category if not win.

Primal is epic, and beautiful, in an artistic direction that I would not expect anyone to have attempted in 2019. The idea that visual storytelling can be a complete narrative with no dialog and mostly non-verbal communication between its two main protagonists is truly unique within mainstream circles, which is why this stands out.

Courtesy is the password to safety.
You are interested in higher education, whether material or spiritual.
To let another into your heart, first let yourself in.
More Fortunes >