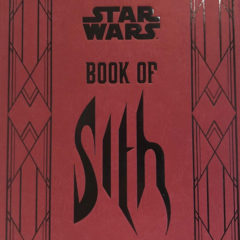 The premise, for lack of a better word, is that great texts have been written over several thousand years, mostly by various Dark Side leaders and scholars, excerpts from these texts have been recovered by the Jedi, then Darth Sidious, whose manifesto ends the book, then Luke Skywalker. There are scribblings all over the books by those who’ve studied them including Yoda, Luke, Vader, and others, added while the texts have been sat in the Jedi archives. These add a lot of insight into how the texts were viewed by different practitioners of the force.

This is actually the first Legends content I’ve ever picked up, as I’ve rigidly tried to stick to Canon content. And I wasn’t disappointed. I’ve always had a fascination with the main antagonists in the Star Wars universe. Where do they come from? Why the rule of two? How are they so powerful? The best part of the Phantom Menace was Darth Maul, but the Dathomirian had less than six minutes of screen time. 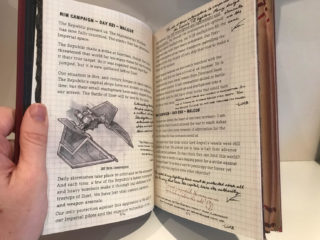 The content covered by the texts in this book give personal insight to the actions that not only created the Sith Order, the challenges faced when the Dark Jedi left the Jedi Order, through to the Nightsisters’ unique views on the dark side of the Force. While the content isn’t canon, you don’t need to be familiar with any of the other Legends books to enjoy this. It works really well as a stand-alone book.

The attention to detail that has gone into the physical book itself is stunning. This is as much a work of art as it is a piece of fiction. Each section has its own font and paper style, and the illustrations that pepper the book have been drawn by a number of different artists. No section feels like the next. It belongs on your bookshelf simply because it’s a beautifully constructed book, but also has the depth of content to keep you interested.

A difference, to be a difference, must make a difference.
Even the greatest of whales is helpless in the middle of a desert.
Whoever wants to reach a distant goal must take small steps.
More Fortunes >