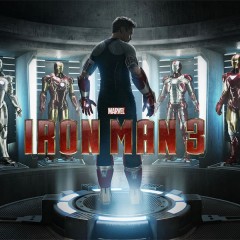 The answer… Yes it does. 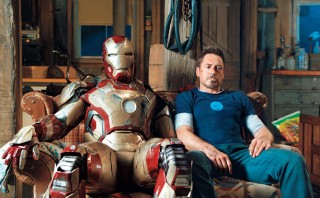 Tony Stark and Iron Man Suit Relax on the Couch

Back to the review, the third installment of Iron Man fits very well within the framework of the first two. Tony is evolving, his armor is evolving (there is a whole lot of new tech coming your way) and his conscience is evolving. Thus in reality, this movie is much more about Tony Stark the man, than Iron Man the machine. He isn’t in the suit for much of the movie and that suits me just fine. Unlike some of his Avengers counterparts, Tony Stark is an interesting character unto himself, even without the suit. You can’t say that about Cap or Thor, maybe Banner but still it’s the truth.

Shocker Alert! Tony has a past! The setup for this movie predates and includes the first Iron Man, where he meets Yinsen, who he meets again in an Afghan cave and where he manages to make an enemy as well. This shows Tony’s boozing, partying past.

Flash forward to present day, post Avengers battle in New York and we have a much mellower Tony who can’t sleep and has anxiety. Tony’s anxiety adds a level of reality to the movie not seen in most superhero movies and depending on your publisher of choice, maybe not even in most comics. It makes him more human, more real, and more relatable.

Tony Stark having a Panic Attack

Commonly, when drug addicts recover they replace that drug addiction with another addiction. Tony, not a drug addict but a party animal has a bit of a void in his life. This void manifests itself post events in New York as anxiety attacks. Now I’m not a doctor so I won’t call it post-traumatic stress syndrome (let the kid do that!). I completely buy that Tony would have anxiety after giving up we will call the Playboy lifestyle. Again, I enjoy my superheroes more when they have some faults.

Relative to his anxiety he gets back to his roots as a tinkerer and a mechanic who builds things. We get to see Tony Stark storm a building with trinkets and gadgets not full Iron Man armor. This is Tony Stark! He is more than just a man in a suit. 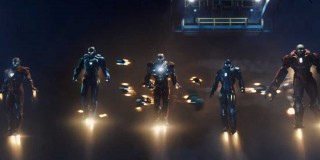 Aside from the great storytelling set up with the post credits payoff there is a lot more tech in this movie than we’ve previously seen and I’m not just talking about sheer numbers, I’m talking about variety, the Iron Legion. Stealth Armor, Aquatic Armor, Asgardian Destroyer Armor, Brute Armor, Deep Space Armor and many more. This bodes very well for what we might see in future Iron Man movies, as well as any Avengers or any Marvel movie in which Iron Man might happen to make an appearance.

I’d be remiss if I didn’t say there is a scene in the movie where I thought to myself, a fun subtitle to the movie might be, “Sometimes when you play with your friends you hurt your girl.” But that’s up for discussion as it is just one scene. 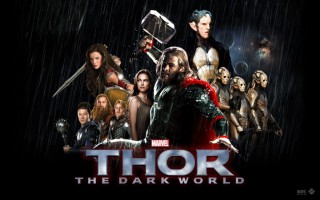 The acknowledgment of the events in New York and the Avengers is throughout, thorough and fairly realistic. I’m not sure if it was something they had to do, but I’m very glad they did. You can still enjoy the movie as part of just the Iron Man series having never seen Avengers, but you’ll get a little bit more out of it if you had.

Overall, considering all the factors, I thought it was a great movie and quite possibly, the only one that could have followed Avengers. Up next in the Marvel Cinematic Universe is Thor: The Dark World. We’ll see how they tie that into the universe they’ve created.

Read the Secret File of technical information and quotes from Iron Man 3.

Look forward to great fortune and a new lease on life!
Nothing in the world can take the place of persistence.
Let’s finish this up now, someone is waiting for you on that.
More Fortunes >