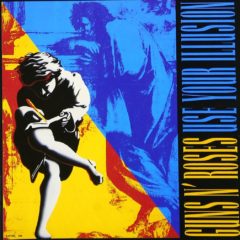 Anyway, that’s it. Select the tracks and see what you can build-out of the 30 tracks that make up both albums. And that’s what I did. So, before I give you my total album, let’s talk about my process.

First, I listened through each album with 8 columns on a spreadsheet, because why not try to make this arbitrary exercise as scientifically merited as possible. Those columns were Track #, Title, Album, Duration, In, Out, Maybe, and Play.

The process was to listen to the tracks and at first add the duration into either the In, Out, or Maybe columns. That way I could see where I was at with a total at the bottom of each column.

After the first listen there were only 9 hard ins to make my album; three from UYI I and Six from UYI II. There weren’t that many hard outs at this point but let’s talk about those that I removed from consideration immediately. 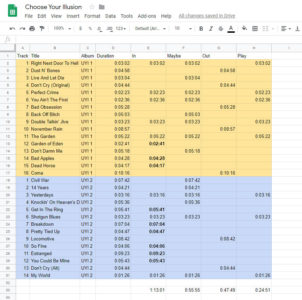 Dust N’ Bones was out due to time consideration. I don’t love it at almost 5 minutes in duration. Both Don’t Crys are out as well as November Rain, because Estranged is my favorite of the three epic songs from both of these albums and I didn’t have the room for any more. Bad Obsession and Locomotive were also out on time considerations as was Coma at over 10 minutes. These immediate cuts saved me a runtime of 47:49 in decisions.

I don’t hate any of the songs I cut, but if I don’t love it, the duration means I can get more tracks into the 74-minute hard cutoff.

Garden of Eden, Bad Apples, and Dead Horse were guaranteed from UYI I, because I absolutely love all three of those tracks. From UYI II Get in the Ring, Breakdown, Pretty Tied Up, So Fine, Estranged, and You Could Be Mine were also guaranteed. Historically, I did tend to hit play on UYI II more often, so it’s not a surprise more songs were definitive ins.

But that left 14 tracks at a run time of 55:55 in the Maybe column, which is where the Play column comes into focus. At this point, I’m just adding stuff into the Play column to play around and see what combination of tracks gets me closest to the promised land without leaving too many good scraps on the cutting room floor.

Now before I discuss the Maybes and what made it into my final Choose Your Illusion selections, let me bring you into my head as far as two songs and a discussion I had with myself. The two big covers. Do I try to include one, both or neither? While I do appreciate Live and Let Die and Knockin’ On Heaven’s Door as covers, I ended up going for neither because, in the end, I was leaning more towards Knockin’ On Heaven’s Door, but at a run time of 5:36, there were other songs I would rather include. So, in the end, I decided to skip both of the major cover songs that were both released as singles. 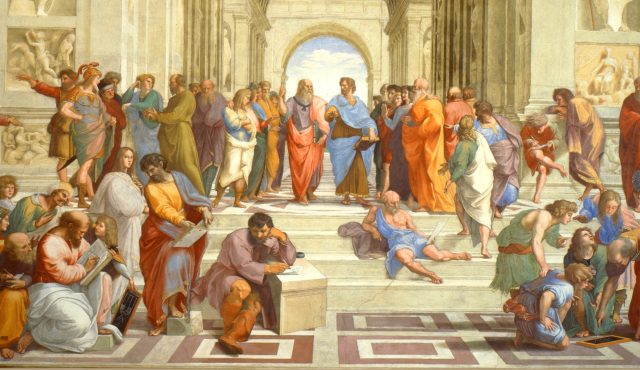 Remaining Maybes from UYI I

At this point, I removed Back Off Bitch, Don’t Damn Me, and Civil War from consideration just on time. But I also moved The Garden, the only remaining 5 plus minute song left into the Play column because I wanted to make sure it made it in. 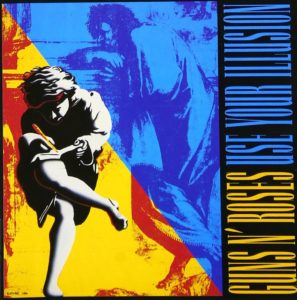 And now, the rest was just about what combination got me the most bang for my buck. I was fine with quantity because I had already narrowed the songs down to the quality of my enjoyment with the remaining Maybes to be about equal. So after playing around in the Play column, I ended up with a final runtime of One hour, thirteen minutes, and one second. The draft prior to my final selections was over by 1 minute and 54 seconds.

So, here it is. Agent Palmer Presents Choose Your Illusion from Both Guns N’ Roses Use Your Illusions: (I’ve color-coded the tracks Orange for UYI I and Blue for UYI II, so you can see the breakdown.)

So I ended up with not a punk album, which is possible because there are quite a few short tracks available on both of these albums, but what I think is a balanced and pretty great rock album. Yesterdays ends up being a cleaner track because we know albums can’t be all go, go, go, or at least I prefer they aren’t and So Fine is there because Duff needs a chance to shine, too.

But that was my process… Now, if you made it this far you can do a few things. Listen to Our Liner Notes (@olinernotes), where Henno (@idahenno) and I each discuss our Choose Your Illusion sections (Coming Soon), you can make your own album, or you can just leave comments or tweet me (@AgentPalmer) about how you like, dislike, agree, or disagree with my Choose Your Illusion album.

Below is the YouTube Playlist of my Choose Your Illusion Album.

Today it’s okay to make a few choices by going with your instincts.
Nothing in the world can take the place of persistence.
Fame and fortune are coming your way.
More Fortunes >