Netflix’s Dragon Quest: Your Story has Action, Comedy, Romance, and of course Slimes!

Dragon Quest: Your Story, A Netflix Original Anime Film, is as faithful a video game adaptation as I have ever seen on the big or small screen, period the end. It is based off of Dragon Quest V, released initially for SNES, then re-released on PS2, and a few handhelds. While I haven’t played any game in the series for a while, it is one of my favorite series of video game RPGs dating all the way back to when the series was called Dragon Warrior.

And while I can remember that I haven’t played my favorite version of the series Dragon Quest VIII on my trusty PS2, I have been meaning to get back into that again. While things have taken me away from my RPG playing, when this anime of Dragon Quest: Your Story finally was released on Netflix, after getting a theatrical run in Japan grossing $13 million at the time, I couldn’t say no. I had to press play. 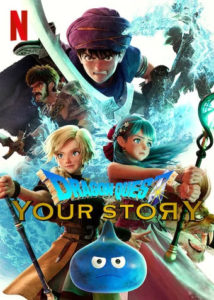 Is this a great film? I don’t think I can say so, because I am the target audience. I know the story beats because I’ve played the game. And while not all RPG series are the same, they all have similar beats, so while you don’t know what’s coming, you get a sense when something is coming. It’s a player’s intuition.

The plot “Luca follows in his father’s footsteps to rescue his mother from evil Ladja. Finding the heavenly hero who wields the Zenithian sword is his only hope.” Again, it’s basically Dragon Quest: V, but this isn’t your average video game adaptation.

The intro features a montage of game footage through the many ports that Dragon Quest had (Dragon Warrior, at its very beginning) to set up the story, which is a brilliant artistic touch, that you don’t even have to have played the games to appreciate.

But those that have will recognize the many sound cues and the main orchestral themes that are as prevalent in this adaptation as they are in the game. Games keep on evolving graphically.  And since games have changed from both 8-bit music and graphics to fully rendered 3-D graphics and full orchestral scores, I can talk about how this animation is exceptional.

Except that while I haven’t played a game in the series for a while, the actual animation for the film and the animation in cuts scenes don’t feel much too far removed from each other, so it’s not hard to get used to watching this. And of course, it looks amazing, but it’s odd to watch the whole thing without certain things… Most notably a controller in your hand.

There is no traveling in the sense of walking across a world map while encountering random monsters that allow you to level up. Though the movie does show a few montages of such travel. In games, however, we don’t get montages, and the montages in the film that are about a minute or less, take gamers hours to do, depending on if you’re trying for speed or to level up for more power, or just collecting money. 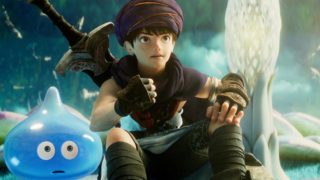 As such, there are also no side quests. And while there are hints to all of the monsters in the game, I’m aware such things couldn’t be done because well, you have to get through the main story. That’s the purpose of a film!

But there are hints to all of it, and that’s one of the things that makes this a faithful adaptation. At some point in the series the concept of “collecting” monsters was included, and those monsters, mostly all of them from one watch, probably all if I watched it a few more times (and I will) with a keener eye, all get a moment or at least some screen time. Even the elusive silver Slimes and King Slime make appearances, which I found absolutely delightful.

The original film was done in Japanese, but there are dubs in English, German, Spanish, and French, plus you can watch it with subtitles on in English, Japanese [CC], Simplified Chinese, Spanish, or Traditional Chinese. Watch it how you choose.

There were adaptations… There were two animes that were created and there is manga, but a feature-length treatment is something different entirely.

And as much as I’d like to write that they should make a series of movies from Dragon Warrior through Dragon Quest XI, as long as it was cost-prohibitive. I know it’s unlikely, and I’m super excited that “Your Story” exists, to begin with, and it’s done so well all around, that maybe this is where it should stop, so it doesn’t get diluted, after all, we the players still have the games for ourselves.

In fact, one of the more powerful reasons video games resonate is one of my favorite lines from this film; “The worlds that these games brought to life, they’ve never been fake to me. Not in the least. Even if they were only programs, the time that I spent with them was real. And these journeys, these battles, everyone I met, to me it was all true.”

There’s action, comedy, romance, and of course SLIMES! What more could you want from a Dragon Quest film or any film?

Read the Secret File of technical information and quotes from Dragon Quest: Your Story.

Today it’s okay to make a few choices by going with your instincts.
A difference, to be a difference, must make a difference.
Things are turning for the bright side.
More Fortunes >