9 Holes with The Legend of Bagger Vance 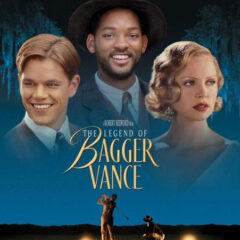 It has been a while since I went out and did 18 Holes with Tin Cup, so let’s take it slow and stick to just the front nine; with this Rober Redford directed film, based on the 1995 novel of the same name by Steven Pressfield, starring Will Smith, Matt Damon, and Charlize Theron.

What is it? It’s a fable of sorts, an allegory for golf and life (as most golf movies are), about Rannulph Junuh (Damon) a local golf hero who is suffering from post-traumatic stress since surviving World War I with distinction, having been awarded the medal of honor, who gets dropped into an exhibition match between Bobby Jones and Walter Hagen, to save Junuh’s ex-girlfriend’s (Theron) late father’s dream golf course, which of course was hit badly by the Great Depression. Of course, a mysterious caddie (Smith) appears before the match.

So let’s warm up with a question asked by Jack Lemmon, who plays the narrator: “Why do I play a game that seems destined to kill me?” For his character, it fits, because he has another heart attack while playing golf, and we get the entire “Legend of Bagger Vance” in flashback.

Rannulph Junnah: Now, the question on the table is how drunk is drunk enough? And the answer is that it’s all a matter of brain cells
Hardy Greaves: Brain cells?
Rannulph Junnah: That’s right Hardy. You see every drink of liquor you take kills a thousand brain cells. Now that doesn’t much matter ‘cos we got billions more. And first the sadness cells die so you smile real big. And then the quiet cells go so you just say everything real loud for no reason at all. That’s ok, that’s ok because the stupid cells go next, so everything you say is real smart. And finally, come the memory cells. These are tough sons of bitches to kill.

I don’t know if this comes directly from the book or from the screenwriter Jeremy Leven, but for a man who understands where his demons are, he’s got it locked on how he is determined to beat them. Also, Damon is superb in the role all around, but his delivery here, at a poker table, really is on point. 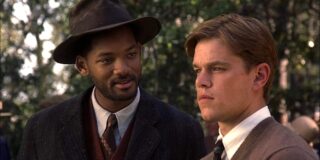 “Yep… Inside each and every one of us is one true authentic swing… Somethin’ we was born with… Somethin’ that’s ours and ours alone… Somethin’ that can’t be taught to ya or learned… Somethin’ that got to be remembered… Over time the world can, rob us of that swing… It get buried inside us under all our wouldas and couldas and shouldas… Some folk even forget what their swing was like…” – Bagger Vance

I like the idea of these metaphors coming from Bagger Vance. He’s tryin’ to reach Junnuh in a deeper life kind of way, fixing his inner demons will fix his golf game, but it’s a much harder thing to do. And since Junuh is concentrated on just fixing his game, and not hisself, well, Vance has all the more work cut out for him. Still, as I learned in Tin Cup with Romeo, caddies are just as psychological as they are full of gamesmanship and strategy. 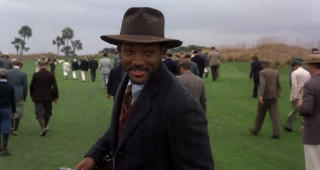 Once Junuh’s game goes bad, the local Judge and Junuh’s former girlfriend demand to know what is going on with the “advice” as they see Vance is parlaying to Junuh. His reply of “he is and he ain’t” is met by confusion to the two inquirers, but to Vance, he sees it as Junuh battling with his demons, and he doesn’t know who will win.

Rannulph Junuh: This is getting embarrassing.
Bagger Vance: Oh no sir, this has been embarrassing for quite some time now.

Sure, Smith and Damon nail the delivery, both verbally and non-verbally, on this exchange, but I enjoy the larger point. If it feels embarrassing now, chances are it has been. Example, if you feel you’ve made a wrong turn, chances are you went down the road a bit, so the wrong turn you made is well behind you. Back to the film, the chemistry between Smith and Damon is great overall, but this might be exhibit A.

Rannulph Junuh: You feelin’ sorry for yourself because your daddy’s got to sweep streets?
Hardy Greaves: He ain’t the only man who can’t get work. Wilbur Charles’s dad can’t get work neither, but he says he’d rather do nothin’ at all than something beneath his dignity.
Rannulph Junuh: Grow up, Hardy.
Hardy Greaves: It ain’t time for me to grow up, Mr. Junuh.
Rannulph Junuh: Your daddy’s out sweepin streets because he took every last dime he had and used it to pay up every man and woman he owed and every business who worked for him, instead of declaring bankruptcy like everyone else in town, including your best friend Wilbur Charles’s dad, Raymond, which is why he’s able to sit around all day long on his dignity. Your daddy stared adversity in the eye, Hardy, and he beat it back with a broom. 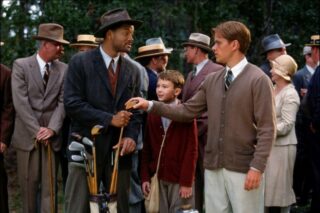 This conversation about adversity, isn’t the only one in the film, far from it. But it is the most generous. What Hardy Greaves’ father does, and it’s only in this discussion that we even learn about what his situation was through the Great Depression, is a very generous overcoming of adversity, which is nice, because every other discussion about adversity in the film is about personal adversity, and bettering oneself, as opposed to being there and supporting those around you. In this regard, Hardy’s father may be the best man in the entire film.

“It’s fun. It’s hard. You stand out there on that green, green grass and it’s just you and the ball, and there ain’t nobody to beat up on but yourself. Just like Mr. Noonan keeps hittin’ himself with a golf club every time he gets angry. He’s broken his toe three times on account of it. This is the only game I know you can call a penalty on yourself if you’re honest, which most people are. There just ain’t no other game like it.” – Hardy Greaves

There are plenty of other games that take place in the mind, most of them in fact, but few are solo endeavours like golf. In truth, Hardy is right, “there just ain’t no other game like it.”

Our narrator, Jack Lemmon, says that when Junuh was playin’ well he had learned, as Vance put it “how to stop thinking without falling asleep…”

I love that quote. There’s something about thinking and sports that just does and yet doesn’t go together. Think of Bull Durham’s Nuke Laloosh. He did better when his mind was empty, and so did Junuh. But not all things are like that. But the ones that are… Best to clear your mind.

If this were a riddle, the answer could also be life, which can only be experienced (or played) and never won, because no one gets out alive.

Turning in the scorecard 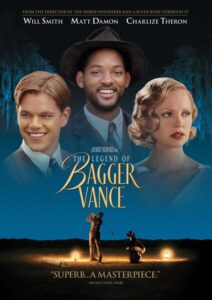 We finished one over, but I have a feeling we’d have made it up on the back nine had we done a full 18 holes.

There are other Bagger quotes worth mentioning:
“Ain’t a soul on this entire earth ain’t got a burden to carry he don’t understand.”

“But there’s only one shot that’s in perfect harmony with the field. One shot that’s his. Authentic shot. And that shot is gonna choose him. There’s a perfect shot out there tryin’ to find each and every one of us. All we got to do is get ourselves out of its way. Let it choose us.”

“Your hands is wise than your head ever gonna be.”

But all in all, the film is well-written, directed, and the actors do what they are supposed to do, they melt into the story. So, don’t forget to stretch before you get moving, and as always, see the field…

Read the Secret File of technical information and quotes from The Legend of Bagger Vance.