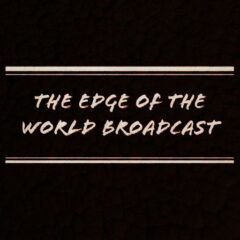 In just under 90 minutes, Season One of The Edge of the World Broadcast, a podcast created by, written, and starring Joel Mengel, will bring you back to a simpler time, when zombies weren’t just a trope, they were great fodder for storytellers to write thrilling and mysterious tales.

So what is it all about? “The End of the world has come and gone and survivor Delsin Moore discovers a still functioning Numbers Station, becoming what could be the last voice going out into the void…”

The world that Mengel has created in The Edge of the World Broadcast is both wondrous and mysterious. As the episodes roll through from one to nine in season one, we get to know Delsin and what happened to him and the world at large. But not everything is presented to us, and what you don’t know serves as a way to crank up the mystery.

As storytelling goes, Mengel is firing on all cylinders. In fact, episodes one through five; New Beginnings and Strange Places, Home Sweet Home, Files and Tribulations, Scotch and History, and The Free State all not only establish who Delsin Moore is but the state of the world that we have joined him in.

And the fact that you don’t know everything, all at once, all the time, means that you can enjoy the story as it unfolds. This series is a throwback to classic radio shows, like The Shadow, and while the effects are more modern and not as over the top as you might hear on those classic shows, the feel of this show is close enough to classic radio plays that you can hear it in the DNA of this show. 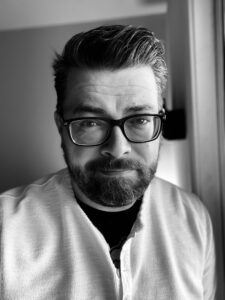 Honestly, this is only the second fictional podcast I’ve fallen in love with, the first being The Reigning Lunatic, but it reminds me that audio isn’t just for discussions and conversations. Podcasting is a great medium for storytelling, and both The Reigning Lunatic (comedy) and The Edge of the World Broadcast (thriller) are great examples of just why the medium is so good for storytelling.

Mengel’s voice isn’t the only one that you will hear over the course of season one. He’s tapped some talented individuals around him to bring other characters to life.

I enjoyed The Edge of the World Broadcast so much that I invited Joel Mengel on to discuss it on an Episode of The Palmer files. In the meantime, listen to Mengel’s show and tell, Palmer sent you. And let me know what you think of season one… There’s still plenty of time before season two arrives to compare our respective theories.

A difference, to be a difference, must make a difference.
Even the greatest of whales is helpless in the middle of a desert.
The path of life shall lead upwards for you.
More Fortunes >