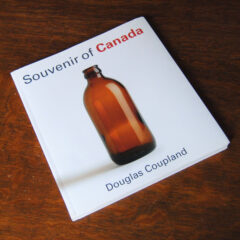 The format remains the same, but the scale is understandably larger. The goal, after all, was to share Canada with the world, and it also seems to re-introduce Canada to itself. At least, that’s the way I sometimes read it.

It’s in those places that the book differentiates itself from other travel books or books of national pride. This book is intended for anyone, but Canadians will read and remember or reminisce as others simply read in wonder.

At the same time, as a reader you get the sense that some of the thoughts in these pages are ones that Coupland has been wrestling with. These aren’t things that he’s just thought of to write this book. They were probably in him all along.

A good portion of them revolve around Canadian identity and history. When you pair the following two paragraphs together, you feel for Coupland, who was likely dealing with this stuff before. Now, he probably can’t get people to stop talking about it. That was even more likely the case back in 2002 when Souvenir of Canada first hit the bookstores. 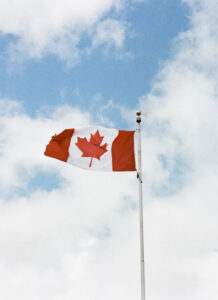 But that’s not all there is. This book does introduce plenty of facts or statements about Canada that are new to me and also downright thought-provoking.

As interesting as those things are, there’s one statement that personally resonated with me.

Contextually, you need to know that a while back, I co-hosted Our Liner Notes, a musical conversation podcast, during a series on Canadian Content (CanCon), because the main host of the show, Chris Maier is Canadian. We discussed CanCon mainly in terms of music but also diverged along the path into other mediums. And CanCon that can be described as broadcast media in Canada must have a certain percentage that was at least partly written by, produced, presented, or otherwise contributed to by persons from Canada. 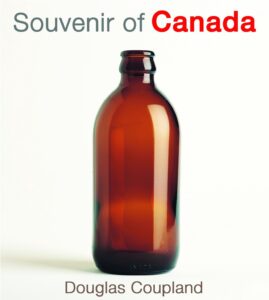 The entire concept was best summed up in this book by author Coupland. While I understand CanCon from an internal view, because that’s how Chris explained growing up with it to me, to an outsider, Coupland’s perfectly states that, “Canada has to crank out enough Canada-osity to justify our existence as a full-blown country. It’s work.” And I think it helps create a sense of self in Canada. As a citizen of the United States of America where, ignoring even political discourse, we’re fractured as a society, I long to have a national pride as Canadians do.

Despite the East and West mentalities, and the “flyover” parts of the Canadian prairies, and the English versus French fueds, this book shows that Canadians are all still Canadians. Here in the U.S., I’m from Pennsylvania. While it’s in the same region as New York, New Jersey, and Maryland, it makes me separate from them. Don’t even get me started in intrastate regions. Americans are divided. It’s how we always are. But reading Souvenir of Canada, it feels like Canadians are less divided.

Perhaps it’s about their small numbers, despite the vast tracts of land over which the country is sprawled. Even if you’re not going to Canada, this is a souvenir worth your time. I would love to see more travel books written by locals who tell it as Douglas Coupland does: with truth, honesty, and a cynical sense of nostalgia!

Let’s finish this up now, someone is waiting for you on that.
Even a broken clock is right two times a day.
Fame and fortune are coming your way.
More Fortunes >